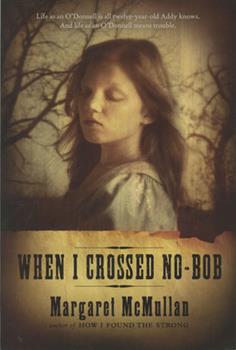 This novel takes place 10 years after HOW I FOUND THE STRONG ended and deals with the reconstruction and race relations after the war. Told from the point of view of 13 year old Addy, who is abandoned by her redneck family and taken in by Shanks (from STRONG) and his new wife. There Addy learns she can make different decisions than those dictated by her own racist family. Vivid scenes involving the Ku Klux Klan, a school burning and attempted lynching...

Published by Thriftbooks.com User , 14 years ago
Addy is abandoned by her mother when she is only 12, yet she has her head on straight enough to muddy through the forces of good and evil which close in around her. Not unlike Scout in "To Kill a Mockingbird," Addy rises to the truth when she needs to and acts with courage and determination, with a maturity that most adults around her fail to exhibit. Torn between her family's bad reputation and her own need for independence, Addy shows that being abandoned by your family can be a positive when the right surrogate parents are at hand. Great post-Civil War snapshot of the Deep South, complete with white sheets and very mean men. Suitable for middle- or high schoolers and an easy airplane read for me.

Published by Thriftbooks.com User , 14 years ago
I have read "How I Found the Strong" by Ms. McMullan and enjoyed this book even more. My grandchildren loved it. The author's writing skills get better and better. Write one for us older readers!

A beautiful story of survival and growth

Published by Thriftbooks.com User , 14 years ago
Margaret McMullan's WHEN I CROSSED NO-BOB is a beautiful, lyrical and uplifting novel for young readers (though adults will surely enjoy it, too). The story begins several years after the end of the novel's prequel, HOW I FOUND THE STRONG, at Shanks' (Frank Russell) wedding where twelve-year old Addy O'Donnell (of the famous and feared O'Donnell clan) is abandoned by her mother. Frank and his new bride take Addy in and Addy does everything she can to fit in with her new family. But Addy's past, in the form of her father, comes back to claim her and bring her back into the fold. Addy must conquer her fears and search deep into her soul to find the courage to do the right thing. It's a terrific story.
Trustpilot
Copyright © 2022 Thriftbooks.com Terms of Use | Privacy Policy | Do Not Sell My Personal Information | Accessibility Statement
ThriftBooks® and the ThriftBooks® logo are registered trademarks of Thrift Books Global, LLC