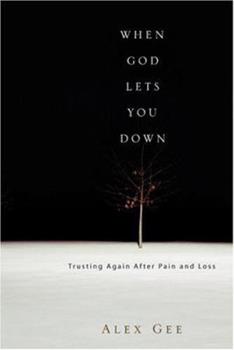 When God Lets You Down: Trusting Again After Pain and Loss

"Emergency operator. May I help you?""Yes, my name is Alex Gee, my wife is nineteen weeks pregnant and I think her water just broke! This is her second pregnancy, and . . . we lost our first baby just like this . . .""Sir? Hello? Sir? Try to stay calm. Who is your wife's OB/GYN?""It's Dr. Koller! Uh . . . My wife is losing more fluid . . . Hurry!"Oh God, this isn't happening again. I can't handle another loss like this. Let this be a dream! Please...

Living the Word of God

Published by Thriftbooks.com User , 13 years ago
This is an excellent book given to me and I highly recommend it. It is a quick read of a compact 128 pages but nonetheless very detailed. Pastor Gee does an excellent job of communicating bible truths that he has had to endure in the "dark night of the soul". The old saying "practice what you preach" takes on a whole new meaning in his second publication. He bares his soul in this work. The devestation of losing two daughters at birth is nothing short heart wrenching. Pastor Gee gives his testimony of how God's grace is sufficient for us. He provides numerous biblical examples that explain that trails and tribulation are a part of the walk of true followers of Christ. These life experiences inevitably build character in God's way. A lack of immediate clear understanding of what God is doing in a particular season of our lives is also a part of the Christian life. He is correct to refute with biblical examples contemporary popular belief espoused in some theological circles that hold fast to the doctrine that big faith can be utilized as a means to a perfect life. On page 26, it says "......hardship that builds character is as much the work of God as are His great public exploits." This book is also a biblical expose' on why bad things happen to good people. However, he explains that we must never forget the fact that God is very near in our times of trouble and he does ultimately bless His children. I highly recommend this book to anyone who has had to endure hardship such as death, divorce, illness or those who seek to understand God's sovereignty. Alexander Lewis, Th.M Professor of Apologetics Seattle, Washington

Published by Thriftbooks.com User , 15 years ago
Alex Gee has delivered a gem with this book on sorrow and loss. It's basically his story of the loss of two daughters - and the near loss of a third - at birth. I've never read such emotional prose, yet there is never a hint of wallowing here. This is simply fine prose from one of America's finest preachers, and the gospel message rings through and through. Tim Tyson (author of Blood Done Sign My Name) said in an interview: = There is a temptation among Christians to decide, in advance of actually examining the evidence on the ground, that history was redemptive and faith-driven and somehow theologically focused. ... I am a pretty good nonsense detector, having grown up among people whom I admire for their audacious and unjustified hope. = Alex Gee would be one of those people. When God Lets You Down is about audacious and unjustified hope. It is a manly approach to the grit of life. The last chapter belongs in any anthology of Christian writing. Any editors out there reading this? It's a letter to his two girls who died, and Gee shows his most courageous side, when he actually apologizes to them. This is the deep stuff of the soul, and life-giving like few other texts I've ever read.
Copyright © 2022 Thriftbooks.com Terms of Use | Privacy Policy | Do Not Sell My Personal Information | Accessibility Statement
ThriftBooks® and the ThriftBooks® logo are registered trademarks of Thrift Books Global, LLC