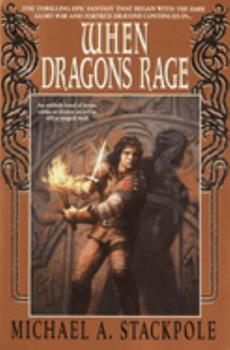 When Dragons Rage: Book Two of the Dragoncrown War Cycle

Michael A. Stackpole, New York Times bestselling author and master of epic fantasy, continues his unforgettable chronicle of a world divided by war, betrayal, desire, and two rival magicks. . . . As her merciless armies sweep from the north, the tyrant Chytrine pursues her quest to become empress of the world in a brutal campaign of unspeakable bloodshed and unholy sorcery. While cities and kingdoms topple, her agents, both living and dead, search...

Published by Thriftbooks.com User , 17 years ago
"When Dragons Rage" is the second novel in The DragonCrown War Cycle series approximately one generation following "The Dark Glory War" prelude novel. It is an impressive book filled with creative battles, detailed descriptions, and interesting characters. The progressions of Kerrigan and Wilburforce throughout the book are remarkable, especially the combat improvements by the two youngsters. The camaraderie between Resolute and Kedyn's Crow isn't as dominate as in the prior volume but is complimented with a romantic relationship delivering less fighting, which I find slightly disappointing. Given the audacious origin of General Androgans, he is one of my favorite characters, implementing impressive strategies and tactics. Characters and countries overwhelmed me by the end of the novel and a glossary would have been worthwhile along with a more detailed map of the significant terrains. I highly recommend this series to any fan of the fantasy genre and look forward to reading the final novel. Thank you.

Published by Thriftbooks.com User , 18 years ago
Michael Stackpole has done a splendid job of not writing a filler in a trilogy. This book has stunning plot twists, great action when needed, and breaks for breathing and thought when needed. The story moves along realistically yet with all the elements you'd expect from a good fantasy epic. Stackpole has also devoted energy to developing the characters further despite all the action going on. Well done.

And the followup makes the grade

Published by Thriftbooks.com User , 18 years ago
This series is fantastic. Stackpole's characters are, as always, human (even those that aren't biologically). This book informs readers of what happened after DGW, specifically related to Crow and to Leigh Norrington. Will's character shift is welcome; Alexia becomes a character with more depth and her love interest (while not surprising) is sincere. Kerrigan.... well let's just say that Stackpole does a masterful job of showing his power and naivete all in the same scenes. Again, very consistent character work.*spoilers below*As has been noted, there are very few all out melee battles in this book. The main characters have plausible political and social problems as well as battle strategies to devise. The hit and fade attacks by Resolute, Crow, and Will are nicely done as added action scenes and further story development. Stackpole's plotline flows naturally and logically from point to point; nothing in this novel seems contrived or forced; the end of the book is well thought out, although there's an easy clause out of Will's death. I'm torn between wanting Stackpole to bring such an intereseting character back with said clause or leave him dead because its use might cheapen the plot. But besides that, it's nice to know that Rym Ramoch and Bok are more than they seem.This book is consistenly engaging (to be read: will keep you up late to finish it) and is highly recommended. But read Dark Glory War and Fortress Draconis first so you understand what you're reading.

Yeah, it's really THAT good.

Published by Thriftbooks.com User , 18 years ago
First off, the disclaimer: If you're biased about Michael's non-Star Wars or non-Battletech books, don't branch out with this one. It picks up in the middle of a three book (so far) series and you'd miss out on a lot.Onwards. When Dragons Rage does a fantastic job of not only continuing an intense, high fantasy saga, but you get to see characters from Fortress Draconis grow, develop and learn. Nobody really hogs the limelight, with the possible exception of Will, but as THE Norrington, what else would one expect? (What'd I say? Read the first book first)So if you don't like story lines where many things happen at once, you might want to pass on this. There's a lot happening, even though Michael does a magnificent job of working us back into a scene we left behind a chapter or two ago.The action picks up in this book, taking us from battle to battle, confrontation to mystery and back into battle, very smoothly. Nothing feels forced, and the characterizations are very well done. Nobody speaks with somebody else's voice.Final note: By the end of the book, I was reading and turning pages as quickly as I could, anxious to find out what happened next... and dreading that final page. When I got to it... well, Michael warned us with his Author's Bio. "...has gone into hiding for fear of being lynched because of the ending of this book." I don't blame him a bit. "Cliffhanger" is a good word for it.When Dragons Rage is definitely a page-turner, and the characters are all compelling. The writing style is solid and the plot line... overwhelming at times. Truly a grand saga, and well worth the read.

Published by Thriftbooks.com User , 19 years ago
What a great 2nd book in a series. Puts many new facets of the story into play and solves a few questions. A bit choppy in the writing style as it switches main characters in each chapter and you have to read through two or three chapters to get back to the story line you were interested in. But that is mostly how Stackpole writes. If you liked his style before it will not bother you too much.
Copyright © 2022 Thriftbooks.com Terms of Use | Privacy Policy | Do Not Sell My Personal Information | Accessibility Statement
ThriftBooks® and the ThriftBooks® logo are registered trademarks of Thrift Books Global, LLC