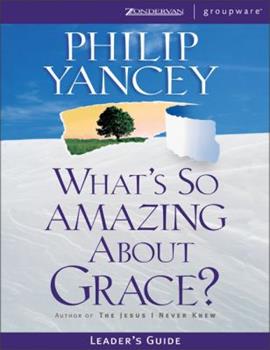 Experience the Impact of GraceIt's one thing to talk about grace; it's another to taste its power. What's So Amazing About Grace? Groupware takes you and your study group for interactive, gut-level encounters with radical, life-changing grace. Through candid video interviews, Philip Yancey integrates true-life faces and experiences with 10 powerful sessions that will rock your preconceptions, get you thinking and talking, and help you discover together...

The best Christian book I ever read

Published by Thriftbooks.com User , 18 years ago
I was attracted to this book by the long list of recommendation on the back cover and the stamp that said it's the 1996 book of the year by a publisher association. As a Chinese born and living in Hong Kong, I took them as sheer American style marketing gimmick. The fact is, I had been 100% wrong. I had read tens if not over a hundred Christian books and this is by far the best I ever picked. It had corrected many of my misunderstandings or ignorance about Jesus, His Grace and His teachings. Say, I can disagree with homosexuality, adultery, communism but I still have to love patients, victims and sinners as Jesus did. Non violent protest can still mean a lot as what Martin Luther King did. Legalism and perfectionism can do more harm than good in evangelistic sense coz humans tend to break rules innately, and rule-breaking will haunt somebody from church and God, and that of one hundred men one read the Bible and the ninty nine read Christians etc etc.Some reviewers criticized that the author had tried to preach his own secular view instead of Jesus's teachings, to replace God's high grace with low human love and care, to win the approval of men at the expense of God's holiness blah blah blah. I assure you that all of these criticisms were wrong, and I sincerely hope that you can read the book through and judge yourself. You wont be disappointed and you may even be moved into tears on some chapters. Below please find some copy and paste for your reference. Hope you like them.Nowadays legalism has changed its focus. In a thoroughly secular culture, the church is more likely to show ungrace through a spirit of moral superiority or a fierce attitude toward opponents in the culture wars. The church also communicates ungrace through its lack of unity. Mark Twain used to say he put a dog and a cat in a cage together ...a bird, pig and goat. They, too, got along fine after a few adjustments. Then he put in a Baptist, Presbyterian, and Catholics; soon there was not a living thing left. Pg 33In one of his last acts before death, Jesus forgave a thief dangling on a cross, knowing full well the theif had converted out of plain fear. That theif would never study the Bibile, never attend synagogue or church, and never make amends to all those he had wronged. He simply said "Jesus, remember me," and Jesus promised, "Today you will be with me in paradise." It was another reminder that grace does not depend on what we have done for God but rather what God has done for us. Pg 54Paul, the chief of sinners, he once called himself - knew beyond doubt that God loves people because who God is, not because of who we are. Pg67Jesus declared that we should have one distinguishing mark: not political correctness or moral superiority, but love. Paul added that without love nothing will do - no miracle of faith, no theological brilliance, no flaming personal sacrifice - will avail.

Published by Thriftbooks.com User , 22 years ago
I have faithfully been part of a church and studying the bible for the last 20 years. I have a relationship with the Holy Spirit and have visited many churches, denominations, and religions. Though many churches have preached the gospel and spoke of God's grace, none have compared or grasped the understanding that Philip Yancey has seemed to capture in the book titled, "What's So Amazing About Grace?" It will not only make you truly understand God's Grace, but it will help to heal you from much pain and guilt, you yourself, other poeple, or even churches have placed on you. Too many churches preach the hard law and forget the whole point of the gospel...God's amazing, underserved grace! Oh, how refreshing and enlightening! Moses brought the law, Jesus brought truth and grace.

What's So Amazing About This Book

Published by Thriftbooks.com User , 22 years ago
Book of the Year winner, this is the best book, outside of the Bible, that I have ever read. Period. Here Yancey presents a radical picture of what Grace, the last good word, really is. As usual, his writing style is very down to earth, real, empathetic, and insightful. How do we deal with the idea of Grace combined with things like Nazi Germany, the KKK, and Columbine high school? Can we reconcile the two in our minds? We must, if we are to view Grace as it is truely presented in the Bible. Grace is scandelous. But scandelous Grace is what God demands of His church. Real Grace forgives the unforgiveable, loves the unloveable, and reaches even to the undesirable. And when true Grace is emparted, the world sees Christ, for Christ's Grace given to us is just as amazing. Yancey's words here are sometimes shocking, as it is difficult for the rational human mind to empart Grace when we automatically demand justice. But none the less, his words are Biblically true and so the challenge is for the church to apply these lessons. Read this book. Open your heart. Accept the Grace that God emparts to you and then empart Grace to those in your life. Learning to empart Grace, and in the process destroying the cycle of un-grace, will utterly change your world. There is no other book that I can recommend more to a Christian searching to be and love like Jesus. Five stars.

Everyone Needs to Read This

Published by Thriftbooks.com User , 22 years ago
This could be one of the best "faith" books I have ever read. In a day and age where platitudes reign in sermons, Yancey is able to drill down into the core purpose of Christianity. His perspective on grace is refreshing, eye opening, and portrayed in way that entices you to want to learn more. One of my favorite excerpts which is the real premise of the book: Mark Twain used to talk about people who were "good in the worst sense of the word," a phrase that, for many, captures the reputation of Christians today. Recently, I have been asking a qustion of strangers when I strike up a conversation. "When I say the words 'evangelical Christian' what comes to mind?" In reply, mostly I hear political descriptions: of strident pro-life activists, or gay-rights opponents, or proposals for censoring the Internet. Not once - not once - have I heard a description redolent of grace. Apparently this is not the aroma Christians give off in the world....Yet somehow throughout history the church has managed to gain a reputation for its ungrace. As a little English girl prayer, "O God, make the bad people good and the good people nice."Great book and a must read.

How Sweet the Sound

Published by Thriftbooks.com User , 22 years ago
I have found myself telling people stories and quotes from this book so often that I figured it was time for me to throw my two cents out there. Philip Yancey has almost surpassed C.S. Lewis as the most insightful Christian writer I have read. And while as a philosopher I greatly appreciate the idea-based insight that Lewis provides, Yancey's works seem to offer more practical advice and help to answer the question: "How then should we live?" After reading this book, I can't see Grace anymore as just one of those things that's meant to make us feel warm and fuzzy inside. I mean, Yancey's depictions often do bring those warm and fuzzy feelings, but more than that, it shows the unquestionable POWER and STRENGTH that is contained within grace. It's not just a nice, sweet little virtue that we do because it's easy. This book showed me that Grace is life changing and necessary. And when I read the part where the civil rights worker looks out the window and through laughter and tears first understands what grace really is, that was the moment when I truly began to understand what grace really is. And it truly is amazing.
Trustpilot
Copyright © 2022 Thriftbooks.com Terms of Use | Privacy Policy | Do Not Sell or Share My Personal Information | Accessibility Statement
ThriftBooks® and the ThriftBooks® logo are registered trademarks of Thrift Books Global, LLC