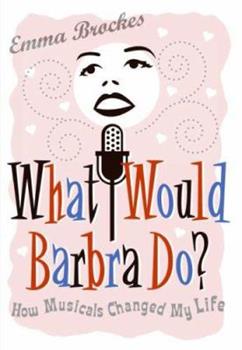 What Would Barbra Do?: How Musicals Changed My Life

Emma Brockes didn't always love musicals. In fact, she hated them. One of her earliest (and most painful) memories is of her mother singing "The Hills Are Alive" while young Emma crossed the street to go to her babysitting gig. According to her mother, the music would keep muggers at bay. According to Emma, it warded off friends, a social life, and any chance of being normal. As she grew older, however, these same songs continued to resonate in her...

Fun For Musical Theater Geeks(or might make you one;-)

Published by Thriftbooks.com User , 13 years ago
In Emma Brockes highly involving book about Musical Theater and the people who love it,Barbra Streisand is actually just a relatively small part of what this book is about so if your'e expecting all Babs,you won't get it here,though she does devote a chapter to her & refers to her enough to satisfy most fans(Her Lentil/Yentl night is a somewhat regular happening at her London flat and might even inspire fans to try it themselves) Mostly,though, this book is about why Musicals affect so many people, and why people tend to either love or hate them. She discusses why some shows work(Mostly ones from Musical Theater's so-called "Golden Age"(that is,shows that premired pre-1971) so don't expect Brockes to wax poetic about most of Sir(or is it Lord)Andrew Lloyd Webber's output. She also writes about how Musicals brought her closer to her mother as she grew up and really began to appreciate them.(something I could relate to) Her writing is sharp,witty & while you might not agree with her at times,you respect her opinion,as she's definitely done her homework. Ironically though,for someone who claims not to like "The Sound Of Music" she does spend quite alot of the book discussing it & even describes a mid-winter tour of Salzburg devoted entirely to the movie version;perhaps it's a love-hate thing for Brockes,as her mother would serenade her with the title song when she crossed the street at night to go babysitting when she was growing up in the London Suburbs. My review; I really enjoyed this book and look forward to her follow-up(or should I say sequel?)

What would Barbra do?

Published by Thriftbooks.com User , 13 years ago
After finishing this delightful read, I was still wondering what would Barbra do? I have a feeling I would know what Julie Andrews would do or even Cher, but there really isn't enough about Barbra for anyone who thought by reading this book you would receive insights into Ms. Streisand's musical performances on film, stage, tv and recordings. In spite of that, I found it a delightful read. The kind of book that makes you want to have a movie night with the author and her friend. Save a space for me at your next Yentl/Lentil night.

A Great Defense for Musicals

Published by Thriftbooks.com User , 13 years ago
I quote this book...constantly. Not only is Emma Brockes a great and humorous storyteller, she is also quite the philosopher and film theorist. The title is a bit misleading-- Barbra is not the main focus. However, this book is worth the read for Barbra fans and non-fans (foes?) alike. Recommended.

Published by Thriftbooks.com User , 13 years ago
Emma Brockes was raised in England by a mom who would break into show tunes at the drop of a hat. Growing up in the age of DVDs, Emma and her girlfriends were free to to watch their favorite musicals ad infinitum , and boy, did they ever (imagine seeing Mary Poppins 150 times). Now she describes the influence that the shows and songs have had on certain aspects of her life. Wry and witty, Brockes deconstructs the genre, analyzing plots, messages, the good (five of Rodgers and Hammerstein's), the bad (Seven Brides for Seven Brothers), and the worst of all time (Xanadu). The book is sprinkled heavily with comic incidents and observations, a tongue-in-cheek yet authoritative survey of the history of musicals in all their spectacular, impossible glory. And yes, they have influenced the development of the American "character", in both senses of the word. Fun and original.

Why Can't Life Be an Extravagant Movie Musical With Crisis-Solving Production Numbers?

Published by Thriftbooks.com User , 14 years ago
Having just seen the 1957 kinescope of Rodgers and Hammerstein's Cinderella starring a 21-year-old Julie Andrews, I knew I would be a prime candidate to read Emma Brockes' sharply written memoir about her love-hate relationship with musicals. In a tone alternately flippant and worshipful, the author, a feature writer for the Guardian, examines the tenuous relationship between musicals and real life, an awkward connection that blurs the line between optimism and fantasy under the guise of nostalgia. Brockes recognizes the key role that a viewer's attitude plays in enjoying a musical because one either has to be of a certain age to appreciate the musical form, or been deigned to carry forth the trivial knowledge that is utterly necessary with speaking fluently about the genre. Regardless of which category in which one falls, it means obsessively collecting original cast albums - on vinyl, of course - and collector's edition DVD box sets. Only in her early thirties, the author clearly falls into the torch-passing category inheriting her passion from a Mermanesque mother who in the evenings, would sing show tunes at the front gate in order to sing Emma home from babysitting at the neighbors' house. The intent was to thwart the tawdry intentions of potential muggers, but the net effect was more insinuating as the songs would invade the Brockes' memory by osmosis. Lyrics from classic Hollywood musicals land so securely in her subconscious that reciting them from start to finish was a breeze. Most of the musicals she prefers are the optimistic confections and extravaganzas from the 1950's and 1960's, full of over-the-top emotionalism and married-in-a-minute romanticism. Other than the catchy songs, the primary entertainment value came from the fact that the creators and performers treated the plotlines with dead seriousness. What those composers, lyricists and librettists knew is that a musical only works when it doesn't think of itself as a musical. Characters burst into song not because they're aware of performing, but because for them, singing and dancing are as natural as laughing or crying. The moral of these musicals is that no problem in life is so large that it cannot be solved by a production number. From the title, it's clear that Barbra Streisand plays an influential role in the contrived nature of the genre. In fact, Brockes devotes an entire chapter to Streisand's Talmudic musical fable, 1983's Yentl. Julie Andrews is another idol frequently mentioned, and one of the author's most amusing anecdotes is her star-struck encounter with the star. Idolatry, however, does not equate to unconditional worship, as she does not hesitate in deconstructing their movies. Even a venerable classic like Mary Poppins, which Brockes saw with a friend twice a week for three years, is observed as dialogue-heavy with "a combination of long strings of incomprehensible words with short, sharp ones". She rightfully ridicules a lot of modern musicals, in particula
Trustpilot
Copyright © 2022 Thriftbooks.com Terms of Use | Privacy Policy | Do Not Sell My Personal Information | Cookie Preferences | Accessibility Statement
ThriftBooks® and the ThriftBooks® logo are registered trademarks of Thrift Books Global, LLC