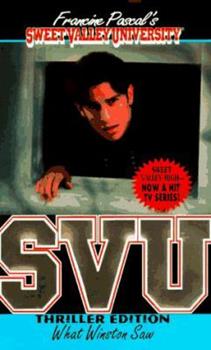 Winston Egbert wishes he'd never been tempted by sexy Amanda Franklin. She was nothing more than a one-night stand, and a stupid mistake. He desperately wants to forget about her. But Amanda saw something horrible from the bedroom window that night--something she can't get out of her mind.

What DID Winston See???

Published by Thriftbooks.com User , 19 years ago
I have read this novel a long time ago so I cannot remember it very well.I know Winston was a witness to either a murder or a clue to a murder.I'd recommend this to anyone as the Sweet Valley Uni thrillers are very engrossing.

What color ARE Denise's eyes?

Published by Thriftbooks.com User , 20 years ago
Winston gets a part-timer working in the Dean's office, still dating Denise, who is described in this book as having blue eyes. She had "almost-black" eyes in SVU #1, another booboo Pascal! Anyway, the Dean's sexy-but-promiscuous wife, Amanda, flirts with Winston and then visits him one night in his dorm room...he partially declines her, but she witnesses a killer attacking someone outside his window! Winston tries to bring the attack to light himself, but is discredited in court...and so brings the truth about their "affair" into the open. But the killer has a pattern of blonde victims (due to adolescent rejection), and is it already too late to save someone close to them? Denise & Winston team up to go undercover again in order to solve this one...very suspenseful!

Published by Thriftbooks.com User , 20 years ago
ok since Winston isn't such a big charactor in SVU as he was in SVH ,but don't let this put u of .Even though the twins don't feature much it is still a great book i won't tell u all the plot,i would try to rent this out of your libary or borrow it of a mate if you can befor buying as some readers may not like the fact that it is diffrent from the others and does not featuer the usual charactors .Enjoy!

Published by Thriftbooks.com User , 24 years ago
I thought this book was very good, judging by the title. My friend had told me about it before, so I was interested in reading it. I found it to be a book that I couldn't put down, afraid something very exciting would happen the second I did. Overall--very good book-2 thumbs up!:
Copyright © 2020 Thriftbooks.com Terms of Use | Privacy Policy | Do Not Sell My Personal Information | Accessibility Statement
ThriftBooks® and the ThriftBooks® logo are registered trademarks of Thrift Books Global, LLC