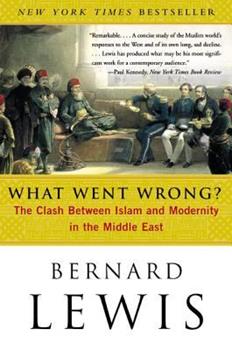 What Went Wrong?: The Clash Between Islam and Modernity in the Middle East

For centuries, the world of Islam was in the forefront of human achievement -- the foremost military and economic power in the world, the leader in the arts and sciences of civilization. Christian Europe was seen as an outer darkness of barbarism and unbelief from which there was nothing to learn or to fear. And then everything changed. The West won victory after victory, first on the battlefield and then in the marketplace. In this elegantly written...

Published by Thriftbooks.com User , 15 years ago
Certainly "What went wrong?" is a provocative question that many will find unpalatable from the start. However, it is the right question, and Lewis answers the question superbly. To deny that that the current state of Islam and the Islamic world is not in dire decay is simply agenda-driven or politically-correct blindness. Oppression of women and ethnic minorities is rampant -- women are not allowed to own property, drive cars, appear in public without the veil, and instead undergo clitorectomies, honor killings, and enslavement. Similarly, one can look at Muslim treatment of other Muslims, for starters, such as Saddam's gassing of the kurds, or the Iran-Iraq war, or the current Sunni-Shia violence in Iraq. Lewis traces the insularity of Islam after its heyday during the middle ages, when it rejected or was slow to adopt "infidel" technologies, such as modern weaponry and the printing press. At the same time, Islamic societies did import some of the poorer offerings of the Western World, such as fascism and centralization of state power (brought on by bureaucracy, record keeping, and so on). These led to the Islamofascist dictatorships -- secular strongmen bolstered by an ideology, which we see in Egypt or Syria, or fundamentalist ones such as Iran, and would be examples, such as the resurrection of the caliphate that Bin Ladin seeks. A sad byproduct of this centralization was the elimination of intermediate power holders in the Islamic societies, which acted as a constraint on the capriciousness of central authorities. The loss of Halifa, the "rightful" empire of Islam, has fueled resentment as Muslims confuse Westernization with Modernity, or resent the successes of modernity, which have painfully few roots in the Islamic world. Note that the work addresses what went wrong with Islam -- including the Middle East but not restricting itself to it. It would be disingenous, however, to assert that the Middle East is not the wellspring of Islam and that Muslims living in "Dar al Harb" are not strongly connected to the Hijaz -- the holy Arabian peninsula. It is similarly specious, as some reviewers contend, that problems in Islam are not profoundly influenced by historical antecedents in the Middle East. Lewis as a writer is a master of beautful prose -- modest and pithy. He is able to convey complex information to popular audiences without sacrificing the integrity of his scholarship. "What went wrong?" is both the right question and the right book -- essential reading for all concerned about the rather obvious "clash of civilizations" that we see today.

Going where few others dare

Published by Thriftbooks.com User , 19 years ago
It is difficult not to ask this question when one sees that during the Middle Ages Islamic civilisation was far more advanced than Western Christian civilization in most areas, including science. Yet today, the combined non-petrol exports of all Arab countries amount to less than those of Finland, and in Spain each year more books are translated than the Arab world has during the last 1000 years. Lewis clearly belongs to the school, which seeks to explain the fortune or misfortune of civilisations through their cultures, rather than geography or political events. There have been many studies in recent times trying to explain the backwardness of Arab countries in economical and other matters (see e.g. Arab World Competitiveness Report 2002-2002, Arab Human Development report 2002). All of these stop at secondary explanations, such as the discrimination of women, lack of freedom etc..... Lewis traces these back to their roots : the culture of IslamLewis paints a picture of an Ottoman world, the most powerful entity in and a proxy for the Islam world, not interested in learning much from the infidel west, except in military matters (to averts defeats). Cultural Exchanges between the West and the Ottoman world had been a one-way street for centuries, the West absorbing what was useful, and the Ottoman empire too aware of its superiority to contemplate learning from infidels. This superiority in part was due to Islam's view of Christianity as a precursor of Islam, i.e. less perfect. Still, military defeats in the 17th and 18th century forced the Ottomans to ask themselves what caused their decline and what was the solution. In the 19th century Ottoman rulers undertook a number of modernisations, which they hoped would strengthen the empire. This led to less freedom and more autocracy in the empire. Lewis points out that, whereas Europeans viewed freedom as the opposite of tyranny, for Ottomans the opposite of tyranny was justice, i.e. the ruler was there by right and that he ruled according to God's law. Little surprise that most experiments with democracy petered out soon. Lewis also notes a fundamental difference between Western and Middle Eastern economic approaches today: in the West one makes money to buy power and influence, in the Middle East one seizes power to make money. In the chapter on social and cultural barriers, Lewis identifies and analyses three crucial differences, which have played a role: (the discrimination of) women, science and music. Lewis points out that, whereas Western powers imposed the abolition of slavery on the world, including Islam, little or nothing was done to promote the rights of women in the Islam world. Lewis does not attempt to elaborate the impact in economical or other terms of the discrimination of women in the Middle East. As to science, the hostility in Islam to science in later centuries is indeed all the more remarkable given the role Islam has played early on in developing and transmitting science from

Small In Size But Profoundly Insightful And Informative

Published by Thriftbooks.com User , 19 years ago
I bought this book after the horrific events of September 11 caused me to wonder how any faith, no matter how militant, could justify the murder of innocents. I am a retired lawyer and, when I had the time, pursued the study of history as a hobby. I do that a lot now. I understand this country's strengths and weaknesses, and found it beyond belief that we could be hated with such intensity, and that any religion or political philosophy could endorse such obscene behavior. Professor Lewis answers this question with his recognized expert understanding of a failed civilization. While Europe foundered into the dark ages following the fall of Rome, education, much of it from the far east, flourished in the Muslim world. But Western Civilization, largely as a result of the religious wars of the 16th and 17th centuries, secularized government. The Muslim world has not done so to this very day, nor has it pursued scientific inquiry, music or literature, as was the case in the West. Lewis points out that other than seeking to learn about the West's military techniques after suffering a chain of defeats, science,technology, music and the arts were not important to a people who centered their lives on a medieval, militant religion. One of the first collisions between Islamic thought and that of the West arose from the latter's elimination of the slave trade. Slavery, to Islamic ways, was approved by Allah, and thus was not an evil practice.It was a troubling collision of ideas to the East, which has not been fully resolved to date. Lewis helps us to understand that this same antiquated thinking collides with Western enlightenment with respect to the status of women. It is in the area of personal rights and status that brings this failed belief system into profound conflict with Westernism. This is a powerful little book. Nomatter how much one may enjoy certain cultural aspects of the Middle East, the tension and hostility will not be eliminated easily. When one combines the frustration of a failed civilization seeking to return to a glory that has not existed for centuries, a religion that is based on and immured in medieval philosophy, and a substantial number of people who believe that any action against the "infidel" (that's us, folks), no matter how horrific, is morally good, there results a recipe for disaster. Thinking Americans should read and re-read this book. Understanding promotes good decision making, and as our nation moves further into its war on terrorism, our society has a real need for thinking Americans, both as decision makers, and as voters who elect them.

Published by Thriftbooks.com User , 20 years ago
Here's a clue to the current situation: anybody who uses the word "Orientalist" to condemn Bernard Lewis is an example of what he's talking about, since they are 1) using the term as a slur to halt debate, and 2) looking to put the blame somewhere else than on Islam. These are in fact the two theses he explores, eruditely and with considerable sympathy: how theocracy made Islam rigid and resistant to progress at exactly the moment that rigid and theocratic Europe was opening up; and two, why the Islamic world still can't accept that this has happened and that it has anything to gain from the by-definition-inferior Christian world. That Lewis is no mere Fox News Channel Arab-basher is evident from the considerable space he devotes to subjects such as the rights of women (in which Islam in many ways was more advanced than the West until quite recently), or official toleration toward non-Muslims which often shaded over into actual favoritism in certain proscribed areas. And even his discussions of topics such as slavery (which, it is worth remembering, survived in Saudi Arabia until the 1960s) or the utter lack of separation of church and state in Islam, which you do not expect any western historian to be terribly sympathetic to, nevertheless present historical circumstances thoughtfully and without judgment.This is not a completely easy book for someone with a limited knowledge of Arab and Ottoman historical figures, and if you're mainly interested in a viewpoint on the current situation, you might be best starting off with the Conclusion (which also appeared in The Atlantic) and working backward. However, there's no question that Lewis will greatly improve your understanding of why the Islamic world is the way it is-- that is, if you have that trait commonly mistaken as a purely Western one, an open mind.

Published by Thriftbooks.com User , 20 years ago
When I saw Bernard Lewis, a Professor Emeritus at Princeton University, in an interview on television, I was impressed with his depth of knowledge of Middle Eastern history, culture, and the Islamic religion. This book was written before September 11th, and the predominant thought I had reading this superbly written analysis of what events and developments had led up to the decline of Middle Eastern culture was: If we had only known... Bernard Lewis, at 85 years of age, has become the most highly sought after authority on the Middle East as a result of September 11th. The book examines issues Lewis deems central to the decline of the Middle East as a world player, and leads the reader into drawing his own conclusions based on a more thorough understanding of the underlying problems. This book is a MUST READ for anyone wanting to know the cultural and historical facts which undoubtedly played a part in the terrible tragedy that resulted on 9/11.
Trustpilot
Copyright © 2022 Thriftbooks.com Terms of Use | Privacy Policy | Do Not Sell My Personal Information | Accessibility Statement
ThriftBooks® and the ThriftBooks® logo are registered trademarks of Thrift Books Global, LLC