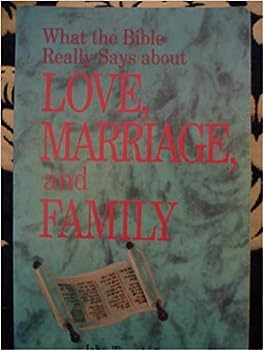 What the Bible Really Says About Love, Marriage, and Family

Family values were different in biblical times. Wives were property, divorce was for men only, and Jesus told his disciples to abandon their families and follow him. In light of the vast differences... This description may be from another edition of this product.

Published by Thriftbooks.com User , 18 years ago
His first book, What Paul Really Said About Women, changed my life, so when I heard he had written another, I was eager to check it out. Although not as redemptive and indwelling as his first, it's still a 5-star read. As the title suggests, here Bristow takes a broader look at gender dynamics, from the Old and New Testament. This includes investigating sex, treatment and male thoughts on women, different models of marriage and Biblical treatment of divorce, and Jesus' thoughts on family. Throughout the text Bristow seeks to reveal what the author was originally saying, and what the audience was originally hearing, to pursue eisogesis and avoid exegesis. He looks for what is surprising and what may be even shocking for Christians and himself to read, arguing that the Bible is usually a counter-cultural work, and the original books were written because they needed to be written- i.e. the people they were written for did not inherently believe what the text said; there was a need for the text. So Bristow discusses the Biblical model of marriage. Which of course is not one model, but at least seven, overlapping models. And if we want a Biblical marriage, it could easily mean a first date involving a servant going off to offer camels for the woman or unveiling the man's genitalia on a threshing floor. After that, it might mean marrying one's half-sister, as Abraham did, marrying because the guy is wealthy and the woman has a big dowry, having a few wives, plus some concubines, and the man having absolute authority over the woman. All of these are models of marriage in the Old Testament, that are not actually denigrated in the text, but rather accepted as part of the culture. But they're not praised or encouraged by the texts either. There are only two models that God himself put in place- one that follows the curse, and the other that existed before the fall. And amazingly, while most American churches would not actually advocate following patriarchal law where the husband had absolute authority over his wife and could even abrogate her vows, most churches argue for a model of marriage based on the curse. It is as if Christ did not come, and no grace is present, and the curse continues to reign- at least within marriage. Therefore Bristow describes the hope we can have for peace in a marriage, by following the guidelines of Genesis 2 before the fall, and those of Jesus in his treatment of women. Bristow usually looks at culture, but also at the original Greek and Hebrew, to get at what the text originally said, before the misogynism of early church fathers cast the texts in a different light. So the word for "one flesh" denotes the entire being- and therefore, a healthy marriage should be pursuing the idea of becoming one being- although not one spirit. Therefore the feelings of the other become as one's own feelings, but without the couple having the same personality. And since they are one flesh, it makes no sense to decide who i
Trustpilot
Copyright © 2022 Thriftbooks.com Terms of Use | Privacy Policy | Do Not Sell My Personal Information | Accessibility Statement
ThriftBooks® and the ThriftBooks® logo are registered trademarks of Thrift Books Global, LLC