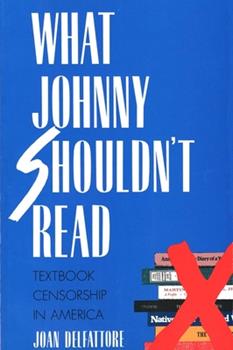 In this lucid, disturbing, and provocative book, Joan Delfattore offers a behind-the-scenes view of the ways in which special-interest groups influence the content of textbooks used in public and private schools throughout the country. Efforts to censor elementary and high school textbooks have proliferated in the past decade. Most challenges have come from ultraconservative activists who oppose evolution, racial and ethnic equality, nontraditional...

Published by Thriftbooks.com User , 14 years ago
I'm delighted to discover that this excellent book is still in print. It really boggles the mind how there are actually people like Vicki Frost and Mel and Norma Gabler in America, people who want to dictate to everyone what kinds of textbooks should be used in public schools (rather like what the right-wing fundamentalist Dove Foundation does with movies). Because they don't go along with their view of the world, America, history, religion, politics, or whatever, it needs to be removed, and it's so horrible that impressionable schoolchildren are learning about things like the Great Depression, other religions, kindness to animals, telepathy in a science-fiction story, and feminism. The stories in this book are absolutely chilling. The book begins with the story of the fundamentalist Frost family in Tennessee. Vicki, the mother, was horrified when her 8th grade daughter Jennifer (identified as Rebecca in the book) asked her for help with a homework assignment based on a story she was reading in English class, "A Visit to Mars." Young Jennifer was thrown for a loop because the story mentioned invisible Martians with telepathic powers. Mrs. Frost was even more horrified, and found out that in addition to telepathic powers (which her family considered to be demonic), Jennifer's textbook also contained stories featuring things such as anti-hunting themes, feminism, kindness to animals, and what she considered witchcraft and demonic powers. The Frosts, their minister, and some of their neighbors wanted the school board to remove the "objectionable" books and replace them with new books, but after the school board refused, the parents took matters into their own hands. They would come into the school to give their kids reading lessons, removing them from the classrooms, making a big public show over how they didn't want them inculcated with the evil filth in those naughty textbooks. The reading teachers complained to the principal, who said if they didn't stop, then he would have them reported and prosecuted. The children were then removed from the school, and the case went to court. It got so ridiculous that the judge finally announced that trying to define religion for the Frosts and their cohorts was like trying to nail jello to the wall, since every little thing was deemed un-Christian to them. One has to love the Frosts' objections to a story with an anti-hunting theme, since they felt that kindness to animals would bring about the end of the world by creating global unity, a universal language, a one-world government, the end of capitalism, world peace, and the rise of the Antichrist. Another scary story in this book concerns the censorship activities of Mel and Norma Gabler in Texas, another dangerous group of fundamentalists. These people actually censored a timeline in a history book so that there was a big white blank just before Pearl Harbor, since learning about the Great Depression might not give schoolchildren a 100% positi

Published by Thriftbooks.com User , 20 years ago
Anyone with curiosity about education policy in this country should immediately read this book. It is a study on how nearly invisible bodies of decision makers shape textbooks to their attitudes. She deals mainly with the state boards of education in Texas in California. One reason for this is that since they are the most populous states, publishers are more responsive to the attitudes and revisions of these two boards. Another reason is that since the political culture in the two states is so different, she can hardly be accused of anything other than excellent scholarship. The end result is that apart from the nature of political attitudes in these two regions, there is more than enough willingness to impose revisionist standards on what is eventually taught in the schools.An excellent, and at times chilling, study of a nearly opaque process in our democracy; where views and attitudes of the current political climate are imposed on history, to the deteriment of history and of children.

Published by Thriftbooks.com User , 22 years ago
Delfattore takes a case by case study of textbook censorship and what she comes up with is absolutely frightening. Anyone with a will can change the content of school textbooks. This is a must read for teachers!
Copyright © 2020 Thriftbooks.com Terms of Use | Privacy Policy | Do Not Sell My Personal Information | Accessibility Statement
ThriftBooks® and the ThriftBooks® logo are registered trademarks of Thrift Books Global, LLC