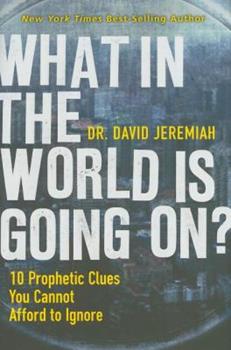 What in the World Is Going On?: 10 Prophetic Clues You Cannot Afford to Ignore

Is the current economic and political crisis actually prophesied in the Bible? If so, what are we to do about it? It is hard to piece together all this information in a way that gives a comprehensive picture of what the end times will look like. That's why so many theories abound. And that's why Dr. David Jeremiah has written What In the World Is Going On? , a unique book that cuts through the hundreds of books and numerous theories to identify the...

Published by Thriftbooks.com User , 14 years ago
Books on end times prophecy often overextend themselves with specific interpretations and speculation on exact events of the future. David Jeremiah avoids this extreme with solid scholarship mixed with interesting stories and anecdotes. The book does a good job of explaining Daniel's prophecies, along with salient passages from Revelation, Jeremiah and Zechariah, while quoting such diverse modern sources as Nicolaus Sarkozy, Mahmoud Ahmadinejad, Dutch Bishop Muskens of Breda for their perspectives on current events. I have read several of David's books and, IMHO, this is his best to date. The book's subtitle is, "10 Prophetic Clues You Cannot Afford to Ignore." Jeremiah devotes a chapter to each of his "clues" as follows: 1. The Israel Connect 2. The Crude Awakening 3. Modern Europe... Ancient Rome 4. Islamic Terrorism 5. Vanished Without a Trace 6. Does America Have a Role in Prophecy? 7. When One Man Rules the World 8. The New Axis of Evil 9. Arming for Armageddon 10. The Return of the King Jeremiah writes (and interprets Scripture) from the Dallas Seminary dispensational pre-millennial, pre-tribulation rapture viewpoint. I disagree with his projected order of coming events, but admire his accuracy in handling the history of Israel, the development of the oil industry, Islamic Terrorism, and "The New Axis of Evil." Taken as a whole, this book provides a great, broad view of what is occurring now and will be coming in the not-too-distant future. "What in the World is Going on?" is easy to read, holds attention, and gives a helpful overview of coming events. I believe every Christian ought to be studying this subject at this time in history because we are either on the brink of revival, or rapidly advancing towards the culmination of this phase of earth's existence. I recommend this book to you.

Answers to Today's Pressing Questions on the Future

Published by Thriftbooks.com User , 14 years ago
In this pivotal book by Dr. David Jeremiah concerning what would be considered by most of the world as the top "10 prophetic clues you cannon afford to ignore". This is not just a Christian book, but one that all diversity groups speak about. What In The World IS Going On? and how long has it been happening right under our noses? Answers to questions such as are we moving into a New World Order, North American Union, Transcontinental Union with the European Union are answered. What countries really make up the army that comes against Israel--and why will Israel still stand? What is the biblical timetables for this battle. There is much talk today that Israel or the US should fire upon Iran soon. On the other hand, Iran says it is going annihilate the US and Israel; wipe both off the face of the earth. Many believe it is now and that brings us to the end of times. Dr. Jeremiah gives amazing facts and information crossing the lines of: * Domestic * International * Political * Historical * Christian * Islamic * Industry * Trade - not just oil but all commerce changes * National Security - moving closer to NAU and NWO * Keys to National Collapse He then speaks directly to what most people want to know--WHO is the Anti-Christ? Many have been called this despot over the decades, but none have come to pass-yet. Who is on the radar of scholars and prophetic interpreters? There are some surprising documentation in What In the World Is Going On? Dr. Jeremiah puts the information in an easy to read format. Each chapter speaking to a specific topic. A must read for those who are curious, and those who want information.

Published by Thriftbooks.com User , 14 years ago
This is a MUST READ for every Christian. It will admonish you to a more disciplined and intentional walk, encourage you for the hope that is our future, and enlighten you to the subtleties of the enemy to get us off course. I bought 15 copies to give away to friends.

Published by Thriftbooks.com User , 14 years ago
Dr. David Jeremiah's book "What in the World is Going On?" is a guide to events that are ocurring before our eyes. When I got it I could not stop reading it; I red it in 3 nights. (and I'm a slow reader) but the book, is so current, and it is a wonderful guide for the Believer. Dr. Jeremiah exposes current facts with a Biblical perspective in such a way that is so easy to comprenhend, and see the news later on at night, so that we can identify in what times we are living. It is indeed a good investment of your money and time.
Trustpilot
Copyright © 2022 Thriftbooks.com Terms of Use | Privacy Policy | Do Not Sell or Share My Personal Information | Accessibility Statement
ThriftBooks® and the ThriftBooks® logo are registered trademarks of Thrift Books Global, LLC