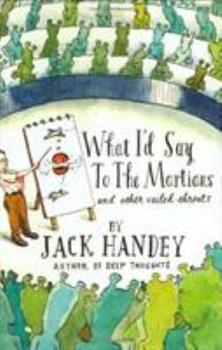 What I'd Say to the Martians: And Other Veiled Threats

Jack Handey is one of America's favorite humorists, from his New Yorker pieces to his Deep Thoughts books and Saturday Night Live sketches. Now, in What I'd Say to the Martians , Handey regales readers with his incredible wit and wacky musings.

Good luck finding a more hilarious book. (And if you do, please tell me what it is.)

Published by Thriftbooks.com User , 12 years ago
Jack Handey has by now completely proven that his humor is not some dated 1990s relic--his Deep Thoughts and Fuzzy Memories are every bit as funny to read today as they were when they were first written. I've collected all of his books, read and re-read them, and quite frankly I think he is among the funniest and most timeless satirists America has ever had. His command of the startlingly random and the absurdly insightful is unparalleled, and having his many NEW YORKER and OUTSIDE pieces collected here with much of his other hilarious miscellany makes this book a must-have for anyone unashamed of having permanent laugh lines on his or her face. This is not, it should be noted, a collection of merely "clever" or "humorous" writing that will evoke little more than knowing nods, wistful smiles, or the occasional chuckle. This book is HILARIOUS--the sort of thing that might destroy a relationship if read while sitting across from a significant other with your mouth full of milk, the sort of thing that will incite (welcome or unwelcome) public interactions with fellow bus passengers wondering what the hell is so funny, the sort of the thing that might make you laugh so hard that the laughter becomes more painful than fun. This book IS FUNNY. It's by Jack Handey--of course it's funny. My only complaints about the book--aside from some minor inconsistencies in the traits of the central character, such as his wife's name--are that all of the Deep Thoughts and Fuzzy Memories reprinted in the "My Favorite Deep Thoughts" and "Fuzzy Memories" chapters are selections that were printed previously in the other books; I was really hoping to see some of those that had slipped through the cracks, such as-- "Whenever I hear the sparrow chirping, watch the woodpecker chirp, catch a chirping trout, or listen to the sad howl of the chirp rat, I think: Oh boy! I'm going insane again." or "I remember the time a woodpecker started pecking on the tree outside Mom and Dad's room. He would peck on that tree day and night. Dad tried everything to get rid of him. But nothing seemed to work. So Dad killed himself." And those are just the ones involving woodpeckers, but they're not included here; ones you've already read in other books are. Handey must be saving them for another book, or maybe I'll just have to get the FUZZY MEMORIES CD-ROM with the extra memories, and that's fine, but I had really hoped to see them here. I am happy to report, however, that a number of Handey's very funny "Big Thick Novel" pieces made it into the book, as "Little Tiny Stories." My favorite of those, at least at the moment, is "Adrift": "I drifted in the lifeboat for days, maybe months. To be honest, I guess it wasn't months. That would be too long. 'Weeks" is probably too long too, because I would have dried out or something by then. 'Hours' is too short. To tell you the truth, I don't even think it was a lifeboat." The book ends with a number of funny transcripts of

The Legend of Jack Handey

Published by Thriftbooks.com User , 13 years ago
This book ranks right up there with Woody Allen's first three books -- "Getting Even," "Side Effects" and "Without Feathers" -- and Steve Martin's "Pure Drivel." In fact, thanks to the Internet, I thought Handey was just a pen name for Martin these last three or four years. Thanks, Internet. Then again, if not for the Internet, I would never have come across Handey's essays in The New Yorker, which eventually led me to buy this book. Humor is pretty subjective, so if you want to find out if Handey is funny, it's easy enough to find some of his essays across the Internet before you buy the book. Myself, I'd read about ten of the articles and still consider it well worth the price. "The Legend of Me" is about as perfect and funny as I'd ever expect a humor piece to be. Other standouts include "Thank You for Stopping," "The Respect of the Men," "This is No Game," "Mount Everest," "The Draculas" and too many others to remember right now. In fact, there were only a few duds, like "Einstein and Capone." But I'm sure someone out there loved even that one. There are a couple "Deep Thoughts" reprints that feel like padding, even though they don't really add many pages. I think it would have been better to just forget the Deep Thoughts stuff for once and concentrate on the essays. Even the Saturday Night Live sketches at the end, although funny, felt like padding. A few more essays would have been better. After reading the "Zombies vs. Bees" sketch, I could swear I've seen it on TV, even though it says it was never broadcast. I have a perfect image in my head of Carl Weathers dressed like a sheriff with zombies walking beyond the windows. I loved these sketches when I saw them years ago, back when Saturday Night Live used to be good and I had no idea Handey had written them. "Do not taunt Happy Fun Ball?" Okay. Even though I've only recently learned that he does in fact exist, I've been a fan of Jack Handey for a long time. The best line from Steve Martin's classic 80s skit, "What I Believe," was one Handy wrote: "I believe robots are stealing my luggage." That's the one line that I remember the best, because it was the funniest, and I guess that was the first time I ever mistook Jack Handey for Steve Martin, long before the Internet. If you like Martin's written humor, you'll like Handey's too. If you like Handey's Deep Thoughts books, you may or may not like this book. I enjoyed Deep Thoughts on Saturday Night Live, but was never tempted to buy a book of them. Seemed like a cheap attempt at money. Hopefully, another book of essays will follow sometime in the future, or maybe even a novel. So in conclusion, you should definitely buy the Internet.

Too, too, much too funny!

Published by Thriftbooks.com User , 13 years ago
I collect humor books and have been a fan of Jack Handey's work with Saturday Night Live for years. This book of essays is the third funniest book I own - on a wall of comedic masterpieces. 1st place, by the way, is George Carlin's Napalm & Silly Putty; 2nd belongs to Stephen Colbert's I am America. WHAT I'D SAY TO THE MARTIANS: AND OTHER VEILED THREATS is well worth spending money on. The Hitchhiker essay alone will make you glad you bought it!

Published by Thriftbooks.com User , 13 years ago
I've always been a fan of Deep Thoughts, but this book is so much more! It's like each essay is one, long, hilarious Deep Thought. The book includes essays, some of Handey's favorite Deep Thoughts and Fuzzy Memories, as well as a great bonus: scripts of some of his best sketch writing from Saturday Night Live, such as Toonces the Driving Cat, Unfrozen Caveman Lawyer and Happy Fun Ball. Overall, an excellent, hilarious book. Every essay (and sometimes every sentence) has something to laugh at. Hopefully Handey will continue to write and publish!
Copyright © 2022 Thriftbooks.com Terms of Use | Privacy Policy | Do Not Sell My Personal Information | Accessibility Statement
ThriftBooks® and the ThriftBooks® logo are registered trademarks of Thrift Books Global, LLC