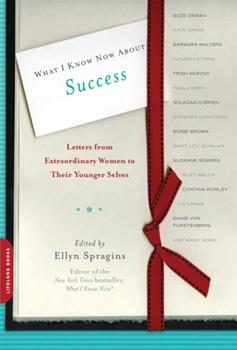 What I Know Now about Success: Letters from Extraordinary Women to Their Younger Selves

In the same manner of the New York Times bestseller What I Know Now comes a collection of letters to inspire and ignite the ambitions of women everywhere. Remarkable women write letters to their younger selves, telling the stories of familiar obstacles faced by ordinary women, who were able to accomplish something extraordinary. What I Know Now About Success includes letters from fashion designer Kate Spade, makeup artist Trish McEvoy, Food Network...

Published by Thriftbooks.com User , 12 years ago
Ellyn Spragins has truly found a niche in asking some well-known, powerful women to write a letter to themselves back at a key point, a fork in the road, or a time of major challenges. I'll bet most of us have thought now and then ---"Oh if I could only go back in time and share some wisdom/support to my younger self." Until full time travel becomes real, that remains a dream. But we can learn from these letters as we plow our way forward. This is her third book in the series of "What I know now," and one which arrives when a generation of girls graduates. Also, as a number of women in mid-career now face layoffs due to the slumping economy. Here are a few examples of inner resolve and strength in the face of serious obstacles: 1. Suzanne Somers of "Three's Company" tv fame reveals a very troubled childhood, including an alcoholic father, and being a single mother at age 18. She climbs up, works hard and then the tv fame --until she just mentions the idea of a possible raise in salary. She writes: "True Success means accepting yourself as you are." 2. For sports junkies: Hannah Storm of ESPN fame writes back to herself "Stop worrying. It's useless." She talks about making progress in a highly-male sports industry. Also leaning on God and her faith as well. 3. And again in sports, Rutgers women's basketball coach Vivian Stringer who handled a a racial slur against the team by radio talk show host Don Imus. Time for a real strength of character. She writes herself to integrate her work with her family. Reportedly, on road trips she would sometimes ride in the car with her family, right behind the bus carrying the team. Other women who participated include Barbara Walters, Soledad O'Brien, Christine Todd Whitman, and Suze Orman. I'm still waiting for Spragins to do such a book on men writing themselves at an early age. But actually there are lessons and realistic inspirations in the book which can apply to almost everyone. Enjoy and keep those letters coming. Earl

What I Know Now About Success

Published by Thriftbooks.com User , 12 years ago
I love these What I Know Now gems from Ellyn Spragins. Every once in a while I turn to them for a little reminding and refreshment: Ellyn's vivid snapshots and the no-nonsense, honest and sometimes humorous advice style. I've picked up some good tips and internalized them. I always remember Olympia Dukakis remembering herself at the kitchen table feeling forlorn. Her letter to her younger self made a strong impression on me. I read mostly non-fiction and a lot about women so the series is right up my alley.

Published by Thriftbooks.com User , 12 years ago
This is Ellyn Spragin's second book and it's as amazingly motivational and inspiring as the first. As a Communications professor, I suggest that all my students read "Success" -- it is a strong way to realize that your dreams come true not with luck but with hard work and positive thinking! We all wish we could go back in time and tweak things that happened to us -- but this book shows that whatever happens, happens for a good reason. Whether you need a pick-me-up, a validation, or just a smile, this book will provide! The timing is perfect for you to buy this book for those you know graduating from college into the "real world"...they will truly appreciate and learn from Ms. Spragins' collection of awesome people!
Trustpilot
Copyright © 2022 Thriftbooks.com Terms of Use | Privacy Policy | Do Not Sell or Share My Personal Information | Accessibility Statement
ThriftBooks® and the ThriftBooks® logo are registered trademarks of Thrift Books Global, LLC