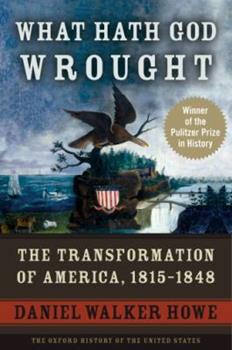 (Book #5 in the Oxford History of the United States Series)

The Oxford History of the United States is by far the most respected multi-volume history of our nation. In this Pulitzer prize-winning, critically acclaimed addition to the series, historian Daniel Walker Howe illuminates the period from the battle of New Orleans to the end of the Mexican-American War, an era when the United States expanded to the Pacific and won control over the richest part of the North American continent. A panoramic narrative,...

Published by Thriftbooks.com User , 14 years ago
I've not read a better American history book since The Metaphysical Club. It's the best synthesis of this difficult period in American history I've ever read. Far less politically driven than Schlesinger's The Age of Jackson, Howe carries us through these 33 years as if he lived them. The quality of his scholarship is nothing short of world class, exhaustive and analytical, subtle and insightful. This is one of the very few books I've ever read that brings history into the realm of art. It's a masterpiece, right up there with Robert Hughes' The Fatal Shore and Wood's The Radicalism of the American Revolution. Now, some details. This book is largely a political, economic and military history, but Howe is far too skilled a scholar to ignore the cultural developments of the young country. While not an intellectual history in the spirit of Menand, Howe interweaves important cultural products and events into their political, religious and economic contexts. His separate treatments of the development of the Church of Jesus Christ of Latter-day Saints and (ironically) gender equality are particularly sensitive and enlightening. There's so much good stuff here that it reminds one of shopping at the local whole foods market: There are tasty discoveries around every corner. Howe's primary thesis is about how the legacy of the Federalists, the Whigs, in response to Jeffersonian (and Jacksonian) democracy run amok, did more to create the modern United States than historians have previously understood. Howe illuminates topics that, at first, seem to offer little hope for exciting history - internal improvements, the development of higher education, transportation and communication, religious revival - but he does it with such narrative skill as to emphasize their importance while encouraging you to consider their subsequent impact on the development of the greatly enlarged United States. Of course, the author then goes on to give us penetrating narrative studies of important political and military events that have been told before, but rarely with such keen insight, or from this subtle and critical perspective. The author leaves us in 1848 to contemplate what the enormous changes of the previous 30 years (and the previous five years, in particular) did, and did not do, to our national consciousness. This is a long book, but you'll not notice. I'm raving about this one because I'm just so excited to see that there are people out there willing to write (and read) good, scholarly, narrative histories of the United States. An essential read for anyone, anywhere in the world, with a keen interest in American history. This book further enhanced my understanding of what it means to be American.

Published by Thriftbooks.com User , 14 years ago
As other reviewers have mentioned, the book is necessarily heavy on political history, though this book is not the tale of the rise and fall of political parties or politicians. Instead, Howe has chosen to evaluate American society largely through a political lens - in fact, he has chosen six major actors to play leading roles in his story: Andrew Jackson, J.Q. Adams, Henry Clay, James K. Polk, John Calhoun, & Daniel Webster. Although he focuses largely on the achievements (or, in some cases the failures) of these men, he does not ignore society as a whole, nor does he ignore military endeavors, such as the Mexican War and the participants in that conflict. All told, this is an excellent synthesis of the period. Professor Howe has demonstrated an extraordinary command of the secondary literature of the period, while incorporating many works of recent scholarship (especially the last 10 years). I was very impressed as I read the book with Howe's skillful weaving of a narrative loosely coupled by the theme of a communications revolution, which is much different than many other works pertaining to this period, which focus almost exclusively on the economic transformation that took place in this period. I was equally impressed with Howe's command of the entire nation; unlike many books about this period, he did not sectionalize the book; by not focusing on just the Southern US, or just the Eastern seaboard, he allows the reader to understand the whole picture. This is a worthy addition to any library of one who is intrigued by US History, even if that reader is not a 19th century specialist. I would even encourage professors to consider assigning this as a basic text (despite the fact that it is a rather lenghty tome at 860+ pages) for an upper level survey of Jacksonian America. It is a much appreciated addition to the Oxford History of the United States series.

An exhaustive, and exhausting, review of a key period of American History

Published by Thriftbooks.com User , 14 years ago
This nearly 900 page tome is an amazing work of history. It covers in amazing detail one of the most critical periods of American history, from the Battle of New Orleans in the War of 1812 through the discovery of gold in California and then ensuing gold rush. The work is both exhaustive and covers every aspect from political, to economic to social developments. Make no bones about it, this is not a work you want to read unless you are willing to devote a) two weeks to the materials b) enjoy reading a complete history of the era and c) have a passion for the series. The author does a very good job at highlighting both the compelling major figures of the era with some of the more unique people who later on became more influential. Either way this is another feather in the cap of the Oxford History of the United States!

A comprehensive overview of a dynamic young nation

Published by Thriftbooks.com User , 14 years ago
The decades following the War of 1812 witnessed some of the most dramatic changes in our nation's history. In that time, the United States underwent political, economic, and social transformations that dramatically reshaped the country, taking it from its post-colonial emergence and setting it on the road towards its dynamic emergence in the world. Daniel Walker Howe's book is a narrative of these years and the changes that took place, as well as what those changes meant to the future of the country. Though Howe examines nearly every aspect of the period, politics dominate his coverage, which is understandable given his background as a political historian. The figure of Andrew Jackson looms large in these pages, yet Howe rejects any characterization of the era as "Jacksonian", arguing that the phrase glosses over his controversial and divisive nature. This controversy is reflected well within his account, as Howe is highly critical of Jackson (something that is somewhat predictable from the start given that his book is dedicated to the memory of John Quincy Adams), asserting that the seventh president demonstrated an authoritarian bent throughout his career. His arguments on this, as with so many other parts of the books, are convincing, and supported by an impressive command of the scholarship on the period. Nor is the author shy on asserting his own viewpoint in these debates, arguing that a "communications revolution" was more demonstrable than the "market revolution" seen by Charles Sellers and others, that the emergence of the market economy was not the negative development Sellers made it out to be, and that Jackson's campaigns were hardly the democracy-expanding force asserted by historians such as Sean Wilentz. These historiographical assertions do not slow down his work, however; if anything, he could have engaged them a bit more within the text to explain why such interpretations are contestable. This is a minor quibble with a major achievement. Broad in scope and encompassing an impressive amount of material, Howe provides a readable and perceptive survey of a dynamic young nation, one that experienced a breathtaking number of changes during these years. His book is among the best entries of the "Oxford History of the United States" series, and surely will be a standard text on the era for many decades to come.

Published by Thriftbooks.com User , 14 years ago
What Hath God Wrought, the latest entry into the marvelous series, The Oxford History of the United States, by Daniel Walker Howe, is another major score for readers and historians alike. It is well a thought out, broad in scope, interesting in concept and a very readable narrative of the United States from the end of the War of 1812 (1815) to the end of the Mexican American War (1848). Howe's subtitle, "The Transformation of America" is proven in an interdisciplinary way throughout its pages. Perhaps the editor, David M. Kennedy, puts it best, "Like Tocqueville's (Democracy in America), his deepest subject in not simply politics - though the pages that follow do full justice to the tumultuous and consequential politics of the era - but the entire array of economic, technological, social, cultural, and even psychological developments that were beginning to shape a distinctively American national identity. Howe brings to bear an impressive command of modern scholarship to explicate topics as varied as the Mexican War; the crafting of the Monroe Doctrine and the clash with Britain over the Oregon country; the emergence of the Whig, Free Soil, and Republican Parties; the Lone Star revolution in Texas and the gold rush in California; the sectional differentiation of the American economy; the accelerating pace of both mechanical and cultural innovations, not least as they affected the organization of the household and the lives of women; and the emergence of a characteristic American literature in the works of writers like Emerson, Henry David Thoreau, James Fenimore Cooper, Margaret Fuller, Frederick Douglass, and Walt Whitman." Howe himself lives up to his words - "Along with the traditional subject matter of history - political, diplomatic, and military events - the story includes the social, economic, and cultural developments that have extensively concerned historians in recent years. This reflects my own conviction that both kinds of history are essential to a full understanding of the past." This is a fabulous historical narrative of a period in history that is generally, and wrongly, simply viewed through the "Jacksonian Democracy" lens. A fine read and clearly worthy of this terrific and scholarly series by the Oxford University Press. On a somewhat different note, it appears as if readers are in for a treat over the next 12- 24 months with the "missing" volumes at least having manuscripts into David Kennedy (Freedom from Fear) and the series' new editor with the passing of C. Vann Woodward. Volumes 1 and 2, covering the Colonial Period (1672-1763) have been assigned, in some order, yet to be made public (that I am aware of) to Fred Anderson (University of Colorado) and Andrew Cayton (Miami University of Ohio). Volume 3 - The Glorious Cause 1763-89, Robert Middlekauf PUBLISHED Volume 4 - The U.S. from 1789-1815, Gordon Wood (Brown University) Volume 5- What Hath God Wrought 1815-48, Daniel Walker Howe (UCLA) PUBLISHED and revi
Trustpilot
Copyright © 2022 Thriftbooks.com Terms of Use | Privacy Policy | Do Not Sell My Personal Information | Accessibility Statement
ThriftBooks® and the ThriftBooks® logo are registered trademarks of Thrift Books Global, LLC