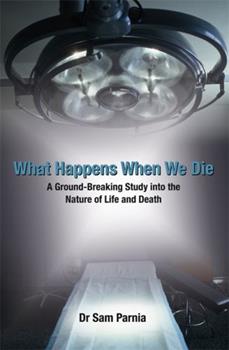 What Happens When We Die: A Ground-Breaking Study Into the Nature of Life and Death. Sam Parnia

In hospital Dr Sam Parnia faces life and death issues every day. Through his work in critical care, he became very interested by some of his patients' accounts of the experiences that they had while clinically at the point of death. He started to collect these stories and read all the latest research on the subject. He then decided to conduct his own experiments, and his work has culminated in this extraordinary book. Picking up where Raymond Moody's...

Published by Thriftbooks.com User , 12 years ago
This was an excellent book! The book provides information about near death experiences and studies surrounding their existence. This book also provides details about the varying studies that have already been conducted or are currently being conducted to objectify near death experiences. This book caused me to further consider life after death and to engage in a bit of philosophical thought on the subject matter.

Published by Thriftbooks.com User , 13 years ago
As a hospice nurse, i felt that this was a good resource book for those friends or families that are on hospice. It really explains, rather well, what to expect during the dying phase.

Published by Thriftbooks.com User , 14 years ago
Sam Parnia wrote a book without an ending. That is because he was unable to complete his research due to a lack of funding into near-death experiences (NDEs). The reason was simple--there is prejudice in the research community over the funding of projects of this type. Dr. Parnia raises thought-provoking questions about the nature of consciousness and is to be commended for trying to tackle the biggest problem facing us all--death. So we are left with a book that has no ending (but an intriguing beginning) that I suspect was written to raise money for further studies. The biggest problem the book raises is how people can have lucid thoughts (NDEs) during cardiac arrest when there is no blood flow and no electrical activity in the brain. Dr. Parnia would benefit from reading Rick Strassman's book, "DMT: The Spirit Molecule," and noting that NDEs share some of the features encountered in other altered states induced by stress, temporal lobe epilepsy, and powerful entheogenic substances. (Dr. Parnia mistakenly glosses over these areas in his book.) Dr. Strassman brought up a viable link between these experiences and reports of UFO abductions suggesting a comparable process within the mind. A curious similarity in UFO abduction reports, shamanic (religious) experiences induced by physical stress or entheogens, and NDEs is reports of subjects' bodies being tied by a cord or beam of light to their "selves" in the heavens (a phenomenon similar the biblical story of Jacob's ladder). Implications of this type leave people uneasy about the possible examination of religion by science; two areas that merge as easily as oil and water. These links suggest a common source that hopefully will be investigated when barriers to this kind of research are removed and more open-minded, scientific investigators like Dr. Parnia are allowed to do their research.

Published by Thriftbooks.com User , 16 years ago
As a person who probably like many others has had to deal with the pain of seperation of a loved one, I too have faced the question of what happens when we die. This is a sad reality that comes to us all and so I found it refreshing that science has attempted to tackle this question. I found Dr Parnia's book refreshing to read as it is highly informative, yet lighthearted and engaging. More importantly I was excited to see that at least scientific researchers have attempted to tackle the issue of the afterlife, which for so many years has been a taboo. I think there is still a long way to go but this book provides a great introduction. It summarizes and explains current scientfic thoughts regarding this subject. There is a comprehensive summary, based upon the medical literature on the subject of near death experiences at the begining of book. This then sets the tone for what is to follow, which is a mixture of real people's experiences including very young children as well as new and novel scientific research. This combination is very good as it provides a real understanding of what people experience when reaching the point of death and also means that the book is not bogged down with too much science. In the following chapters the rationale and need for further research is explained, as well as the results of Parnia's own small scientific study which tested the theories of causation of near death experiences. This study which seems to have been the first, found little evidence to support the view that these experiences are hallucinations brought on by lack of oxygen or use of drugs. What follows is a summary of other ground breaking research carried out by other notable researchers such as Professor Bruce Greyson and Dr Pim Van Lommel, the results of which in many ways complemented Parnia's own study. Astonishingly to me, Parnia's work was well received by the scientific community with publications and also many invited lectures at prestigious institutions such as Harvard, UCLA and Caltech. The conclusion of the researchers including Parnia was that thought processes and consciousness may continue at the end of life when brain function has ceased. This creates a scientific dilemma, as it would mean that science would have to re-think its views on the relationship between the mind and brain. This is an area of scientific controversy that I knew very little about, but it is explained very well, and in simple and easy to understand terms in this book. There is also reference to the role of physics and in particular particle physics in understanding the nature of the human mind and consciousness and its relation with the brain. Dr Parnia admits that there is need for further research and I am disappointed that this hasn't yet been done, however I applaud the fact that he and many others have been courageous enough to bring this to the attention of mainstream science, sometimes under very difficult professional circumstances and at great

At The Very End

Published by Thriftbooks.com User , 16 years ago
This book should be read by anyone who expects to die sometime. Others have no need for it. We do not know when, or how, but no sane person denies the inevitability of their eventual demise. We are (probably) the only species to posses this bit of information about our collective future. Knowledge of death comes in bits and pieces when we are children. It undergoes a period of stout denial in adolescence and young adulthood, when we are well aware that others might die, but not necessarily us. For millennia governments have sent people in such a state of denial to fight to the death against other youth, from other countries, who are equally or more deluded that their own youngsters. Ever so slowly the idea of our own death makes an occasional appearance into our consciousness as young people, and then such appearances accelerate in frequency as we age, to the point that old people think about death on a daily, or even hourly, basis; and yet we know little about the process itself, and even less about what happens afterwards, if anything. This book does not have all the answers, but it certainly poses these questions very nicely. Sam Parnia belongs to a group of physicians who have studied the reports made by patients after having been technically dead, but who have recovered and told takes of wondrous events that took place during that apparent period of no oxygen, no heartbeat, and no life: many patients report floating above the frantic medics who are trying to resuscitate them, they tell about conversations that happened while they we unconscious, and speak about experiencing a great calm as they float through a tunnel towards a marvelous light; they mention being greeted by long dead relatives, and then about being informed that it is not yet their time, that they must go back. They suddenly awake in a hospital bed, reluctant to tell about their adventures lest they be called crazy. These experiences were first studied methodically by Dr. Ray Moody, who published a book about them in the late 70's. Dr. Parnia acknowledges Dr. Moody's contributions, but takes his studies further; after all, medical technology has advanced dramatically since then, and at present there are machines that detect brain activities as a functions of oxygen usage or glucose consumption. Visualization of the brain, a rarity in the 70's, is commonplace with new computerized scanning devices. Dr. Parnia is a modest but extremely well informed man, and his book contains both dramatic anecdotes of people in Near Death Experiences (NDE), and meticulous accounts of the anatomical and neurological changes that take place during the process of dying. As a good scientist he is neutral about the religious implications of possible continued existence following the physical death of the body; his interest is trying to study methodically the questions raised by NDE. Surely lack of nutrients and oxygen will result in the death of neurons and consequent brain damage. Yet he narrat
Trustpilot
Copyright © 2022 Thriftbooks.com Terms of Use | Privacy Policy | Do Not Sell or Share My Personal Information | Accessibility Statement
ThriftBooks® and the ThriftBooks® logo are registered trademarks of Thrift Books Global, LLC