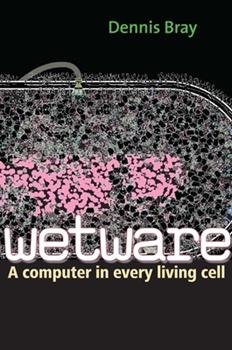 Wetware: A Computer in Every Living Cell

In the tradition of as Erwin Schr dinger's What Is Life? and Richard Dawkins's The Selfish Gene, a distinguished cell biologist explains how living cells perform computations How does a single-cell creature, such as an amoeba, lead such a sophisticated life? How does it hunt living prey, respond to lights, sounds, and smells, and display complex sequences of movements without the benefit of a nervous system? This book offers a startling and original...

Published by Thriftbooks.com User , 12 years ago
I'm extremely happy that Prof. Bray decided to write this book. Little by little biologists and computer scientists are realizing that they are studying two sides of the same coin. It is one of the most profound and important achievements of the 21st century. It will truly change everything.

This is one fantastic book!

Published by Thriftbooks.com User , 13 years ago
This book blew me away - my head is spinning - I'm a firm believer in evolution (of course), but having read this book I have more of a glimpse of the complexities involved I've decided that we can't possibly exist (grin). Of course the title of this book doesn't imply a computer like we think of ... more the ability to perform computations and make decisions. To be honest I hadn't really thought about this stuff in this depth before, but as it says on the cover: "How does a single-cell creature, such as an amoeba, lead such a sophisticated life? How does it hunt living prey, respond to lights, sounds, and smells, and display complex sequences of movements without the benefit of a nervous system?" Having read this book I can just about understand how an amoeba can move around and hunt its prey etc ... and I can also understand how groups of similar cells can perform "quorum sensing" (detect their relative concentration - i.e how many of them are there in a given area) ... remembering that we're talking about single cells here... But to go from there to the current peak of human evolution (that would be me ... and you I suppose ... but let's focus on me :-) ... well, all I can say is that "the mind boggles" ... I'm still trying to wrap my brain around everything that I learned. This is a fantastic book - highly recommended!!!

Published by Thriftbooks.com User , 13 years ago
The premise for this book is that systems of proteins can convey and process information at the level of a single free-living cell. These proteins act as switches or transistors, functioning as the nervous system does for multicellular organisms. Bray presents abundant evidence that this is the case. Several well-studied cellular examples (e.g. bacterial chemotaxis) are used to illustrate the principle that complex behaviors and even the appearance of "consciousness" can be the product of relatively simple combinations of switches and outcomes. This is augmented by discussion of simple robots (e.g. Grey Walter's "tortoises") and computer games (e.g. PacMan), illustrating the point that some extremely complex behaviors can result from extremely simple circuits and motors. His insight that "it is much more difficult to infer internal structure from the observation of behavior than to create the structure that gives the behavior in the first place" is a powerful one, and should give pause to anyone who subscribes to the notion of "intelligent design", or who thinks that cellular activities are "irreducibly complex". Humans can be easily fooled into believing that human-like attributes can only be attributed to human-like intelligence.. But the notion that a cell is so complex that it must have been designed by a supernatural agent is similar to the response one might imagine if a caveman was confronted by a simple robot. In both cases the object seems beyond comprehension; in both cases the object can actually be described by simple physical laws, circuits and switches. Bray brings the full force of his experience and intellect to this book, showing the way toward a deeper understanding of single-cell behavior, neural net capabilities, and our innate ability to infer consciousness or agency in systems that actually have a very simple network of switches and outcomes. It is important to understand that Bray is not saying that single cells have what we call "consciousness", but they do have properties that could be described as short-term memory, intentions, and learning. Clearly these properties cannot be the result of a brain and nervous system, but must be based in a far simpler circuitry of proteins and environmental cues. Complete appreciation of this book will require some basic biological education; some of that is supplied by the author while other concepts are assumed. His perspective allows us another step away from the brain/mind Descartian dualism that seems to be making a comeback among anti-intellectual and anti-scientific proponents of theological arguments such as intelligent design. The arguments thus have not only scientific ramifications, but cultural and philosophical ramifications as well.
Trustpilot
Copyright © 2022 Thriftbooks.com Terms of Use | Privacy Policy | Do Not Sell or Share My Personal Information | Accessibility Statement
ThriftBooks® and the ThriftBooks® logo are registered trademarks of Thrift Books Global, LLC