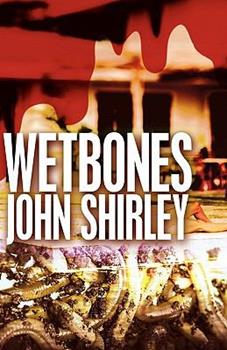 "WETBONES, the acclaimed and viscerally powerful work by John Shirley, is being released for the first time in a new, improved form. *Fully revised and updated edition. *First fully-author-approved text ever released. *INCLUDES a Brand-New companion story. Never before published. Down -on-his-luck screenwriter Tom Prentice is called to the morgue to identify the body of his ex-wife Amy. She's recognizable--but her body is also 50 pounds underweight,...

best book ever on addiction and scary as hell

Published by Thriftbooks.com User , 16 years ago
John Shirley is conveying alot more than most people will understand in wetbones.its a great story, full of great characters and bizarre, twisted,horror on the surface. but one of the things i really liked about this book are some of the underlying themes relating to the occult, the astral plane, and all aspects of addiction, that would be difficult to convey except through the metaphor of the most bizarre creatures ever imagined.its a smooth read with good suspense,interesting ideas to ponder and best of all the kind of relentless horror that goes just enough over the top that its exciting and disturbing and freaks you out. this is a great book for recovering addicts, those of you out there who read it will know what im talking about.

Disturbing, with a great big helping of Revulsion

Published by Thriftbooks.com User , 20 years ago
This isn't your namby pamby, tip toe around the details Horror. This is in your face, Oh my God I can't believe that just happened, Horror. Good Horror.The story is both involving and intriguing as well as extremely heart wrenching. Also, it's undeniably gross. A Lovecraftian tale of the less subtle variety; of things existing just beyond the threshold of our reality and the next.An unspeakable horror, capable of reducing a human to an amorphous pile of gore and bones in seconds. A creature that endows men with the power to control the thoughts, and actions, of others. A creature that thrives on the darkest perversions. A creature that hungers to be very much a part of our world.You will be amazed. You will be shocked. Your eyes will bulge, your gorge will rise.The talent of John Shirley is apparent here. This was the first piece of writing I had ever read by the author (except for the lyrics on Blue Oyster Cult's album Heaven Forbid) and now I can't wait to read more of this demented man's work.A word of warning to the faint of heart: Wetbones is what some might call Splatter Horror. It bears all the subtlety of an upside down crucifixion. So pregnant women, people with heart conditions, and those with weak stomachs, proceed with caution. But by all means proceed. Don't let the numerous typographical errors sway your judgement either, this is a damn fine example of Horror fiction, even if the editor assigned to it was a complete idiot.

This is a contemporary horror masterpiece!

Published by Thriftbooks.com User , 21 years ago
A lot of things can be said about this book but "dull" has no place in any description about this book. And yes, stick to Stephen King if you want the same old predictable and formulated horror novel written from the imagination and not the soul / from experience. The only problem with WETBONES is that it's horribly misunderstood. The author presents us with a familiar surrounding - the filthy and one dimensional city of Los Angeles. However, we find out that it's actually 4 dimensional. For the most part the other reviews here do describe some of what goes on in this book so I won't bore you with attempting to elaborate... just read this book. John Shirley speaks from his own horrors of drug and sex addiction and when an artist pours his soul into his work it ceases to be pornography, it is art. This book is dark and ugly and highly confrontational in regards to addiction and its consequences as well as the nature of humanity. It is raw and visceral and honest in ways I've never experienced before. This book is a profound story with a message which may be too honest for most people to handle... John Shirley pulls no punches and even I wished that I could put the book down and forget I had heard of it, but I couldn't because it's too compelling as a horror novel, as a drama, as well as somewhat of an autobiography in symbolic and metaphorical ways. John Shirley simply made it severe enough that people would take notice. Whether you love it or hate it WETBONES leaves its mark. It's a pretty hardcore book and not for the squeamish. It is ultimately about hope and pulling through the darkness of our souls (and what feeds on them)however it is a long and hard journey through that darkness and the only way past it is through it. Read this book and if you don't feel anything than stick to flat and "dull" works of other horror writers who only wish they could write like Shirley. Wetbones is a journey to places within ourselves that we don't want to be or see, but that's the beauty of it and the formula for really good horror. Out of a possible 5 stars I give it 10. There is no other book like this and more than likely there never will be again.

Faint of heart---stick to Stephen King!

Published by Thriftbooks.com User , 22 years ago
Being a John Shirley fan for years, I was overjoyed at being able to get another of his books. This one, with its graphic gory detail made me squirm as I read it. With increasing dread I turned each page. Truly, John Shirley knows how to do it and where its at! If you like it down and dirty and you like it bloody and you like it REAL, READ THIS BOOK! Just don't blame me for your nightmares.

splatterpunk too weird for the mainstream

Published by Thriftbooks.com User , 24 years ago
_Wetbones_ by John Shirley combines the 3 Ms - murder, mutilation (to the point of maceration), and mind control into an erotic, yet extremely graphic splatterpunk novel probably too strange for the mainstream. A cult-like group can manipulate people by stimulating their brain centers and doling out Punishment or Reward. Several people with nothing apparent in common -- a man hung up on his ex-wife's death via self-mutilation, another searching for his juvenile deliquent brother, a reverend who counsels drug addicts, and an ex-cult member performing grotesque murders -- all find their paths crossing at the cult's compound. At the compound they discover unspeakable rituals and the cult's secret of mind control. However, _Wetbones_ does more than just describe the horror of hacked-up human bodies; it is also a study of addiction and the depths of despair. Its intensity and flat out weirdness make this book a highly recommended read for the "slice-and-dice" horror set.
Copyright © 2020 Thriftbooks.com Terms of Use | Privacy Policy | Do Not Sell My Personal Information | Accessibility Statement
ThriftBooks® and the ThriftBooks® logo are registered trademarks of Thrift Books Global, LLC