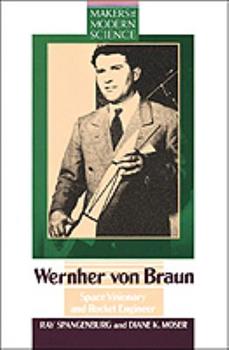 (Part of the Makers of Modern Science Series)

The Makers of Modern Science set profiles the lives and achievements of those men and women who made great contributions to scientific knowledge in the late nineteenth and twentieth centuries. In clear prose, free of technical jargon, each scientist's achievements are fully examined, including the scientific principles underlying his or her work. Each volume draws upon primary source materials to depict the human drama of science, conveying the excitement...

Published by Thriftbooks.com User , 19 years ago
This is a very good book that covers the life of Dr. Wernher von Braun without getting too deep in details. The book is a quick read at about 130 pages but you still get a good overall view of von Braun's life. The best part of the book is where the authors cover the years before von Braun became involved with NASA. They do not shy away from his involvement with the German SS and the problems he faced from his past after he moved to the United States, yet they do not paint him as a war criminal as some have attempted to do. This book sites sources and contains a glossary and is well indexed. There are a few technical and editing mistakes (the Apollo-Soyuz mission did not take place in 1957 as stated on page 117, nor were Saturn rockets used for any Gemini missions as stated on page 104), but these problems do not override the main thrust of the book. If you have heard of Dr. von Braun and have wanted to know more, this is a great introduction to the man and his interesting life.

Published by Thriftbooks.com User , 20 years ago
This was an interesting book. I probably would not have read this book if my great-grandfather wasn't a member of von Braun's rocket team that came over from Germany. I learned a lot about World WarII from this book. I even learned a little about rocket propulsion(how a rocket goes).
Trustpilot
Copyright © 2022 Thriftbooks.com Terms of Use | Privacy Policy | Do Not Sell or Share My Personal Information | Accessibility Statement
ThriftBooks® and the ThriftBooks® logo are registered trademarks of Thrift Books Global, LLC