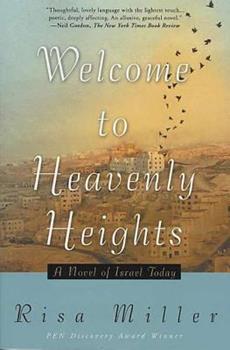 A first novel written by PEN Discovery Award Winner Risa Miller, Welcome to Heavenly Heights describes a group of American Jews who have left the United States, not just to move to Israel, but to live in a settlement on the West Bank. Miller conjures a culture and a movement--part religion, part pipe dream--viewed through the pinhole of one ragged apartment building's door: its families, their dinners, their weddings, their marriages, their sorrows...

A realistic portrait of current life in Israel

Published by Thriftbooks.com User , 19 years ago
Through wonderful character development, Risa Miller has managed to capture a realistic view of life in the settlements and all of Israel. I read the NY Times review of this book before my last visit to Israel and on returning read this wonderful book. The people there are so full of life, so committed and are suffering, but in spite of the suicide murderers, they continue to live life. Mrs. Miller so gracefully captures their zest for life and there fear of what may come.

Published by Thriftbooks.com User , 19 years ago
Whether or not the the main character in a book is sympathetic has no reflection on the quality of the book itself; if the author bothers to indulge in "beautiful descriptions," obviously they ARE important or integral to the story, and any belief otherwise is simply due to a lack of perception or depth of understanding on behalf of the reader/reviewer. I found "Welcome to Heavenly Heights" to be an excellent, lyrical read, its characters and storlyine deeply insightful and educational. Miller's novel is one of depth and meaning, unlike much of the mediocre literature out there today. The "rave" is truly deserved.

glimpse into the lives of Israelis

Published by Thriftbooks.com User , 19 years ago
Reviewed by Judy DoengesSunday, January 12, 2003; Page BW10 Risa Miller's first novel, Welcome to Heavenly Heights is a story of community. In Israel's West Bank, several orthodox Jewish families from America have settled to make aliyah, a return to the land. Among them are Tova and her husband, Mike, who leave their upper-middle-class life in Baltimore for an apartment in Heavenly Heights, hard by the Jordanian border. Tova and Mike and their three children immerse themselves in the lives of the complex's other residents and attempt to adjust to ever-circling army helicopters and bomb searches.Miller depicts their marginal existence in remarkable prose: The blue Judean sky is like "an eye restraining itself from tears." Miller's fine writing contrasts the emigrants' religious rituals with the stark life outside their homes. There's devotion in almost every moment of the settlers' days; even starting life over in Israel is a sign of religious dedication.To Miller's credit, the settlers are not homogeneous. Tova's closest friend, Debra, was raised in Appalachia on country music and stories of her absent Jewish father. Now Debra sings twangy versions of spiritual songs. Fiery Sandy has only one child, which makes her an anomaly in the building, and she has difficulty seeing her son for the troubled child he is. Mr. Stanetsky, a Holocaust survivor, is the building's mortgage godfather, a rich immigrant who subsidizes the settlers' payments.The novel doesn't have a plot per se; instead it charts the settlers' emotional and spiritual adjustments to Israel and to their perceived roles as pioneers. However, what Miller's novel lacks in action is more than made up for by her memorable portraits of people out of sync with both the country they've left behind and with the political reality of their new home.Judy Doenges is the author of "What She Left Me"; she teaches at Colorado State University. © 2003 The Washington Post Company

Published by Thriftbooks.com User , 19 years ago
a good friend recommended this to me, and i'm glad she did, it was a wonderful read and i look forward to more books from Risa Miller!

Welcome to a great read

Published by Thriftbooks.com User , 19 years ago
This was truly one of the best books I've read in a long time - written by an author who likes her characters! I enjoyed spending time with them, felt like I really knew and understood them. Without fanfare, Miller juxaposes the everydayness of being home with children with the danger of doing that on the West Bank in Israel. With surefooted, evocative writing, she tells us why that makes sense. When do we get a sequel? Debbie Goldhair
Trustpilot
Copyright © 2022 Thriftbooks.com Terms of Use | Privacy Policy | Do Not Sell My Personal Information | Accessibility Statement
ThriftBooks® and the ThriftBooks® logo are registered trademarks of Thrift Books Global, LLC