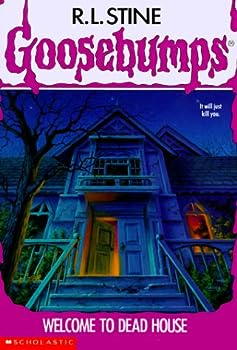 Welcome to Dead House (Goosebumps, No. 1)

Enter at your own Risk: The first ever Goosebumps. Now with creepy bonus features 11-year-old Josh and 12-year-old Amanda just moved into the oldest and weirdest house on the block--the two siblings... This description may be from another edition of this product.

Let R.L. Stine scare a little life into you!

Published by Horror crazy , 2 years ago
Amanda and Josh think there’s something a little strange about the new town they have just moved to... a little sinister. The secret may lie in their creepy, new house... and in the even creepier graveyard. Will it be too late to save their parents once they’ve learned the horrible truth? After all, they’re about to find out exactly why their neighbors don’t seem too lively. This spooky, mysterious tale, the first book in the Goosebumps series, will thrill young readers who are looking for a creepy, enjoyable supernatural horror tale!

Not the best of the Goosebumps, but definitely a classic

Published by Jordan , 3 years ago
This is not my favorite of all the Goosebumps books, but it is fun to relive the thrills of childhood. It's the one that started it all, a must-read for any 90s kid.

The Book With a Poster and Sneak-Peek

Published by Thriftbooks.com User , 14 years ago
Things come and go in cycles and everything that was old is new again. Such is the case with the popular Goosebumps series of books. First published in 1992, some of the books are being reissued in a special collector's edition. The special collectors editions include a limited-edition poster feature Slappy the Dummy and other characters in the new "Goosebumps: Horrorland" spin-off series. The books also include a chapter excerpt from one of the new "Goosebumps: Horrorland" books. WELCOME TO THE DEAD HOUSE features an excerpt from REVENGE OF THE LIVING DUMMY. WELCOME TO DEAD HOUSE is the first in the Goosebumps series. It is a bit darker and more horrifying than most of the other books in the original series and reads more like a water-downed version of R.L. Stine's Fear Street books. The book tells the story of Amanda and Josh, a brother and sister. The family inherits a house in Dark Falls and decide to make a new beginning in the new town. However, no one knows much about Dark Falls except that it's a very dark place and in the middle of nowhere. Amanda and Josh's parents are excited about the move, but the children aren't. When they visit the new home, Josh is sure he sees someone inside in an upstairs window. Then once the move is completed, strange things start to happen. Voices are heard and things in the house move around. No one walks the streets and no cars drive by. Dark Falls is a quiet place, but it's also a dead town, in more ways than one. Recommended for children in the 4th grade or older.

Moving into a new town can be hazardous

Published by Thriftbooks.com User , 17 years ago
RL Stine is one of the must read author while you are growing up. Focusing on horror genre, this book is the start of it all. I wasn't really interested in jumping on the RL Stine's wagon at first but after reading this, I changed my mind. Moving away from the home you've have been living in since you've been born is pretty hard. Worse, when you'd realized the house you're moving to looked creepy and mysterious, in the town that would make you feel like you're the only one alive there. Amanda was the one of the first, who noticed something else was not right in their new home, next to Petey, their family dog, who noticed things, actually people in this case, were not as normal as they seem. Next to hearing voices and giggles in her own room and experiencing apparitional appearances, Amanda and her brother Josh, managed to make some friends, but they were a bit queer with the way they keep looking at them. In the town itself, there's a cementary that would answer all the questions that came up since they've moved there.

THIS IS A LIVELY THRILLER WITH A DEADLY THEME

Published by Thriftbooks.com User , 19 years ago
Josh and Amanda move into a house that they don't want to move to.Their dog is acting strange when he sees people...dead people. Amanda keeps on seeing people she met in her house. when she walks over to them they dissapear. I enjoyed this book and if you like goosebumps you should by this one.

The Book that Started a Phenomenon

Published by Thriftbooks.com User , 21 years ago
R.L. Stine and his "Goosebumps" series were just starting to become popular with my classmates during the 1993-94 school year (sixth grade for me). Everybody was reading them and talking about how cool they were. That is, everyone except me. I remember thinking, "That stuff is so stupid. I can't believe anybody would read that kind of junk. I never will."Oh, how naive I was at such a young age.Curiosity killed this cat, and in the eight years since then, I still find the time to read these books. All 62 of them."Welcome to Dead House" is the one that started it all, and it is a classic, in this reviewer's opinion. This book is definitely darker in tone than some of his later books, and I really enjoyed it. This series was aimed at my age level (I was 12 at the time), and R.L. Stine hit the mark perfectly. He knew just what buttons to push to keep his readers reading.The thing that really enthralled me about this first book was how everything about Dark Falls (the town featured in the book) was so creepy. Amanda and Josh would take walks, and there would never be anyone around. No one mowing the lawn; no one walking the dog; not even a car would pass by. That is definitely something that would seem odd (and not to mention creepy) if there were real places like that.I loved all the references in this book to seeing kids in the house when they weren't really there, to seeing the gravestones and realizing that everyone is really dead, to the climax where Amanda and Josh are called on to save the day. R.L. Stine does a wonderful job of holding the suspense and moving the story along in his first outing.I'll always remember "Welcome to Dead House" as being a great story that was really creepy and fun to read. And I'll always remember how wrong I was about the entire series as a whole - "I can't believe anybody would read that kind of junk."Millions and millions of people around the world would tend to disagree.

Published by Thriftbooks.com User , 24 years ago
It's a great book,and if you like scary books you will sure like this one

Welcome to Dead House Mentions in Our Blog 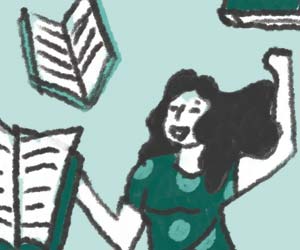 The Importance of Libraries
Published by Jamie Hurst • May 26, 2020
Right now, we know a lot of book lovers are missing their libraries. Today we are spotlighting some of the wonderful ways libraries can make memories.
Read Article
Trustpilot
Copyright © 2022 Thriftbooks.com Terms of Use | Privacy Policy | Do Not Sell My Personal Information | Cookie Preferences | Accessibility Statement
ThriftBooks® and the ThriftBooks® logo are registered trademarks of Thrift Books Global, LLC