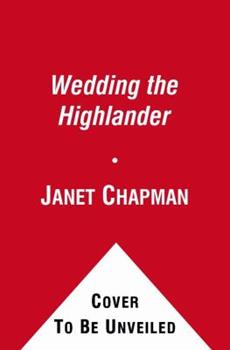 A runaway beauty finds love in the brawny arms of a handsome stranger...Talented surgeon Libby Hart is fleeing to Pine Creek, Maine, when her car spins out of control and crashes into a pond. She is rescued by Michael MacBain, a medieval highlander trapped in the modern world by a wizard's spell. Wounded in love once before by a modern woman, Michael wants nothing to do with Libby, but he can't resist the intense desire she stirs within him. Can this...

Published by Thriftbooks.com User , 16 years ago
Michael MacBain is a most unusual man. Born in 12th century Scotland, Michael and his men had been battling their enemies, the MacKeages, in the year 1200 when a wizard zapped them all into the modern world. Twelve years later, his fellow clansmen are dead, and Michael has moved to Maine and made peace with the MacKeages. Having already loved and lost two women, Michael is content to tend his Christmas tree farm and raise his son, Robbie. Young Robbie, however, has other plans. Determined to find a wife for his father (and a new mother for himself), Robbie decides to lease the house he inherited from his mother. Putting an ad up on the Internet, Robbie picks Libby Hart to be his tenant. Dr. Elizabeth Hart has to hide and hide fast. A trauma surgeon with a fast track career in Los Angeles, Elizabeth has just cured two patients with nothing more than a touch. Apparently, all those stories she heard as a child from her Grammy Bea about specially gifted women in their family was true. Unfortunately, Elizabeth knows that if the truth comes out her life will become a nightmare. Needing time and distance to sort out her life, Elizabeth changes her name to Libby and heads for Pine Creek, Maine and a new career as a glass jewelry designer. Coming to Maine feels like coming home to Libby, and she's instantly smitten with her new home and her young landlord, Robbie MacBain. But it is Robbie's incredibly infuriating, totally overwhelming, and absolutely gorgeous father who really rocks Libby's boat, and the feeling is mutual. Deciding to approach their libido in a rational fashion, Michael and Libby decide to have a no-strings-attached affair. Soon, that's not enough for either, but will their affair of the heart survive when secrets are revealed? WEDDING THE HIGHLANDER takes readers back to the lives of Janet Chapman's time traveling Scotsmen, and the result is sheer magic. With her loving attention to detail, Ms. Chapman brings Pine Creek and its denizens to life. The soul of this tale, however, is the relationship that blossoms between the hero and heroine. Surrounded by otherworldly elements, Libby and Michael are simply a man and a woman destined to be together, and some of their scenes together will leave readers starry-eyed. While this is the third book in the series, this story can stand on its own, and once a reader becomes caught up in the daily lives of the MacKeages, MacBains, and the ever-present wizard, Daar, it's a sure bet that reader will want to read the other books in this series ! TheSchemer

Published by Thriftbooks.com User , 18 years ago
I have thoroughly enjoyed the previous two books to this trilogy (or could it be a series?) but this latest entry, I must say, is simply OUTSTANDING! Not only is it a time travel, but the sensuality almost borders on the erotic and it just simply made me smile and sigh as it ran me through a roller coaster of emotions. To those of you who have not read the previous novels the author does a fine job of reiterating the main gist of the trilogy plot to bring you up to date - Basically, 800 years previously the wizard Daar in trying to send a certain highlander forward in time to meet his destiny (a woman who would bear him seven daughters, the last of which was to be Daar's apprentice) ended up sending eight highlanders, their war horses, and himself into modern day, Maine, USA. Did I mention that Daar, in spite of being 1500 years old was slightly incompetent! In this the third book of the trilogy, Libby, our modern day heroine doctor is fleeing from a hospital where she had found that she has the ability to `heal' - that is without modern day medicine. Frightened of the possibility, she runs as far from California as she can get into the backwoods and pristine beauty of Maine where she runs into a big beautiful `he-man' type, Michael MacBain, a medieval highlander trapped in the modern world with an eight year old son. Neither want the other to know their individual `secrets' and while they are attracted it is not spontaneous but builds beautifully into a very sensual and hot, romance - just yummy!A big part of the book is devoted to Robbie, the eight-year-old son of our hero, who is simply a delightful depiction of a precocious child that you want to hug! A little snippet from the book .... "Are ya Libby's mama? `Cause if ya are, I'll like ya, too." "Then I guess I am," her mother replied, her warm brown eyes dancing with amusement. "And you can call me Katherine." Robbie thought about that, studying her for a good long time. "I think I'll call ya GRAM Katie," he finally decided " `cause OLD people like it when I call them things like that." All in all, I can say I THOROUGHLY enjoyed this book - cover to cover. Fast paced, funny, sensual, sad, touching and I really do not want to see the end of this series! Please, please, I want to see what becomes of the seventh daughter when she apprentices to the wizard Daar! Lovers of this time travel genre should be sure to add this book to their buy lists - in fact the entire series should be enjoyed. If you like the writing of Lynn Kurland and Christina Skye's Draycott Abbey series you are sure to love this new author!

Published by Thriftbooks.com User , 18 years ago
This was the firest time that I've ever read Ms. Chapman, and I can hardly wait for the first two books in the series to come in the mail!!!!This book was very magical and it really was a new twist to time travel in the fact that so many travelled forward in time instead of back in time.The romance between Michael MacBain and Dr. Elizabeth Hart was magical, steamy, and fun. These were two characters that I really enjoyed reading about. Michael is a Christmas Tree farmer in in Maine. He is raising his son to not only respect the old traditions but the new traditions of his new home. He has been hurt before in love and is not willing to put his heart on the line again, that is until Libby comes crashing into his life. Dr. Elizabeth Hart (Libby) is a very talented trama surgeon but she experiences a very strange occurance in her operating room that sends her running to the opposite side of the country and smack into Michael MacBains prize Christmas trees. What happens from that moment on is two people not sure about themselves or their place in life, actually find that they have more in common then the other thinks. Libby can heal at will and Michael travelled 800 years into the future. They are perfect for each other!!!This was a very fast paced read. Probably due to the fact that I didn't want to put the book down even for a second. There is plenty of laughs and romance found on just about every page. No not sex scenes, romance the "falling in love" kind of romance. You won't be sorry that you picked this book up. You will be sorry though if you miss out on it.

What a fun read!

Published by Thriftbooks.com User , 18 years ago
You'll spend the day reading this delightful book. The first two books were OK, but this one is right on. Sexy and fun, I really didn't want it to end. Keeper shelf material.

Published by Thriftbooks.com User , 18 years ago
In Pine Creek, Maine, Michael MacBain owns and manages a Christmas tree farm. Living with him is his eight-year-old son Robbie and the former farm owner geriatric widow John Bigelow whose wife of almost six decades recently died.In Los Angeles, Cedars Sinai Medical Center trauma Dr. Elizabeth Hart suddenly performs two miracle healing acts and begins hearing the voices of patients in her head, pleading for help. Unable to cope, she responds to an Internet ad about renting a house. Robbie, who feels his dad needs a wife, placed the ad in the paper. On the drive to the remote area, Robbie's "pet" owl causes her car to crash. After hearing a series of jokes about being pint sized among these giants, Elizabeth and Michael fall in love. However, even though she loves the dude, she has to wonder about the sanity of a man who claims he was born eight centuries ago but was transferred to her time by a wizard. The latest twenty-first century medieval Highlander romance is an exciting tale starring two delightful protagonists and a strong support cast including previous lead characters. The story line is fun to follow as Michael and Elizabeth must cope with the matchmaking of his son and pregnant sister-in-law. Though in some ways the prime relationship is similar to those in previous novels in the series, Janet Chapman writes a refreshingly entertaining novel.Harriet Klausner
Trustpilot
Copyright © 2022 Thriftbooks.com Terms of Use | Privacy Policy | Do Not Sell My Personal Information | Accessibility Statement
ThriftBooks® and the ThriftBooks® logo are registered trademarks of Thrift Books Global, LLC