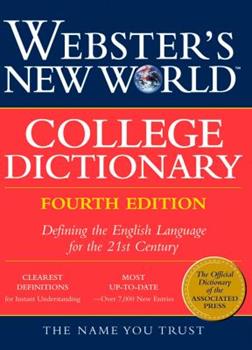 Ten years of lexicographic research culminates to form the latest edition of the renowned Webster's New World College Dictionary. This fourth edition combines the most up-to-date information about our... This description may be from another edition of this product.

Published by Thriftbooks.com User , 13 years ago
This is a fabulous dictionary for school, office, or home use. The large print is helpful for finding words and definitions. The size is large but not heavy in weight. There are most words commonly used found in conversation and literature. A great buy!

One of the best dictionaries that I've found

Published by Thriftbooks.com User , 15 years ago
This is one of the best dictionaries that I've found. The thing I really like about this dictionary is the word derevations. Most of the popular dictionaries these days have little or no information on where the word originated and what its original meaning is. Nice work Webster's New World Dictionary. I've been a fan for years. Keep up the good work.

Published by Thriftbooks.com User , 16 years ago
i'm surprised at some of the complaints. i've found this to be one of the best dictionaries i've ever had. i previously bought and returned the merriam-webster dictionary because a lot of its definitions seemed old-fashioned or ill-aimed. the vast majority of entries i've found have spot-on defn's; it's particularly good at describing modern, american usage (in fact its stated emphasis is on "americanisms"). it also has the best etymology i've found anywhere, listing the PIE origins of most words. nb the "pictures" that one reviewer complained about are a miniscule part of the space of the page; most pages have only one, and over 50% have none at all. many are actually maps or other useful diagrams (parts of a feather, a horse, the frame of a house, etc.).

Published by Thriftbooks.com User , 19 years ago
What a concept. Take all the known words in the English language, put them all in a book then describe what each word is, and then tell how to pronounce them! Who thought of such a concept? Apparently a person named Webster, that's who!The book starts and ends appropriately enough with the words "a" (described as "the first letter of the English alphabet) and zymurgy (which is the chemistry of fermentation). And between those two words you'll find descriptions of words whose meanings range from "a vague notion" to "to shrink by a special process in manufacture", and so forth.Between "a" and zymurgy are fabulous descriptions of words that will amaze you every single time! Guaranteed!You think your spell check made by Mr. Gates is up to this challenge? "-pede" isn't in the word spell check I have!!! How are we supposed to combine the form of foot or feet without it, Mr. Gates? It seems Mr. Gates mind is made of two many "1's" and "0's", and not enough centipedes!Also included in this wondrous, unique book is a description of the abbreviations used in this dictionary (how else are you going to decipher "Norw" or "m" without it) and other wondrous subjects. So if you need a word, and Mr. Gates neglected to place it in his word check, this book is highly recommended for you. Frequently used in my house, where we have centipedes aplenty!

Published by Thriftbooks.com User , 19 years ago
I tutor students of all ages and always recommend this dictionary. Some dictionaries discourage students, but this one has larger print, omits the word histories, and provides a sentence for each use of the word.
Copyright © 2022 Thriftbooks.com Terms of Use | Privacy Policy | Do Not Sell My Personal Information | Accessibility Statement
ThriftBooks® and the ThriftBooks® logo are registered trademarks of Thrift Books Global, LLC