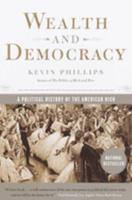 Wealth and Democracy: A Political History of the American Rich

For more than thirty years, Kevin Phillips' insight into American politics and economics has helped to make history as well as record it. His bestselling books, including The Emerging Republican Majority (1969) and The Politics of Rich and Poor (1990), have influenced presidential campaigns and changed the way America sees itself. Widely acknowledging Phillips as one of the nation's most perceptive thinkers, reviewers have called him a latter-day...

Published by Thriftbooks.com User , 18 years ago
It is hard to imagine someone who has a better grasp of the issues related to the implications of economic policy and overall economic health than Kevin Phillips. From "The Politics of Rich and Poor" onwards, Phillips continues to distinguish himself both with regard to the breadth of his knowledge and his ability to avoid falling into either "right wing" or "left wing" ideologies. "Wealth and Democracy" is thoroughly researched, carefully presented, and the implications of the trends he analyzes are "musts" for anyone who wants to get their "arms around" this complex of issues. The main thesis of this book is that repeated economic cycles have demonstrated that as wealth concentrations grow (the amount of wealth held by few families/persons), democracy suffers as the political landscape becomes increasingly skewed by those concentrations of wealth. (To suggest, for example, that Phillips is "anti-well-to-do" would be a gross over-exaggeration that largely misses the point.) One could easily expect a book with so many charts, graphes, and other analytic tools to be boring or hard to follow, but Phillips keeps one's attention from beginning to end with a serious, yet entertaining style. Frankly, one can only wish our contemporary policy makers had half Phillips' grasp of economic policy implications. Whatever criticisms one might have of Phillips' work in general, his works are always remarkably well researched, and "Wealth and Democracy" is no exception to that general observation. It will take some concentration to follow all the details of "Wealth and Democracy," but the time necessary to avoid a "thin" understanding of the material will be well worth the effort. While, say, a book of anecdotes (perhaps like "The Lexus and the Olive Branch"), or books about "get rich quick" schemes might be easier to follow, they do not begin to compare to the analytical nature of Phillips' work, and the rewards would be nowhere near as great. If one is determined to bring "laissez faire" presuppositions to the reading of this book, one might prefer to avoid "Wealth and Democracy" as it will be difficult to maintain both those presuppositions and one's integrity in light of Phillips' thorough analysis.

Published by Thriftbooks.com User , 18 years ago
Kevin Phillips book, for all the wrath it seems to inspire in these reader reviews, is actually a tremendously sensible and well-supported book, without any alarmism, or any of the bitterness or class-warfare that might hurt his argument. In fact, Phillips gives one of the best explanations for why class warfare has never worked in America--beyond the simplistic Horatio Alger myths. In short, Phillips is not attacking the system, so much as showing its current predicament, and describing how America has faced such challenges before. If anything, much of his information is comforting, in that it shows seasonal shifts in America's distribution of wealth.True, Phillips does suggest that the current plutocracy in America is similar to that which occurred in England, Holland, and the Spanish Hapsburg Empire during their eras of decline, but he stops well short of predicting the same fall from exceptionalism for America. Rather, WEALTH AND DEMOCRACY is a cautionary tale, one written with admiration and affection for the American system, not with scorn. He is a Republican who dislikes Republican free-market utopianism as much as the Democrats' social-program utopianism; and this is a refreshing approach.Phillips is just the sort of social and economic critic America needs in a time when most books of this kind seem polarized--either with Howard Zinn and Michael Moore, or Catherine Coulter and Bill O'Reilly. What results is a wonderfully sober book--a political history of America that seems virtually untainted by politics.

Published by Thriftbooks.com User , 19 years ago
From the June 10, 2002, _Business Week_, clearly not a bastion of liberal propaganda, comes a glowing review of this book:Kevin Phillips is most often identified in the press as a "Republican strategist" since he once had a consulting and polling firm near Washington. But he's hardly just another GOP spinmeister. In fact, Phillips is a thoughtful analyst and historian. And he gives most card-carrying Republicans severe heartburn by focusing on the "popular resentments" of America's beleaguered middle class and the dangers the party faces by ignoring discontent. To conservative members of the party, Phillips is just fanning the flames of a class warfare which, conventional wisdom holds, will never have much appeal for Americans. Phillips' latest book, his ninth and most ambitious, may finally drive his conservative critics mad, but it can't easily be dismissed. ...

Wealth and Democracy in America

Published by Thriftbooks.com User , 19 years ago
Though it is not an easy read, Wealth and Democracy in American is a thoroughly researched book which paints a compelling picture of two tendancies in American history: one democratic embodied by both Roosevelts, Jackson Wilson et al. and the Free Marketeers (market worshippers) whose focus seems to lead to the financialization of the real economy. This financialization was rampant during periods wild speculation followed by economic collapse typified by the robber barrons and the 1870s collapse and the era of Coolidge, Harding and Hoover during the 1920s and the collapse of the 1930s. For anyone intersted in the financial mess we are in today and the emergance of plutacracy, a government in and for the rich, this is a must reading. It clearly places the deregulation mania which intensified under the Reagan Revolution and the worship of free markets as aparty to the disturbing distortion of income distribution. He shows that today the rich are about as rich as they have ever been here (perhaps with the exception of the 1890s) and the poor and middle class are stagnant or slipping in their standard of living. For any American concerned about where this country is going under the ideology of all out free market theory, this book will be both informative and downright frightening. It is also worth noting that the author was a key strategist under Richard Nixon who predicted the takeover of the Replublican party by the neo-conserviative idelogists in the 1970s. Finally, the author domonstrates that the U.S. is going the way of three other large empires who succombed to greed and financialization, Britain, Netherlands and Hapsburg Spain. I would strongly recommend it to any reader with a determination to learn the historical basis of the hideous economic demise this country has seen since the 1990s speculative bubble burst (a symptom of this gross financialization of the U.S. economy). This has been coupled with the outflow of real productive capacity ironically to a Communist country or the selling of U.S. manufacturing and other enterprises to foreign interests in the name of multinationalism. The greed ridden disease permeating U.S. business and politics is very well diagnosed by Mr. Phillips. He writes with depth and style. Read it. It will make anyone who loves this country very angry.

Published by Thriftbooks.com User , 19 years ago
I am currently about 300 pages into this book, and I must say I pick it back up whenever I get a chance. This is an incredibly educational read, and of course I take everything with a grain of salt. I am conservative politically, so I find the evidence of business demands for laissez-faire combined with enormous government influence troubling and irrefutable. I myself have no doubt that business interests pretty much control the government's actions, for better of worse. I don't think this needs to be confused with a conservative agenda - it is the agenda of whatever entity is doing the influencing. I find many of the other reviews of this book laughable. Read other books instead - what books? Disapproval of a work like this is obviously dismissing it outright because of personal political beliefs. Fine, but what are the counter arguments? Does self rightous indignation not need an explanation anymore? While I can't claim to have enough of a point of reference to judge Mr. Phillips opinion one way or the other, I am greatly appreciative to be able to read such an erudite and well researched work.
Copyright © 2022 Thriftbooks.com Terms of Use | Privacy Policy | Do Not Sell My Personal Information | Accessibility Statement
ThriftBooks® and the ThriftBooks® logo are registered trademarks of Thrift Books Global, LLC