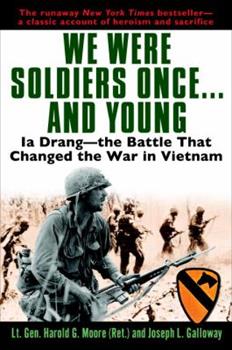 We Were Soldiers Once...and Young: Ia Drang - The Battle That Changed the War in Vietnam

(Book #1 in the We Soldiers Series)

Each year, the Commandant of the U.S. Marine Corps selects one book that he believes is both relevant and timeless for reading by all Marines. The Commandant's choice for 1993 was We Were Soldiers Once . . . and Young. In November 1965, some 450 men of the 1st Battalion, 7th Cavalry, under the command of Lt. Col. Hal Moore, were dropped by helicopter into a small clearing in the Ia Drang Valley. They were immediately surrounded by 2,000 North Vietnamese...

Published by Thriftbooks.com User , 3 years ago
My Step Father, Xavier Sagui, was one of the few who survived. He, along with others who came home gave their story. They never accepted any money towards this book but instead, insisted in giving all proceeds to the families who lost their family in this war.

Published by Thriftbooks.com User , 15 years ago
Battles achieve legendary status - however as modern times proceed, we don't hold the same reverence that we do to those battles from the time of Napolean to Gettysburg to Normady. This battle is on the same grounds and deserves the same reverence of how war was fought. Every military history buff and military strategist must read this account.

Bringing Order to a Chaotic Battle

Published by Thriftbooks.com User , 16 years ago
This book does an excellent job of describing two chaotic battles in a very organized fashion. The authors are well acquainted with the subject matter as they both lived through the events described in the book. Harold Moore was the Commanding Officer of 1st Battalion, 7th Cavalry. Joseph Galloway was a reporter for United Press International. The authors also did a lot of homework. The "Acknowledgments" section indicated that they spent ten years doing research for this book. The clarity with which the book is written indicates that this time was well spent. In addition to conducting extensive research in the U.S., they also traveled to Vietnam and interviewed several of the North Vietnamese leaders who fought against them. This research allowed them to describe the battles from both sides. The first part of the book describes the Battle of LZ X-Ray. The early stages of this battle were very chaotic. The authors, however, were able to clearly describe the events in a chronological and easy to understand manner. This process is then repeated for the Battle of LZ Albany. The end result is an easy read. This book is also an excellent supplement for anyone who watched the Mel Gibson movie. Events in the movie are sometimes confusing. This book does an excellent job of clarifying many of the troop movements. The maps alone are invaluable in describing how the battles unfolded. Bottom line: although this is a factually accurate history book, it reads like an adventure novel. Any reader will clearly see why it was selected by the Commandant of the Marine Corps as his choice book for 1993.

Published by Thriftbooks.com User , 17 years ago
I saw the movie & thought I would give the book a whirl. This book is extremely well written & frighteningly real. It not only looks at this infamous battle in extaordinary detail but gives the reader an idea of what went on "back home" perhaps from the perspective of the families of the soldiers who fought in the Ia Drang Valley in November 1965. Also included is a small glimpse of some of the political decisions that were made at the time & the consequences of those decisions. This is an excellent read. UNPUTDOWNABLE

Published by Thriftbooks.com User , 21 years ago
This ran in Army Times. In addition to being one of the under-reported stories of 9-11, it seems like a remarkable footnote to a remarkable book.`The bravest man I ever knew' After a lifetime in which he cheated it many times, death caught up with Rick Rescorla halfway up the south tower of the World Trade Center.But like a good soldier, he didn't sell his life cheaply. Death took him only after he had cheated it again, helping to save 2,700 lives by relying on the instincts and the preparation that had served him well in battles on two continents.Rescorla was a retired Army Reserve colonel and the head of security for Morgan Stanley's Individual Investor Group at the World Trade Center. But many readers will be more familiar with him as Lt. Rick "Hard Core" Rescorla, one of the heroes of the 1965 battle of the Ia Drang Valley in Vietnam."Rick was the best combat leader I ever saw in Vietnam," said Pat Payne, the 2nd Battalion, 7th Cavalry Regiment's reconnaissance platoon leader in Ia Drang.Featured in bookRescorla's role in that battle is recounted in detail in the book "We Were Soldiers Once... And Young," a searing account of the action by retired Lt. Gen. Harold "Hal" Moore and Joe Galloway. In 1965, Moore was a battalion commander in the center of the battle, and Galloway was a UPI reporter who covered the entire engagement.Even those only vaguely familiar with the book have seen Rescorla's image - he is the gaunt soldier on the cover with the 2-day old beard and the bayonet fixed to his M16.When Rescorla showed up for Basic Training at Benning in 1963, he'd already seen more adventure than most soldiers do in a lifetime. Born in Cornwall, England, he joined the British army's Paratroop Regiment as a teen-ager, then became a military intelligence warrant officer. He served in that position in Cyprus during the violence that wracked that island in the 1950s, then left the British Army for a London police job in Scotland Yard's famous "Flying Squad" of detectives.He left England for another military job, this time as a commando in the Rhodesian Colonial security force in Africa. From there he came to seek his fortune in the United States. After breezing through basic training, Rescorla was picked up for Officer Candidate School. Last year he was inducted into the OCS Hall of Fame.He graduated as a second lieutenant in 1965, just in time to ship out to Vietnam with the 1st Air Cavalry Division. In November of that year, still a British citizen, he would draw on all his youthful experience in the battle of the Ia Drang.Headed the `Hard Corps'Ia Drang was the Army's first major battle in Vietnam, and one of its bloodiest. The battle claimed 305 American lives, soldiers who died in fierce combat with a North Vietnamese regiment that also took heavy losses. Rescorla commanded 1st Platoon, B Company, 2nd Battalion, 7th Cavalry Regiment, and was almost worshipped by his soldiers, who called themselves the "Hard Corps" after his nickname. But his cou
Trustpilot
Copyright © 2022 Thriftbooks.com Terms of Use | Privacy Policy | Do Not Sell or Share My Personal Information | Accessibility Statement
ThriftBooks® and the ThriftBooks® logo are registered trademarks of Thrift Books Global, LLC