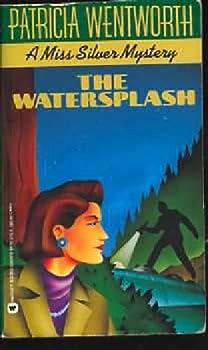 This description may be from another edition of this product. To the innocent visitor the picturesque village of Greenings would appear to be a haven of tranquility. But every place has its secrets and beneath the calm surface lurk hidden resentments and...

Published by Thriftbooks.com User , 16 years ago
Miss Silver finds herself in the midst of quite a vicious little village when she visits an old friend's daughter in Greenings. There has been murder done, and blackmail, as well as lots of village gossip. Miss Silver follows her nose and the gossip to uncover a particularly vicious killer. Ms. Wentworth has done an admirable job here in portraying English Village life. It's gossip that makes the world go round in this setting, and Miss Silver is not above gathering up the gossip in order to discover who has committed murder most foul. This is a very good village mystery and it is a little darker than most of Miss Silver's efforts.

The Prodigal Son creates a crisis

Published by Thriftbooks.com User , 17 years ago
When Edward returns when his family thought he was dead, there is rampant speculation on where he has been. When Edward refuses to tell anyone where he had been, the talk is that he was in trouble, maybe even jail. His uncle Arnold has inherited a large estate bcause James Random thought Edward was dead. But Clarice, his nurse, knows that there was another will, one that benefits Edward. She knows James Random had a dream that Edward is alive. Clarice wants Edward, so she keeps the information to herself hoping to use it to snare Edward into romantic gratitude. But then one of the witnesses to the will is killed in the watersplash and Clarice is nervous. Providence brings in Miss Silver and Clarice is warned not to use any information for personal gain. She does not listen and is found dead in the watersplash. The solution to the mystery is another twist and very unexpected. The love story between the bitter Edward and Susan is a pleasure to read.

Suspicious will followed by blackmail - and drownings

Published by Thriftbooks.com User , 18 years ago
A watersplash is a shallow ford in a stream.- author's noteThis case follows the Rejected Client Variation of the classical Silver format: after a few chapters of character development, an unsympathetic character - here Clarice Dean - consults private inquiry agent Maud Silver, who refuses the case. Clarice, a freelance nurse, has deliberately arranged a return to the village of Greenings, seeking some kind of opportunity, but what? Is she interested in committing matrimony with one of the Random family - or blackmail? Maud Silver at least considers the latter possibility, warning Clarice against its dangers - a warning that other characters could take to heart.Five years ago, Edward Random fell for Verona Grey, but the affair ended in an epic quarrel with Edward's uncle James, followed by Edward's stormy departure and stony silence - no visits, no communication. Eventually news came of Edward's death, although James wouldn't tell even Edward's beloved stepmother Emmeline the details. The family won't say whether James removed Edward from his will after the quarrel or only after Edward's "death". James, as the eldest of three brothers, had the family estate and a decent amount of money; Arnold, the youngest at sixty-odd, also had a comfortable slice of the family pie. Only Edward's ne'er-do-well father was penniless - there's just enough for Emmeline to live on, since James let her live rent-free in the Hall's south lodge.But the village hums with gossip now thatEdward has returned; Arnold shows no signs whatever of re-dividing the family pile, and Edward doesn't see fit to say where he was or what he was doing. Edward's long absence gives Wentworth a natural opening for introducing us to the cast - he meets Susan Wayne by chance at the train station, and since she's going to be cataloging the Hall's library, she asks him to fill her in on the situation so she won't say the wrong thing. They're friends - she had a crush on him when he left, and she's still close to Emmeline.Lord Burlingham, the next nearest big landowner, is no friend of Arnold's; he offers Edward an estate management job. Arnold reacts by threatening to evict Emmeline. Wentworth's usually skilled character development shines here. For instance, Arnold *tries* to threaten his sister-in-law with cold dignity, but he can't maintain it in the face of Emmeline's clear perception of his motives, and embarrasses himself by losing control. Lord Burlingham, far from being from old money, is self-made, and there's a distinct impression that he was granted his title because the powers-that-be in the House of Commons felt he'd better take his outspokenness elsewhere. He's sharp - when he wants to quash the gossip about where Edward was, he walks right up to Emmeline in the fish queue and congratulates her in a carrying voice on Edward's new job. :)Although Clarice gave Maud Silver a false name, she gave enough information that as an exercise, Maud writes to an old friend - Ruth Ball, the wi

The cry of the blackmailer is heard in an English village.

Published by Thriftbooks.com User , 21 years ago
Miss Silver always gives good advice--and afterwards, she has as consolation that she did try to help. "Don't blackmail murderers," is one of her prime mottoes. But no one ever listens, thank goodness, and we get another story of murder, young love, and village characters.
Copyright © 2020 Thriftbooks.com Terms of Use | Privacy Policy | Do Not Sell My Personal Information | Accessibility Statement
ThriftBooks® and the ThriftBooks® logo are registered trademarks of Thrift Books Global, LLC