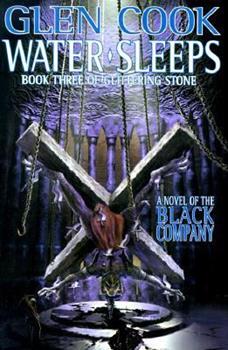 The epic of warfare between sorcerers and demigods is told from the "worm's-eye" view of the soldiers who fight for them--the climax of Cook's modern masterpiece of military fantasy.

My Favorite Novel in the Series

Published by Thriftbooks.com User , 21 years ago
Water Sleeps is easily my favorite Black Company novel, but for what may be an unusual reason: I really like the character of Sleepy! Glen Cook has generally had a tradition of including strong female characters in his novels -- the Lady, the White Rose, Soulcatcher, Sahra, the Daughter of Night, etc. However, most of them (exceptions: the Radisha and maybe the White Rose) were somewhat stereotyped in that they were seductresses, impossibly (unrealistically, were it not for sorcery in several cases) beautiful women.None of that is true for Sleepy. An aging, celibate career transvestite who makes a living as a deadly tactician? What's not to like? I think Glen Cook has finally created a female character I can identify with -- someone who trades on ability rather than a habit of manipulating men sexually to get what she wants.In the real world, most women are not Ally McBeal/Britney Spears/Seven of Nine/any of the highly cosmetically or surgically altered fashion plates the media spews at us every day. Many of us would not want to be! Historically, a number of female movers-and-shakers have not been unnaturally beautiful. It's nice to see a character in the series who finally reflects this.

Published by Thriftbooks.com User , 21 years ago
A friend got me started on Black Company, although I had already been reading the Garrett series. I had begun to lose interest in the Black Company, but this book brought it back! I've been recommending it to all my friends, and have already ordered a copy of the next one (release August 2000. Hardback but I'm hooked again).

Published by Thriftbooks.com User , 21 years ago
This book is the best one in the series! As the style of writing changes from one Annalist to another, I become more and more impressed with Cook's work. Water Sleeps is a must buy. I am already eagerly awaing the next in the series! This truly shows that the series chronicles The Black Company, not just a few selected characters. Excellent.

Is there a better series of novels with heroes this nasty?

Published by Thriftbooks.com User , 22 years ago
I am always surprised when a new Glen Cook novel hits the stands. Outside of the success of his "Garrett" novels (which are a lovely blend of Raymond Chandler meets J.R.R.), he has to be the most overlooked writer in the fantasy genre. His "Dread Empire" series of novels (of which there were seven (7) published) combined political machinations with big-time wizardry, meddling immortals and believable ordinary characters (with ordinary flaws) into a grand mesh set on a world scale. He had planned at least two more novels in the series but poor sales forced its "retirement". Let us all hope that this does not happen with The Black Company. My greatest fear is that the latest book will be the last and the story will not yet be finished. Water Sleeps is another example of Glen's gritty storytelling at his best! Best of all, there is room for more novels with the hooks and unanswered questions that he leaves us with! The presence of Croaker and Lady (or lack of presence would better describe it) is the one thread that has bound the entire series together. Having them restored will allow Mr. Cook to tantilize us with further tales - should enough people purchase the novels - and also allow for the development of the newest wizard in the group - Murgen's son. Write on.

Published by Thriftbooks.com User , 22 years ago
For 20 years I've read Glen's work, dating back to A Shadow Of All Night Falling, the first Dread Empire book (a series as good as this, but long out of print and expensive to find). The Black Company was the first series besides Moorcock's Elric to depict a less-than-pleasant set of heroes, and Cook took it to the extreme.Yet, the Black Company are friends. Old friends, and their story has always been compelling, even when mired as if in the delta of the river Taglios sits astride. A good friend recently likened the new book to a river journey down the delta, with the tale wending to and fro, and he was dead-on.Simply put, I'm glad Glen is back with the company, and I eagerly await "Soldiers Live (And Wonder Why," the next chapter of the annals.Now if only we can get him to write a new Dread Empire...Bragi's been away too long.
Copyright © 2020 Thriftbooks.com Terms of Use | Privacy Policy | Do Not Sell My Personal Information | Accessibility Statement
ThriftBooks® and the ThriftBooks® logo are registered trademarks of Thrift Books Global, LLC