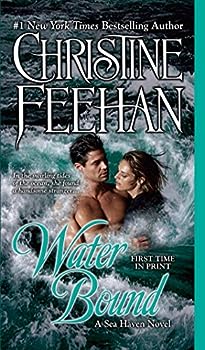 (Book #1 in the Sea Haven/Sisters of the Heart Series)

This description may be from another edition of this product. Return to Sea Haven in the first novel in #1 New York Times bestselling author Christine Feehan's Sisters of the Heart series, as a diver and the man she rescues are engulfed in a storm of dangerous...

Published by Thriftbooks.com User , 11 years ago
very different hero and heroine. Love the new twists and focus on personalities. Still has plenty of action regardless of what others say. only wish the firestarter background was more relevant and detailed...kind of just through in a possible tie in at the end

Good Set Up For New Series

Published by Thriftbooks.com User , 11 years ago
As the first book in a new series Water Bound works well for me. I really enjoyed the interaction between Lev and Rikki, two very unique characters that were perfect for each other. The insights into how Rikki's mind worked and why were fascinating to me. If I wished for more of that interaction between the two instead of the other details that set up the new series I guess that's normal for the first book in a series. In the end it was a good story, with none of the gruesome violence CF can sometimes throw in. I'm looking forward to the rest of the "sisters" stories.

Published by Thriftbooks.com User , 11 years ago
This was a very good read. I am always looking for something different. The heroine here is a very high functioning autistic. Plus she has a magical power. The hero was briefly in the book about Elle in the Drake sisters series. He is the brother of Ilya who is married to Joley. He is one of seven brothers who all also have some sort of powers. He seemed to be more damaged than Ilya. But once he discovers Rikki he leaves his old life behind and never looks back. He does a very good job coping with someone who is different. You know that he will continue to do everything he can to make her life easy. I loved the way he loved her. She is very well written. I'm sure it might have been easy to make her a stereotype. You could see her OCD/autism but you could see how she learned to function around it. She was a flawed yet very strong character. I enjoyed reading about her. Here and there the writing was a bit heavy handed when the author kept mentioning for example that she had no people skills. Once would have done it with some follow up showing scenes. But that is a pretty minor quibble. There were 3 rather lengthly love scenes that for me held up the action. They weren't bad or anything but I guess I was so interested in the story that they dragged the pace down. This one avoided the overly sweet feeling that some of the Drake books gave me. I really enjoyed it.

An atypical heroine and a fierce alpha hero

Published by Thriftbooks.com User , 11 years ago
Water Bound (A Sea Haven Novel) by Christine Feehan Paranormal Romance- July 27, 2010 5 stars Water Bound is a spellbinding romance that will sweep you away and never let you go! I was mesmerized by the beauty and moving romance in this new paranormal series set in the same world as the Drake sisters' series. Rikki has a talent for water. It soothes and comforts her and she is able to manipulate it. But Rikki is troubled. Her parents were murdered and disaster after disaster has followed her since their death. She has finally found a small place where she can find peace with a band of adopted sisters who have their own special brand of magic. When she decides to go out to a dangerous part of the ocean to hunt for the precious sea urchins that support her living a freak disaster causes the water to nearly kill her. But in the water she finds another human set adrift, a man who draws her. She saves him and instantly regrets it. Although he is handsome and magnetic she realizes he carries secrets and they will disrupt the hard earned serenity she has finally found. But for some reason she is unable to abandon him. Lev Prakenskii is a man without a past or an identity. He has killed, lied and seduced for his country. A country that feels he is expendable. But since he was violently taken from his family and indoctrinated by the Soviet government he has no other purpose. That is until he meets the courageous and eccentric Rikki. She draws him and only with her does he feel human. Lev knows Rikki is his only chance at humanity and he wants to stay and love her. But his government is set to exterminate him and an evil from Rikki's past threatens to tear them apart. This was a highly emotional and poignant story. This book was unusual in that while Rikki was attracted to Lev she really did want to get rid of him since his presence disrupted her own mental health. He is a complication she doesn't need or want. But Lev immediately realizes a good thing when he sees it and although Rikki has many quirks only he sees the true woman who can accept him when he cannot. Rikki is his salvation. Reading how such a fierce alpha male is determined to be gentle and strong enough to fight for their relationship was very moving. As Christine Feehan explores their love I really felt I knew each of these individuals and I became so invested in each of them that I craved for them to be together. These characters were intensely 3 dimensional. I really got the feeling that they were the only ones who could truly understand each other. In addition, the author seamlessly adds touches of her Drake series by introducing beloved characters which adds a feeling of coming home that devoted readers will be sure to embrace. This is a book to cherish. I loved this story and only regret I read it so fast that I didn't get to savor it more! I only hope her future books will have more mesmerizing Prakenskii brothers featured! Reviewed by Steph from the Bookaholics Romance
Copyright © 2020 Thriftbooks.com Terms of Use | Privacy Policy | Do Not Sell My Personal Information | Accessibility Statement
ThriftBooks® and the ThriftBooks® logo are registered trademarks of Thrift Books Global, LLC