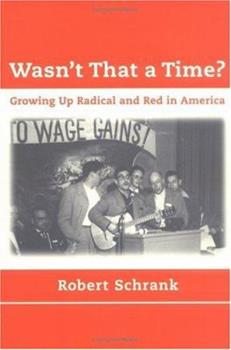 Wasn't That a Time? Growing Up Radical and Red in America

The compelling autobiography of Robert Schrank recounts a life of empathy, principles, and activism. "I was born two weeks before the Bolshevik Revolution into an immigrant family that was part of New York's large German socialist community." So begins Robert Schrank's compelling autobiography. In a down-to-earth, anecdotal style, he recounts a life rare in the breadth of its experience and the depth of its transformations. From Young Communist League...

One of the best memoirs of working America you'll read

Published by Thriftbooks.com User , 16 years ago
If you're young and your family has a working class history this is a book you should read. We live in an economy so far removed from the blue collar battles of yesterday that it's hard for young people to imagine what it was like. Robert Schrank's marvelous memoir, Wasn't That A Time, explains much about a nearly forgotten past. I mean, who talks about coal strikes and mine strikes and union organizers today? The workingman's history fades into the past faster than you can say "Your retirement fund is bankrupt." Mr. Schrank's recall about the many people and events in his life is aided by his FBI file which he requested via the FOIA. I must admit, I found it hilarious that he used the file to fact check his own memory. When life gives you lemons . . . This is an excellent book on an aspect of American history that is usually presented in dull, lifeless prose. Mr. Schrank's book, however, is so stimulating that I took it to the beach! If you read one book on the struggles of blue collar Americans and the union movement, this is it. It made me pround to be an ex-steelworker and son of labor.

The fullness of a life on the Left

Published by Thriftbooks.com User , 21 years ago
Robert Schrank is one of those protean men who seems to have done, or been, most of what was worth doing or being (and a lot that wasn't) in the 20th Century. Now in his 80s, he can look back on a life that included (among other things)being several kinds of blue collar worker, a member of the Communist Party, a nationally known union leader noted both for effectiveness and honesty, a plant manager, head of an innovative urban youth program, a new York City Commissioner for job training, a late-in-life Ph.D. in sociology, a foundation program officer, a consultant (including to the World Bank), a magnate for special and handsome women, a singer of songs, and a great storyteller.In this book, Schrank does the latter about much, though not all, of the former. There may be another book in Schrank, but this one is the story of one of those people born early in the century who committed themselves fully to the challenge of making social and economic life better for working people and the poor. It was a time when the varieties of the Left--unions, socialism, communism, and all the rest--were a vibrant reaction to the excessess and harshness of late 19th and early 20th century capitalism in America and elsewhere. Now, at a time when the Left is exhausted and a nostalgic memory, it may be hard to envision when people not only cared deeply about such issues and movements, but lived lives enmeshed in them. If you were young to middle-aged at the opening and into the middle of the last century and cared about such things, the Left was the place to be.And that's what Schrank writes, or rather, tells stories about. It is a personal memoire about being the son of a Wobbly, a street leader of protests, a young unionist, and a communist. The adventures are sometimes hilarious, sometimes poignant as Schrank rose to leadership in many of the things he experienced. Along the way, be became disillusioned with the curruption of unions, which he fought fiercely, and with the duplicity and failures of socialism and communism. This led to depression and psychiatry and an epiphany of sorts--and to a switching of gears, and sides. Schrank got a set of mid-life college degrees, served a stint as a successful manufacturing plant manager, and emersed himself in the governmental and foundation social programs of the Sixties and later.It is a fascinating story, warmly told, without self-pity or bitterness, with great humor, and with the kind of understanding and tolerance that only one who has seen much more than most people of what life can offer can bring to bear. It's a great read, the kind of book you give to friends.
Copyright © 2022 Thriftbooks.com Terms of Use | Privacy Policy | Do Not Sell My Personal Information | Accessibility Statement
ThriftBooks® and the ThriftBooks® logo are registered trademarks of Thrift Books Global, LLC