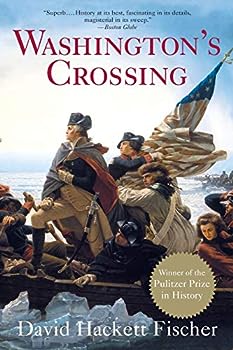 Six months after the Declaration of Independence, the American Revolution was all but lost. A powerful British force had routed the Americans at New York, occupied three colonies, and advanced within... This description may be from another edition of this product.

Published by Thriftbooks.com User , 18 years ago
A monumental tome, "Washington's Crossing" provides an extensive and thorough examination of the people and events leading up to and surrounding the crossing of the Delaware River as well as the results of the successful New Jersey campaign of which this was one small part. For those who are serious historians and wish to check primary sources or other information the author provides documentation in the form of 45 pages of appendices, 33 pages of histography, a 27 page bibliography, and 56 pages of notes. For those less inclined to study at that level the easy-to-read style of David Fischer makes the book a great read. He closely examines the makeup of the various military units including the Hessian regiments, British regulars, Scottish Highland regiments, Connecticut Light Horse regiment, Hamilton's Artillery, regiments of riflemen, etc. He also examines the background and history of Washington, the Howe brothers, Cornwallis, and many other major players in the war. After reading "Washington's Crossing" you come away with a deeper understanding and appreciation for what the American and British forces went through and what each was trying to accomplish at various stages of the war. This was a critical time for the American militia and David Fischer drives the point home well as he takes you through one unsuccessful campaign after another until the tide finally turned for the American troops. Each side is carefully examined in terms of fatigue, moral, military planning. What happened, why it happened and the effect it had on the war at that point. A fascinating trip into history it is an excellent read and highly recommended.

A provocative, complex book, done a disservice by its title

Published by Thriftbooks.com User , 18 years ago
David Hackett Fischer's latest ode to the American Revolution extends far beyond the limitations in scope and time implied by its title. And it is hardly the over-simplification you might fear when reading in the Editor's Note that "no single day in history was more decisive for the creation of the United States than Christmas 1776." It is difficult to sum up a book that treats of so many events, topics, and themes, but I saw it primarily as a military history of the Revolution's opening act, covering the one year period beginning mid-March of 1776. The Crossing of the title could not even be termed the centerpiece of the account. After the Introduction, it is not mentioned again until p. 203, and then occupies only about 13 of the main text's 370-odd pages. We learn first - in detail - of the recruitment and make-up of the opposing armies (with the British and Hessian contingents treated separately), the backgrounds of their principal commanders, of the competing strategies that each side considered and the differing processes of choosing from them, and then of the campaigns that ensued. The Americans chose to defend New York City, are routed, and then are chased across New Jersey and into Philadelphia. Then the decision to mount an attack back across the Delaware River at Trenton is made. The Americans succeed, repulse a counterattack, and follow-up with a march north against the enemy encampment at Princeton. After this third American success, the wearied armies withdraw into their winter quarters. Many "crossings" are documented, many as perilous and significant as that of the title. They just don't have famous paintings to heroicize them. When covering the troop make-up and the like, Fischer's detail can be mind-numbing. But when writing of the battles themselves, he excels. A three-hour made-for-TV movie could not equal in drama the force of Fischer's one paragraph describing the moment the Hessian outpost commander realized the dimensions of the American force advancing on Trenton.Embedded in these discussions is the informed development of what I see to be Fischer's two main, interlocking themes. The first is the tension in the American forces between the need for military discipline and the belief among the troops that liberty was a "voluntary agreement." The second is Gen. Washington's evolving skills as a commander and strategist. These and other "lessons to be learned" from the events are then explicitly laid out in a concluding Chapter. Well, hardly "concluding". Following are 24 Appendices dealing mostly with subsidiary military topics (duty rosters, casualty lists, etc.) that will be of interest mainly to those whose ancestors served in the fighting. Then come a Historiography, Bibliography, Abbreviations, Notes, Sources for Maps, Acknowledgements, and the comprehensive Index. This book is nothing if not well-documented.At the risk of making this review far too lengthy, I must add that the maps are brilliantly executed - frequent,

Published by Thriftbooks.com User , 18 years ago
There are a number of authors whose books you pick up to read despite the purported subject matter. David Hackett Fischer is one of those authors. Having read Albion's Seed, which I thought was a truly outstanding book, I was not thrilled to see that he had written a book titled Paul Revere's Ride. What could someone have to say that would make this overworked piece of historical minutia worth reading? Wrong! Hiding behind the bland title was another gem about colonial American culture. All this is background to explain why I wasn't surprised by Washington's Crossing. Once again, he has produced an amazingly informative and well-written book book and disguised it with a pablum title. I thought I knew this part of Revolutionary history very well. However, Washington's Crossing not only brought out details about Trenton and Princeton that I had never known before, it presented a lot of very germane background material that I had never seen before, and most importantly, it explained why these were really significant engagements. They were not minor skirmishes, or as one historian had described them "Washington beating up Howe's outposts". True, the numbers of men involved were small, but then so were the armies, and for that matter so was the population of the colonies. As important as the physical beating the British took in these battles was the psychological damage. These were not minor skirmishes that were blown up as propaganda victories, they inflicted real losses on the British and showed that under the right circumstances, the Americans could stand up to both the Hessians and the British. As Fischer shows, the immediate outcome of the battles was to force the British to withdraw inside a defended perimeter, and to encourage the guerilla war fought by the New Jersey militia, which Fisher titles the "Forage war". When reading the final chapters of this book, I could not help drawing connections with the Vietnam War. Although the Tet offensive was a lost battle, it brought up the idea that winning the war might be too costly to support. Similar ideas must have gone through the British mind after Trenton and Princeton, with the difference that Washington actually won those battles. To his credit, Fischer does not draw the parallels, or even mention the Vietnam War. He limits himself to the facts of the Revolution, and leaves the speculation entirely to the reader.

Compelling, perceptive history at its best

Published by Thriftbooks.com User , 18 years ago
On a number of occasions I have recommended David Hackett Fischer's "Paul Revere's Ride" as one of the finest American history books I have ever read, a display of deep research, perceptive analysis, and a highly compelling prose narrative. With "Washington's Crossing" Fischer has matched his earlier book. Just as the title incident in "Paul Revere's Ride" served to signify Fischer's broader study of the earliest days of the American Revolution and the battles at Lexington and Concord, here Emmanuel Leutze's 1851 painting "Washington Crossing the Delaware" is the emblem chosen to represent the most crucial days at the end of 1776 when that Revolution seemed on the edge of collapse, but George Washington and his army in battles at Trenton and Princeton and in the little-known actions afterwards reversed the course of the war and set the British on the path to ultimate defeat. Although most Americans probably have at least a passing familiarity with Washington's surprise victory over the Hessians at Trenton on the day after Christmas, 1776, Fischer's account highlights an equally crucial, yet barely remembered, battle at Trenton a week later when the American forces withstood a counterattack by Lord Cornwallis's forces, setting the stage for a daring overnight march by Washington around the British army to win another victory at Princeton. Over the next several weeks, the British and Hessian occupation of central New Jersey collapsed as the Americans, heartened by the events at Trenton and Princeton, struck repeatedly and successfully at detachments of foragers who discovered that the supposedly pacified countryside was suddenly hostile territory. Within a few months British generals who had believed the rebellion almost crushed found that the path to victory had vanished in the snow and mud. Fischer presents vivid portraits of the generals and common soldiers on both sides of the conflict, while dispelling old myths. The Hessians at Trenton were not awakened from drunken sleep after Christmas carousing. The American army, although sometimes short of clothing and food, was well-armed and typically enjoyed a battlefield superiority in artillery. Washington comes across as a far more complex and flexible character than he is usually depicted (in a lengthy appended essay, Fischer surveys more than two centuries of artistic representations of Washington and the victories at Trenton and Princeton), but the real heroes of Fischer's narrative are the ordinary soldiers of the Continental Army and the local militias. He argues persuasively that these men were genuinely motivated by their ideals of liberty (although a New Englander of Glover's Marblehead Regiment might differ from a Pennsylvanian frontiersman or a Virginian planter as to exactly what constituted liberty and a proper society) and it is they, not just the generals riding boldly across painted canvases, who deserve much of the credit for maintaining the Revolution and seizing the init
Trustpilot
Copyright © 2022 Thriftbooks.com Terms of Use | Privacy Policy | Do Not Sell or Share My Personal Information | Accessibility Statement
ThriftBooks® and the ThriftBooks® logo are registered trademarks of Thrift Books Global, LLC