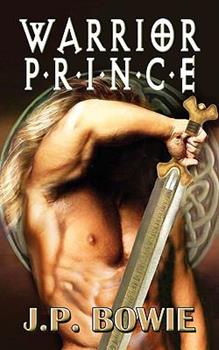 (Book #3 in the Slaves to Love Series)

Set in the early turbulent years of the Roman Empire, and seen through the eyes of three men, Warrior Prince tells the story of a love that will not be denied, of courage in the face of adversity, of political intrigue, betrayal and death. Against this backdrop of death and mayhem, Lucius and Callistus, two estranged lovers, meet at last, but can their love overcome the enormous odds they must face when it seems that every man - and the gods - are...

Good story, but too much of sugary language

Published by Thriftbooks.com User , 11 years ago
I liked the story and characters, I thought the plot was interesting and fun, I thought lovemaking scenes were hot, but I could have done with less "Oh my love, will love you forever" (paraphrasing) proclamations. I love sweet romances, but this time language was way too sugary for my taste, especially for who the leads are. I just do not see them talking like that, even in Latin :)

Published by Thriftbooks.com User , 12 years ago
I'm a fan of historical fiction and this story ranks high on my list of favorites. This epic tale really captures the atmosphere of the ancient world and the men who fought and died and loved during the tremendous wars that seemed to rage endlessly between the Romans and the Gauls. Almost every page is action packed, filled with detailed and colorful descriptions of scenes and characters that make this story extremely believable. I was totally caught up in Lucius's quest to find Callistus, the lover he had never forgotten despite the years that separated them. Their reunion is beautifully told, and the eroticism they generate is more than enough to satisfy the senses. Kudos to the author for an excellent exploration of a distant time when men fought and loved with equal passion.

Published by Thriftbooks.com User , 12 years ago
Warrior Prince is the sequel of a previous novella by J.P. Bowie, part of a two novellas anthology, Slaves to Love: Erotic Love Stories of Ancient Rome. Shame on me I didn't read the previous book, but the author took pity to the like me, and wrote a brief but comprehensive prologue. And since I'm a total looser with happily ever after, I'm almost happier like that, since now I know that in the first novella Lucius and his lover Callistus were separated, and I probably wouldn't like at all to read a story with such an end. So at the beginning of this new book (novel lenght, so we have plenty to read), Lucius, a young capuan teacher, is mourning his lost lover Callistus; Lucius is from a patrician bu impoverished family and three years before he had the chance to meet a rebellious gladiator, Callistus, a Gaul who joined the Spartacus' mutiny. Lucius helped Callistus, but above all he fell in love; probably Callistus didn't want to subject Lucius to an unknown destiny and after an heartbreaking night of passion, he left. There is also the "little" problem that, at home, Callistus is a "prince", the only heir to the command of his tribe, and so he must marry and produce an heir. And Lucius, on his side, is the only caretaker of his family, a widow mother and two little sisters, and he can't leave them alone. So Callistus can't stay in Capua, and Lucius can't go in Gallia, the only reasonable solution is to break their relationship. After three years, Lucius has seen the three marriages of both his sisters and his mother, and after "selling" himself to a rich merchant, he has also paied off his father's outstanding debt. So now he is free to do as he likes, and what he likes is to find his Gaul lover. In his quite naive mind, the perfect solution is to join the Roman's army which is fighting with the people of Callistus. After seducing, or being seduced, by a Roman's general, he joins the Army in a rather privileged position, but still he is not far from danger, and infact, before rejoining with his lover, he will have to go through some trouble. But all in all Lucius has a good star that watch upon him, and truth be told, he is luckier than a lot of other people in his same situation. This novel has quite an epic feelings, battlefield and gladiators, starcrossed lovers and betrayal, it has all the ingredients for a good historical romance. It has not perhaps the cruelty that sometime I found in stories setting in the same period, even if some events that happen around Lucius are far from being "nice", but all in all, as I said, Lucius is lucky enough to always get out of trouble with little inconvenient. Maybe since Lucius arrives to me like a man willing to "compromise"; he has his ideals, and he puts love in front of all, but he is not an intolerant man, he doesn't see things in black and white. For example, he whored himself to pay his father's debt, but he saw it like a barter and remained friend with the counterpart. And when he falls in cap

Published by Thriftbooks.com User , 12 years ago
In his latest novel, Warrior Prince, J.P. Bowie transports us back to Italy in the year 67 B.C., a turbulent time when the Roman Empire was at constant war with neighboring Gaul. A young tutor named Lucius has fallen in love with the fearless, ruggedly handsome warrior leader, Callistus, who bravely defends his homeland against invading Roman troops. Lucius' burning desire to be reunited with Callistus sets him off on a treacherous journey filled with risk, hardship, and possible death on the battlefield. It is against this dramatic backdrop that the two men finally meet again after many years, and once again rekindle the undying love that they feel for one another. Theirs is a passionate bond that knows no fear or limitations, and their searing romantic encounters are heightened by the fact that either one could be killed at any moment. Come what may, it is their all-consuming love that pushes them forward in the face of seemingly insurmountable obstacles and impossible odds. The manner in which brave Lucius rescues Callistus from a dungeon deep within the bowels of the Roman Colliseum will surely take your breath away. J.P. Bowie's powerfully emotional saga is richly laden with characters, conversations, and situations that are at once vividly real and timelessly relevant. Sometimes you almost forget that it's all taking place over 2,000 years ago. Ultimately, Warrior Prince is an epic tale of how true love can survive even under the most brutal and barbaric of circumstances. A love story for the ages! Book Review by Anthony D. Tanner
Copyright © 2020 Thriftbooks.com Terms of Use | Privacy Policy | Do Not Sell My Personal Information | Accessibility Statement
ThriftBooks® and the ThriftBooks® logo are registered trademarks of Thrift Books Global, LLC