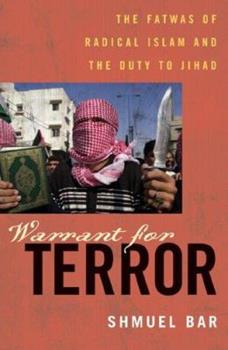 Warrant for Terror: The Fatwas of Radical Islam, and the Duty of Jihad

Since September 11, 2001 much has been written about "Islamist terrorism," arguing that it is a perversion that has "hijacked Islam" in the service of social, political and economic grievances. However, such accounts cannot explain why other people that can lay claim to similar or more serious grievances have not developed such devastating religious terrorist ideologies. Moreover, many of the terrorists themselves have attested to their own religious...

Published by Thriftbooks.com User , 16 years ago
Plenty has been written about Islamist terrorism, but these writings can't explain why other groups who have even more to complain about haven't developed such religiously-based terrorist ideologies. Warrant For Terror: The Fatwas Of Radical Islam And The Duty To Jihad narrows its focus to the fatwas, legal opinions declaring whether a given act under Islam is permitted, forbidden or obligatory. From how Islamic law operates to how it determines the duty to jihad, Warrant For Terror offers many insights.

Published by Thriftbooks.com User , 16 years ago
The following are an abstract and some reviews on the book: Abstract Since September 11, 2001 much has been written about "Islamist terrorism," arguing that it is a perversion that has "hijacked Islam" in the service of social, political and economic grievances. However, such accounts cannot explain why other people that can lay claim to similar or more serious grievances have not developed such devastating religious terrorist ideologies. Moreover, many of the terrorists themselves have attested to their own religious motivation and their belief that they acted in accordance with the precepts of Islam. Warrant for Terror examines fatwas, which are legal opinions declaring whether a given act under Islam is obligatory, permitted or forbidden and which serve as a major instrument by which religious leaders impel believers to engage in acts of jihad. These fatwas come from all over the Muslim world, but mainly from the Arab world. And they should not be dismissed as a cynical use of religious terminology in political propaganda. Many terrorists testify that they were motivated to act by them. Indeed, this book shows that Islamic law plays a central role in determining for believers the practical meaning of the duty to jihad. It also examines the underlying religious, legal, and moral logic of these fatwas and the depth of their influence in contrast to alternative moderate Islamic interpretations. And the book explores the wide scope of issues that these fatwas deal with, covering almost all facets of Islamic "law of war:" the justification for declaring jihad; the territory in which the jihad should be fought; whether women and children may participate in jihad; the legality of killing women, children and other non-combatants; the justification for killing hostages and mutilating their bodies; and the permissibility of diverse tactics and weapons, including suicide attacks and even nuclear weapons and other weapons of mass destruction. This book also delves into the contradictions between the radical and the mainstream narratives and the sources of the weakness of the latter in the face of the former. In the conclusion, the author raises a number of provocative questions relating to the "religious policy" of the West in the face of the threat of Islamic extremism. Reviews "Non-Muslims rarely pay attention to the religious struggle within Islam. They must, urgently. Radical clerics, wielding the deadly accusation of apostacy, have silenced most mainstream Muslim clerics and regimes in the Muslim world on the issues of jihad and terrorism. We are at serious risk of having hundreds of millions of religiously-driven enemies and deferential followers."--R. James Woolsey, former Director of Central Intelligence "Shmuel Bar has written one of the most important and compelling books in recent years. If you want to understand Islamic terrorism and jihad, this is the book to read. He has written an absolutely brilliant page-turning analysis of the dyn

Published by Thriftbooks.com User , 16 years ago
This is an excellent book for those wanting to understand Jihad and the justification for Jihad. How do Muslim terrorists justify killing innocent women and children? What are fatwas and why should we care? Although somewhat scholarly, this book is readable and is perfect for those wanting to understand what motivates the evil doers.

A good description of Islamic terrorism and jihad

Published by Thriftbooks.com User , 16 years ago
Since this book attacks some truly counterproductive behavior on the part of a politically strong element of Islam, I think we need to put this in perspective. As a Pagan and a Zionist, I strongly oppose religious fanaticism and tyranny. Islamic fundamentalism is just one more in a long line of bad ideas. But I think we need to be careful not to regard Islam as special in this regard. There is indeed a genuine threat to human society right now which is Islamic in nature, and that threat ought not be overestimated, nor underestimated, nor otherwise improperly described. And I think this book is fair here. It is true that people of other religions, even in recent times, have behaved very badly. One need only look at World War Two, or Rwanda for examples. In order to be intolerant, it is surely neither necessary nor sufficient to be a Muslim! Still, this short book deals, quite properly, with Islam. And it raises an immediate issue. Whether one is a Muslim or not, to what extent ought one tolerate intolerance? I do not have an answer for that question, but I strongly feel that in the long run, intolerance such as what we are seeing today is self-defeating. And at some point, it is best for everyone if it is opposed. Failure to oppose intolerance quickly turns into complicity with it, especially when silence often implies consent. This book shows that radical Islam is not merely intolerant but is also engaged in a fight against much of the world. And that Islam itself is indeed a characterizing element of Islamic aggression and terror. As the author explains in his introduction, some folks insist on dismissing all threats from Islam, going so far as to label concerned people (including even concerned Muslims) as "Islamophobic" or "bigoted." I think this book shows these folks to be not only wrong but a part of the problem. Is there a way to fight back against religious leaders who preach in favor of intolerance, aggression, and terror? The author says that there is. Such acts are criminal, and they can be outlawed, with consequences awaiting those who engage in them. Sooner or later, in my opinion, something of this sort will happen. Meanwhile, I think that the Muslim community has to figure out how to avoid constant and costly wars, both within the ummah and against, um, the giaours. I recommend this book.
Trustpilot
Copyright © 2022 Thriftbooks.com Terms of Use | Privacy Policy | Do Not Sell or Share My Personal Information | Accessibility Statement
ThriftBooks® and the ThriftBooks® logo are registered trademarks of Thrift Books Global, LLC