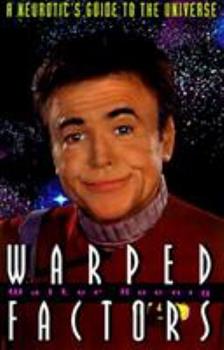 Warped Factors: A Neurotic's Guide to the Universe

Published by Thriftbooks.com User , 16 years ago
Walter Koenig writes candidly about his experiences with Star Trek and many other topics regarding his career as an actor and writer. His recollections of his years on the TOS is quite interesting and provides quite a bit of "behind the scene" glimpses of certain episodes..Being a die hard Trekkie, I found this book to be a very enjoyable read! I have also read the other supporting cast member's books and feel that Walter's is one of the most articulate and amusing..some of his recollections of his "life on the road" with James Doohan and George Takei making video store appearances are hilarious! Walter also write deeply about his feelings toward William Shatner and reveals how hurt he felt on a couple of occasions.. After reading the other cast member's books you can't help but feel that there was "something" going on there...It's kind of like if you worked for a company for many years and are treated as if you were "nothing" and just a body to kick around.. I'm sure in life there are many who are placed into this role who feel extremely stressed and down..it's no different with actors I'm sure..However, Walter seemed to maintain his dignity throughout..sometimes in life you just have to live by "the golden rule"..Treat others as you would like to be treated.." I think if everyone followed this simple principle life would be grand! Star Trek has given pleasure to many fans around the world and it is quite interesting to read the memoirs of cast members to truly see how the show has affected their lives and to laugh at their interesting anecdotes! There are plenty to be found in this book and asides from talking about Star Trek, Walter talks about his career as a struggling actor in the beginning and his later career as a writer. Walter writes very well and I feel he should write more books on other topics! He definitely has a talent in this area! I've never watched Babylon 5 so I'm not familiar with his role as Alfred Bester but I have seen all 79 TOS episodes and all 6 of the films so I am quite aware of his work as Chekhov..It would be interesting to see Walter in some of his other work..As an example..I recently saw George Takei in "The Encounter"..a classic Twilite Zone spisode and was blown away by his acting! George's role was very powerful however, you were never really able to witness it much in Star Trek..I think that's why some of the other supporting cast members held some resentment towards Shatner because they felt that he was trying to minimize their contributions..hearing Shatner's take on it in the wonderful documentary, "Mind Meld" with Leonard Nimoy..you feel as if Shatner felt these claims were trivial and that he truly did not understand what these actors were going through..I really have a hard time believing that...Walter, although hurt by Shatner's behavior over the years still has a begrudging respect for him as do the others with the exception of perhaps..James Doohan. Anyways, if you are a Trekkie this boo

So nu, he really is a Russian!

Published by Thriftbooks.com User , 21 years ago
Walter Koenig is the second cast member from classic Trek to openly discuss his Jewishness (the first being Leonard Nimoy. William Shatner is also Jewish but so far, he has made only very scant mention of it in his prolific pile of print.) In this truly candid autobiography, we learn that Walter Koenig's grandfather's surname was originally Koenigsberg, and that the family were Russian Jews who from Vilna, Lithuania. (Where they were hated as both Russians and as Jews by the local Lithuanian populace). Like so many immigrants who came to the USA in the late 1800's, grandfather Koenigsberg had his name shorted at the immigration desk. His son, Isadore Koenig (Walter's father), worked for RCA in the 1930's and, because he spoke several languages, was sent to Europe as their representative in the 1930's. Walter describes a hair-raising childhood scene in a German train station, where his father lies through his teeth in order to pass for a visiting German-American in a land where Jews are already being forced to wear yellow stars. The ruse works, and the German officer encourages Herr Koenig to remain in Germany where "great things are happening in the fatherland." No thanks. Back in the USA, the Koenigs are suspected of being Communists during the McCarthy era, both because they are of Russian background, and because Walter's father is a member of the Labor Party and reads the Daily Worker. The fact that the Rosenbergs -- an American Jewish couple accused of spying for the Communists in the 1950's -- were actually executed as traitors by the American govenment does not exactly make Walter feel secure about his identity. Is it any wonder he turned out to be, in his own words, such a neurotic? His acting career seems to have happened almost by accident, based, in part, on the encouragement of a kind school teacher who saw potential in an unpopular child with low self esteem. Walter came up through the ranks like most actors, and eventually got the part of Chekov because of another Russian character he had previously played. At the Trek audition, he played Chekov as a more serious character, but Roddenberry asked him to do it again in a comic mode -- which he did, and got the part. However, Koenig never felt that Chekov was given much depth beyond cliches about how the Russians claimed to have invented everything (a joke on real-life historical revisionism in the USSR), and doesn't feel that the character really came into his own until the Star Trek IV movie. Walter also points out a really major continuity blooper regarding Chekov: that Khan in Star Trek II recognizes Chekov from the "Space Seed" episode -- but that aired in the first season, and Chekov did not come onto the Enterprise until the next season! Prudently, Walter did not point this out to the producer, lest his character get written out of the scene. One mystery that Koenig didn't clear up in this book is -- exactly where did h

Published by Thriftbooks.com User , 22 years ago
The price of this book wasn't peanuts. And Walter Koenig being one of the "lesser gods," I debated about buying it. I wasn't disappointed. Far from it. To quote a famous line, "I laughed so hard I nearly peed my pants!" Koenig tells a humorous story tinged with the painful awareness that only a true neurotic can supply. We all can identify with the "other shoe" syndrome (waiting for the other shoe to drop). In "Warped Factors," we cringe while Walter "waits." I quickly found myself on first-name basis, silently begging, "Please, Walter--not again. Don't screw this one up." Alas, he usually did. Through him, I truly feel I experienced the Hollywood scene first hand: between laughs, I found my stomach tied in knots.The Star Trek memoirs come late in the book, but no one will mind the delay. The humor makes up for it. As for the Trek lore itself, it's just more of the same old, same old. "I wish I'd had more lines," is the recurrent theme. Granted, Chekov's "Yes, Keptin" doesn't quite qualify for icon status as does McCoy's "He's dead, Jim." But Koenig's own attempts at scriptwriting don't improve on that. In one proposed outline, he includes a fencing match for Sulu. (Been there, done that.) This plot calls for mass annihilation of the original crew--a disaster that would have spelled death for the Star Trek ideal. It seems a depressing attempt to precipitate the inevitable end (rf. "Star Trek VI: In Flanders Field"--see appendix). Fortunately, it didn't take.Regarding cast quarrels, Koenig seems to resent Leonard Nimoy. Twice he alludes to some falling out that he never specifies--but it seems to have left a scar. He does praise Nimoy's generosity in standing up for him and others during contract negotiations, but puts it down to "noblesse oblige." I must admit, I've had the same thought. But truth or not, it seems ungrateful of Koenig to mention it, considering that Nimoy's "Star Trek IV: The Journey Home" does more to flesh out Chekov's personality than the entire run of the original series. Koenig's attitude seems like petty vengeance for some perceived slight. Neurotic, huh? But hey--we were warned.Nit-picking aside, this book may be the best Star Trek bio ever for pure enjoyment--surpassing even Nimoy's. Subjective writing is definitely Walter Koenig's forte. I haven't yet read his first book, "Chekov's Enterprise." Now that I've sampled his writing, I can't wait!

To know Walter Koenig is to love him

Published by Thriftbooks.com User , 23 years ago
On page 150 of Walter Koenig's new book, "Warped Factors: A Neurotic's Guide to the Universe," there is a photo of the actor/writer at the age of six months. He is preoccupied. The face on this child has an old look about it, and he is fretting about something. The baby picture, we come to find out while reading this delightful book, is prophetic. It gives us a clue to the situations that will later make Koening tick... and sometimes self-destruct. "Warped Factor" is a much more intimate look inside an actor than most egocentrical folks are willing to share. Here, in plain black and white are Koenig's dreams, the good ones and the bad; his relationships, all without rancor; and the almost frantic way he has of sabotaging himself.It takes him through his confusing life, from his father's flirtations with communism, through his elementary and high school years, and the many manifestations of his career, which is truly one of which Michael Straczynski, creator of Babylon 5 describes as "lightening striking in the same place twice." If you're looking for Checov here, you'll find him, but deeper. If it's Alfred Bester you want to get to know, he's there too, layered by people Koenig had known, for good or for bad. I highly recommend this book. It's written by a man who truly loves and respects his fans, doesn't overwhelm them with baggage, but is simply and courageously inviting them in for a visit. This one is lovely, Walter. I laughed out loud.

Koenig's insights are well worth warping into.

Published by Thriftbooks.com User , 23 years ago
Walter Koenig is an interesting fellow, as witnessed by his latest book, "Warped Factors." Instead of another retelling of the myths and magic surrounding the Star Trek phenomenon, we finally get to meet the man behind the character of Chekov. No Hollywood posturing here, folks; we see all the insecurities of this actor/writer, in an entertaining blend of humor, insight and candor. Best of all, we get a sense of exactly who Walter Koenig is -- mischeivious younger brother, product of uncertain times, a respectable talent forging ahead to transcend Star Trek, looking even farther into the future with "Babylon 5" and other endeavors. This is a voyage you will very much want to take, with a man who is so much more than merely another pop icon. I greatly enjoyed hearing what Walter Koenig had to say about his life, his career and his future. I'll bet that once you crack the back on "Warped Factors," you'll be hooked, too.
Copyright © 2020 Thriftbooks.com Terms of Use | Privacy Policy | Do Not Sell My Personal Information | Accessibility Statement
ThriftBooks® and the ThriftBooks® logo are registered trademarks of Thrift Books Global, LLC