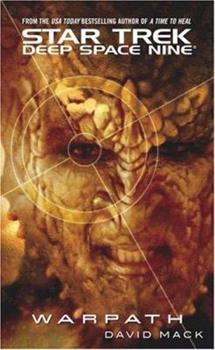 They were created to be killing machines. Highly intelligent, resourceful, and deceptively complex, the Jem'Hadar are a species engineered for war and programmed at the genetic level for one purpose: to fight until death as soldiers of the sprawling stellar empire known as the Dominion. No Jem'Hadar has ever lived thirty years, and not even their masters, the shape-shifting Founders, know what such a creature is capable of becoming were it to be freed...

Published by Thriftbooks.com User , 12 years ago
I received a copy of this book, from the author, at a convention in Maryland. When I started reading it, I couldn't put it down! If Mr. Mack is reading these reviews, I hope he is working on a sequel to Warpath as I want to know what happens next!

Published by Thriftbooks.com User , 15 years ago
It was shocking to read some of the things that happened to our favorite DS9 characters. The book has several very tense moments and it makes for some really great reading. The end shocked me, and I can't wait for the new book. What I love with these relaunch books is that you find out what happens to this character or that character, or they kill off this lesser character from the series, or re-introduce a lesser character into these new stories. It's so fascinating and only pulls you in all the more. As I'm reading the other reviews I can't believe we have to wait a year for the next book? That's kind of ridiculous. It's far too long. (I'm just impatient! ha) DS9 is my favorite of the ST series and I've been avidly reading the relaunch books once I found out about them. I had just finished with the previous book (Worlds of Star Trek III) when I found this one was ready. I didn't realize there was such a long wait between books, and it's quite distressing!

Published by Thriftbooks.com User , 15 years ago
Anybody trying to argue that Star Trek is dead or dying hasn't read the DS9 relaunch novels. Warpath continues this fine tradition of good story telling and probably benefits from taking canon into its own hands. The only thing I would caution is that there is reference to things that happened in the Gateway novels (I think at least, it's been awhile). It's not 100% necessary to have read the DS9 books (and part of the conclusion) but it definitely would add more meaning. Some of the battle/fight scenes got a little too descriptive and detail-laden for my tastes. Also, part of Kira's experiences had me flashing back to quite a bit of Lord of the Rings -- maybe it was just the mental picture I formed. However, don't be mistaken, it's worth the read. I think if nothing else it will be a strong stepping stone between novels as this continuation... continues. Couldn't wait to get my hands on this and now my only disappointment is that I'm done with it. The referenced sequel "Fearful Symmetry" is currently slated to keep us hanging until April of 2007.

Published by Thriftbooks.com User , 15 years ago
This is another great post-DS9 story and another great story from David Mack. If you like star trek or DS9 get this book it desveres more tham just 5 stars.

Get ready for another roller coaster ride...

Published by Thriftbooks.com User , 15 years ago
David Mack (who wrote "A Time to Kill" and "A Time to Heal" in the ST:TNG series) has done an excellent job picking up the many threads that were left hanging for readers in the DS9 world after all the short stories in the "Worlds of DS9" were published, and beginning (and yes, the story is not yet finished - there is an advertised sequel coming) to weave them all together. Basic plot: Taran'atar, the Jem'Hadar that Odo sent to live on DS9, has snapped. After nearly killing Kira and Ro, he manages to get off the station undetected, with Prynn Tenmei as his pilot/hostage. As Bashir and the medical staff work frantically to save Kira and Ro, Vaughn takes the Defiant and begins to try to track down Taran'atar, leaving Dax in charge of the station, Nog trying to find out the reasons behind Taran'atar's actions, and Quark at Ro's bedside. That's just the basic plot. (Here be a small spolier!) Things really begin to get more and more complicated when the alternate universe is brought into the mix. Two major cliffhangers from the short stories - the massacre of Sidau village, and Taran'atar's mental state and attack on Kira and Ro - are also explained. Strong points: - Kira's struggle to live (Prophets included) - Ro and Quark's interactions - Vaughn's internal perceptions of his relationship with Prynn - Prynn's fight to survive her kidnapping Weak points: - Alternate universe (I've never been a huge fan of it, but at least it works well and isn't just brought into the plot for the fun of making Kira a power-hungry sex machine) - Dax in charge of DS9 (she gets to do almost nothing except pass along information and talk with Sisko) This was a fun, fast read - if you were hooked on the DS9 relaunch, you NEED to read this book. Mack has a good handle on the characters, the story is very tightly written, and there are no slow points. The major down side - there are still many questions to be answered, and there is no publication date given for the advertised sequel! I can't wait a full year AGAIN for another book!
Copyright © 2020 Thriftbooks.com Terms of Use | Privacy Policy | Do Not Sell My Personal Information | Accessibility Statement
ThriftBooks® and the ThriftBooks® logo are registered trademarks of Thrift Books Global, LLC