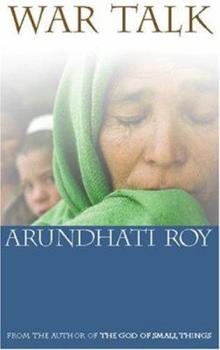 As the United States pushes for war on Iraq, Arundhati Roy, the internationally acclaimed author of The God of Small Things, addresses issues of democracy and dissent, racism and empire, and war and peace in this collection of new essays. The eloquence, passion, and political insight of Roy's political essays have added legions of readers to those already familiar with her Booker Prize-winning novel. -Invited to lecture as part of the prestigious...

Published by Thriftbooks.com User , 19 years ago
Contrary to one of the detractors writing here, Arundhati Roy's voice is heard far too little in this country. Unlike the right-wing, war-loving bigots (among whose number we can count the aspiring dictator George Bush), Roy nails the facts to deliver a series of damning critiques.

Prepare to face the truth!

Published by Thriftbooks.com User , 19 years ago
As Americans being exposed to the recycled garbage churned by local media every day we surely are not accustomed to listening to the bitter reality of politics around us and that too explained so beautifully.

Roy is always worth reading

Published by Thriftbooks.com User , 19 years ago
War Talk is the most recent book of essays by author Arundhati Roy (The God of Small Things). In this volume Roy continues to take on India's Big Dam project (a subject in her previous two volumes of essays), as well as violence world wide. She does not spare her native India anything and takes on the War Against Terror and the hypocrisy of U.S. foreign policy. It is always a pleasure to ready Roy's work. She gives out a viewpoint of a citizen from another country and brings a new voice to the table. She condemns how Americans are presented information and understands that it is difficult to get truly factual from the press (any press). She also praises Noam Chomsky for his work in revealing some of the lies that are fed to Americans by the United States government. I am not informed enough to know anything about the accuracy of her statements regarding U.S. policy, but Roy has a viewpoint that should be considered. I feel that the biggest value in Roy's essays comes in revealing information about Indian politics and Indian life. I know very little about India, and Roy is a valuable source of information and makes me want to learn more about this ancient (yet young) nation.

Published by Thriftbooks.com User , 19 years ago
Arundhati Roy's "War Talk" is written with an unique blend of passion and moral clarity. By sympathizing with the struggles of the lower and middle classes against their increasing exploitation by the powerful, the book serves as a bottom-up indictment of violent global capitalism. Ms. Roy suggests that war is merely the most extreme manifestation of an elitist capitalist system that is sustained by subsuming all available land, labor and resources to its own ends. The result is a scathing and compelling critique of capitalism and politics as practiced in both the U.S. and her native India.Ms. Roy initially made her mark as a novelist, and her gift for prose is turned to very good use here. In an era when the corporate media routinely treats moral issues in an ambiguous manner, the author's convictions seem to be almost revelatory. For example, when discussing the standoff between India and Pakistan over the contentious issue of Kashmir, she writes, "Why do we tolerate the men who use nuclear weapons to blackmail the entire human race?" Why, indeed?While Ms. Roy minces no words about the growth of fascism in India, she credits President George W. Bush and Prime Minister Tony Blair with creating "a congenial international atmosphere" for fascism to take root. This is a world where the U.S. uses its military might to support its multinational corporate empire. Destroying countries that harbor terrorists is only its most obvious and visible form. Ms. Roy believes that it is the mistreatment of the poor by the powerful -- e.g., the lack of respect for human rights; the privatization of public resources; the monopolization of "free" speech by media corporations; and so on -- that ultimately defines the empire and, conversely, the struggle that must ensue to confront and supplant it. I give this book the highest possible rating and highly recommend it to anyone who might be struggling to understand the increasingly violent world we are inhabiting.

a blast of fresh air

Published by Thriftbooks.com User , 19 years ago
This is a wonderful book.The essays cover an enormous range of subjects, from politics in India to the rapid rise of the US to Empireship.Two things are most refreshing: First, Roy's clear-eyed ridicule of US self-importance and self-mythologizing. Second, her unwavering contention that all war is essentially a war of the rich against the poor.She is biting and humorous and absolutely indignant at the misinformation and disinformation people in the US are fed to justify the US corporate takeover of the world--with the aid and support of almost every government, bought and bribed and stolen.
Trustpilot
Copyright © 2022 Thriftbooks.com Terms of Use | Privacy Policy | Do Not Sell My Personal Information | Accessibility Statement
ThriftBooks® and the ThriftBooks® logo are registered trademarks of Thrift Books Global, LLC