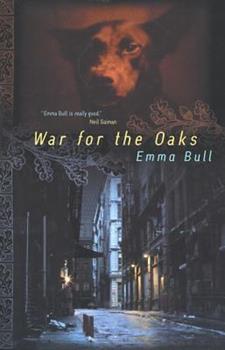 War for the Oaks

Acclaimed by critics and readers on its first publication in 1987, winner of the Locus Award for Best First Novel, Emma Bull's War for the Oaks is one of the novels that has defined modern urban fantasy. Eddi McCandry sings rock and roll. But her boyfriend just dumped her, her band just broke up, and life could hardly be worse. Then, walking home through downtown Minneapolis on a dark night, she finds herself drafted into an invisible war between...

war for the oaks

Published by Thriftbooks.com User , 12 years ago
wonderful book -- fantasy firmly grounded in reality -characters I fell in love with - read it again and again -- Get it, Read it!

Published by Thriftbooks.com User , 16 years ago
You would think that really liking a book would make it easier to review After all, I should be able to go on for pages and pages about how wonderful it is. The problem with that theory is that wouldn't really be a review. That would be me raving about the book, and while that's all well and good, that's not what I want to do. So, just so I can get it over with, let's start with what I didn't like about War for the Oaks. The first thing that comes to mind is that I really wanted to know what the Pookah's name was, but that's really just me nit-picking. I guess the main thing that I had a problem with was some of the characterization. Yes, the main characters were characterized well, but I felt that there was room for improvement with the characterization of some of the band members. Bull herself even says in the back where she's talking about the screenplay she wrote for the story that one band member in particular is a very interesting character and so she gave him more room in the screenplay. I would have to agree that he seems like an interesting character, but I wish he had gotten more development in the book. For probably about 75% of the story he was just there, not really doing much other than playing the instrument with the rest of the band. There was room to do more with him. The other thing that bothered me slightly was the way that the Seelie Court (Seleighe Court, Bright Court, Summer Court, whatever you prefer) approached Eddi. While I get that they were desperate and that they are Fae and think and react differently than humans, I was shocked by their abruptness. However, I think that a lot of that is that I like to think that the Seelie Fae are shiny, happy, friendly creatures when most theories have them as cool and unsympathetic. What makes them Seelie is that they don't actively seek to hurt. They may occasionally help, but humans are still mostly amusement. It still jars me a little when I see that sometimes, though. Other than that, though, I can't really think of anything else that I didn't like. Perhaps I would be able to come up with something if I wracked my brain for a few hours, but then this could just turn in to a rant about the book, and I don't want that either. One thing that I particularly liked was Bull's idea of Sidhe warfare. It makes sense that having eternal (or close to it) lives, they would view war differently from humans. It is, after all, a moment's entertainment, and rarely something to be taken seriously. I loved how they danced around each other (sometimes literally) when they weren't on the battlefield, taking care not to upset the all important status quo. The party in particular amused me greatly because of the way the Seelie and Unseelie Fae were reacting to each other. I also really liked how the Fae War didn't completely overtake Eddi's life. In so many fantasy books when the protagonist is swept off to deal with the problem plaguing the Fae folk, their lives become completely about that,

Where the Magic's Real...

Published by Thriftbooks.com User , 20 years ago
"War for the Oaks" is the story of Eddi McCandry, who starts the story out playing guitar in Minneapolis bars. Coming home from the breakup of her last band she finds herself drafted into the oldest of wars. The conflict waged by the Fay of the Seelie court, the house of light, against the creatures of darkness and the queen of night herself. Her part is to be that mortal who enables the elves to kill each other, so that the battle will have a final conclusion.Emma Bull's elves are not the sweet folk that inhabit child's fairy tales. Instead they are the harsh, often cruel yet beautiful folk that frightened our ancestors years ago. Their manners have no human equivalent and they are cold, passionate, harsh, tender, noble and terrible almost at random. Into this world Eddi finds her way, guided by the whimsical Phouka who can be dog or man at will, and who dresses himself from an invisible closet of finery.In between the battles and conflicts Eddi assembles a new band composed of her close friend Carla on drums, Dan Rochelle on keyboards, mumbling Hedge on bass and Willy Silver on lead guitar. Together they become part of the magic and form the base for Eddi's own powers, which she has acquired from her new place in Faerie. But it will take all the band's power, all that the Seelie court has to offer, and a bit of pure luck besides to win the battle for Minneapolis. Especially when nothing is quite what it seems. For if the Fay never lie, they still can twist the truth to the quick."War for the Oaks" is considerably more than a fantasy tale. It is also a fine romance. The elves understand the form of love, but they have little grasp of the content. Human feelings are a world apart from them. Eddi McCandry must confront them over this weakness and teach several of them the significance and power of human feelings. This is romance without ever being exaggerated or cloying, and is what makes the novel so compelling.Emma Bull is not a prolific author. She has, I believe, four novels to her credit and a fair number of short stories. Perhaps, because of her pacing, her work is carefully polished. Settings and characters breathe with remarkable life, and her narrative has tremendous flow. She draws equally well from legend and her own creativity. Her only flaw in "War for the Oaks" is that she is not quite sure of herself in her climactic scenes, which causes some slight confusion. For a novelist in her early phases this is a mere quibble. "War for the Oaks" is one of the best fantasy stories of its time, and has already become a classic of the genre.

A Riff for Faerie

Published by Thriftbooks.com User , 20 years ago
There are no dragons here, but you won't miss them. Instead you'll find a superb tale of faerie, music, and romance. Emma Bull and Steven Brust (also a well known fantasy author) were at one point two components of the band Cats Laughing, and Bull uses her musical knowledge and experience to great advantage here. Her descriptions of practice sessions and performances will resonate with any music fan, and she skillfully weaves this into a major component of her tale of Eddi, selected by the Seelie to invoke the boon of mortality on the battles of the faerie world. To protect Eddi until the time of the battle, a phouka is assigned to guard her, at times a formidable dog, at other times a whimsical human trickster. Though quite predictable, there is a slowly building romance between the two, and this defines both characters to a depth that is rare in fantasy, as each impacts on and reacts to the other, and wind their way into the reader's heart.The world of faerie is seen at a distance (even though the major characters are directly involved in some of the faerie battles), never fully explained or examined in detail, and this very indistinctness adds flavor, a bit of mystery, and charm to what is really a story of and about some of our deepest emotions. The final battle between Eddi and the Queen of Air and Darkness is extraordinarily different, drawing on the 'magical' emotional state that sometimes occurs between the makers and hearers of music, rather than swords, spells, talismans, or some hidden bit of arcane knowledge so common to the climax of most fantasy.Different, powerful, skillfully told, this book is a charmer.

Was this the book that started the rot?

Published by Thriftbooks.com User , 24 years ago
There's any number of dreadful modern 'faerie' stories kicking around and generally getting underfoot at the moment, but this was one of the first. And it's brilliant. I read this book and I wanted to go to Minneapolis (not a particularly easy ambition, I live in Chelmsford, England) -- Bull's book is as much a hymn to Minneapolis as it is a modern fairy story. And what a story it is, Eddi McCandry is a Musician. A musician of the kind that once upon a long time ago would have been stolen away under the hill by the Fairys, but things like that don't happen any more do they? Well, yes, sort of -- in the book Eddi is `adopted' by the Seelie Court to be used as their talisman in their war with the Unseelie court for the soul of Minneapolis. Meanwhile, Eddi is trying to get a band together... It's hard to describe the story without it sounding slightly ludicrous. Hell, it is slightly ludicrous, but Bull's writing makes it work, her characters are fascinating and well fleshed out, the plot rocks, she writes about the sensation of making music like nobody else and the whole thing just works. It's a real shame about the dross that came after as others tried to dance to her tune.
Copyright © 2020 Thriftbooks.com Terms of Use | Privacy Policy | Do Not Sell My Personal Information | Accessibility Statement
ThriftBooks® and the ThriftBooks® logo are registered trademarks of Thrift Books Global, LLC