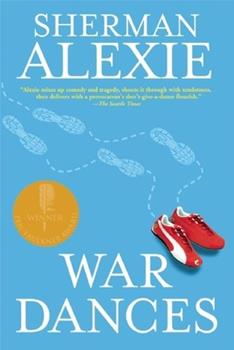 In his first new fiction since winning the National Book Award for The Absolutely True Diary of a Part-Time Indian , best-selling author Sherman Alexie delivers a virtuoso collection of tender, witty, and soulful stories that expertly capture modern relationships from the most diverse angles. War Dances brims with Alexie's poetic and revolutionary prose, and reminds us once again why he ranks as one of our country's finest writers. With bright insight...

Published by Thriftbooks.com User , 11 years ago
In War Dances, Sherman Alexie blends poetry, short stories, and experimental vignettes into a strangely cohesive and brilliant work of fiction. His "soft" prose wields the impact of a sledgehammer, and he creates literary magic. Lesser writers often look foolish attempting what Alexie makes look easy. For example, "Fearful Symmetry" appears to be a semi-autobiographical tale, as Sherwin Polatkin, a serious fiction writer, becomes demoralized by Hollywood phoniness. Polatkin loses his will to write, admits and succumbs to writers block, tries to lose himself in crossword puzzles, and then rediscovers his storytelling voice. Normally, I would cringe at the onset of any story about an angst-ridden writer. The form itself begs for ridicule. Alexie, however, smoothly conveys angst while downplaying its significance to the rest of the world. He manages to navigate this story precisely, almost perfectly conveying the complex interaction between a writer and his craft. While some may blanch at the comparison, at times I was reminded of Richard Brautigan, feeling as if I was reading something special, something successfully pushing the boundaries of fiction and literature. But, of course, Alexie has his own unique voice and uses it masterfully, especially in the title story "War Dances" where I find myself agreeing with the dust jacket praise. How often does that happen? Worth reading more than once! As with all my writing, feel free to "feed it to the fish," and if so inclined, review my novel Where the River Splits.

Published by Thriftbooks.com User , 11 years ago
War Dances by Sherman Alexie Grove Press, 209 pp. Sherman Alexie is as interesting a person as he is a writer. A few years back I heard him do an interview with national conservative talk show host, and Seattle-based, Michael Medved. Although Alexie declared himself somewhat left on the political spectrum, I found him to be one of the most delightful (and I'm not a guy who uses that word often, but it fits) interviews I've ever heard. While so many folks, on both sides can sound downright mean, Alexie is honest, self-deprecating, insightful, and quite funny. Why did I start this review of War Dances with a review of Alexie's interview prowess? Well, because I found many of the reasons I liked the book are the same reasons I'd liked the interview. While at times I laughed, saddened, and even winced, I was sucked in by every word. While the stories appear to be "all over the place," you sense there is a common thread running through the stories--and there is. And these are stories that feel so real the fact they're fiction, often feels vice versa. So real. And for me, as a Seattle cop, my day job, it rang incredibly real in one particular story. A father is home alone, in Seattle's Central District, (my beat) working as a freelance film editor. There's a knock at the door at three in the afternoon. Determining that no one of any worth comes to anyone's door at that time of day, he ignores the knock and returns to his work. A minute or two later he hears a window break, and confronts a burglar who's broken in. The remainder of the story is fascinating, but I can tell you this specific type of burglary, this M.O., Modus Operandi, is unfortunately way too common in the neighborhood Alexie describes. The stories in War Dances all have this sense of realism, and are uniquely compelling. The way the book is composed, longer, short stories, are interspersed with poems. I'm probably not the most qualified to judge poetry, but, like with wine, I know what I like. I respond to Alexie's poems like no one else's I read. Normally when I read poetry I either, roll my eyes, gag, and then determine immediately, it sucks. My alternate determination is ambivalence: I truly don't know if I like it or not. Since poetry is too often associated with the realm of pretense, sometimes I think I'm supposed to like it, like I tried to like Maya Angelou's poem at the last presidential inauguration. I felt I was expected to like it, I've liked some of her other poems, I tried to like it--alas, for me, not! I'm not sure what it is, but I find most of Alexie's poetry deeply satisfying. I may risk some pretension here myself, but I find it refreshingly honest. It feels as if the poet is truly writing for himself--damn the reader (in a nice way), but this is stuff that feels like it really means something to him, and though he may not care if it means something, or anything, to others, it does mean something to me, and I'd guess it will resonate with you too.

Published by Thriftbooks.com User , 11 years ago
This book is hard to describe--not a novel or a volume of short stories--more like a collection of fragments. Bits and pieces of memoir, poetry, introspection and fantasy. And a quirky sense of humor laced with sadness and remorse. If it doesn't coalesce into a unified something, that's all right. The pieces are brilliant. There's a story about a man obsessed with a woman he met briefly in an airport. A memoir about the author's alcoholic father. And most touching of all, the story of a would-be obituary writer and his encounter with an old woman who believed the dead could be brought back with salt. Well, you'll just have to read it for yourself. Author Sherman Alexie has a unique ability to blend sorrow, sadness and the sense of failure with quiet hilarity. Each story, each bit of poetry, struggles with the dilemmas of being human, of never quite living up to one's dreams. I recommend this book highly, but, read it slowly and make it last as long as you can. Reviewed by Louis N. Gruber.

Published by Thriftbooks.com User , 11 years ago
'War Dances' was the first Sherman Alexie work I have ever read. With his opening poem, "The Limited" I found myself intrigued by the irreverent style that seemed to be one of the main trademarks of the book. By the time I finished the second short story, "Bird-watching at Night" I had grasped the strength of his humor as well. And so, I purchased the book and finished it the same night. The interspersing of his poetry really was wonderful. I am sure, to some small degree, that the novelty of the author enhanced the experience, too. Sometimes it seemed as though the words in his poems were withheld from my pace by his unique spacing and arrangements, perhaps to draw out the grief or slam into my consciousness with the next line. I'm not a poetry expert--I can only say I was moved. Personal hints woven into a few of the short tales made me smile, lit me up inside. Oddly enough, "Fearful Symmetry" was my favorite. I almost felt like I was sharing the author's humor and his frustration as he committed the words to the page. His secrets became my secrets for those brief moments in time, when I found myself lost in the literature. Sometimes I certainly felt uncomfortable by the subject matter covered in certain stories or events that took place--but I understood these as necessary disturbances. Not that I would repeat the experiences by rereading those particular stories and select poems. When I pick up a book it is usually to escape, more often than it is to learn. I did appreciate the wisdom from the author's plot revelations, however--no matter if they sometimes were disturbing. A personal example, which may prove to be different for other readers, was "The Ballad of Paul Nonetheless." I intend to keep 'War Dances' and read it again at some future date. The poetry and several of the short stories are well are worth a second glance. As I have already recommended the book to family, I would also recommend this book to anyone who likes a well written short story or poem. If you are particularly interested or sensitive to Native American culture, this might also be some extra incentive to pick it up. Without a doubt, Sherman Alexie can keep you turning the pages!

Published by Thriftbooks.com User , 11 years ago
I've come to expect a certain caliber from this author's books. As usual, his writing here is jaw-dropping. Some sentences must be reread because of their beauty and power. Typical Alexie here -- disturbing, funny, and truer than most nonfiction. These stories will suck you in. Not as riveting as the National Book Award-winning "The Absolutely True Diary of a Part-Time Indian," but that may be because short stories don't allow the reader as much time to become intimate with the characters. I'd also recommend "Flight: A Novel," "Reservation Blues," and "The Lone Ranger and Tonto Fistfight in Heaven."
Copyright © 2020 Thriftbooks.com Terms of Use | Privacy Policy | Do Not Sell My Personal Information | Accessibility Statement
ThriftBooks® and the ThriftBooks® logo are registered trademarks of Thrift Books Global, LLC