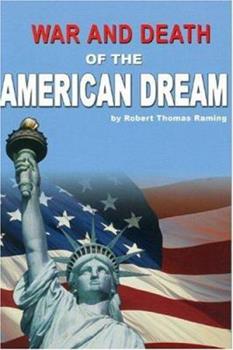 War And Death Of The American Dream

Author Robert Thomas Raming says the two-party system in America is dysfunctional. It has degenerated into a group of career politicians who have become corrupted by and addicted to the power of their office. The U.S. government, once a beacon of light for liberty and justice, has embarked on a course of war and inflation that threatens to destroy the American dream forever. A small and secret group of power brokers is intent on destroying the Constitutional...

Are our liberties at stake?

Published by Thriftbooks.com User , 17 years ago
Robert Thomas Raming has researched and tracked the hidden side of the history of America. Even as we believe we have a democracy with the right to choose policies via the political system, he shows us how often we are maneuvered and manipulated by a "Power Elite", whose agenda is quite different than the ordinary man-in-the-street. He gives us example after example of a hidden network, and the people and organizations it works through. Their agenda, he indicates, is to destroy the liberty we now have in this country which is based on our Constitution and which we so often take for granted. He believes that if people only knew in advance it was coming, they wouldn't allow it. Can this be stopped? He gives possible solutions. Very good reading.

Published by Thriftbooks.com User , 17 years ago
I hope this isn't the only book, attention, or time given to such a direct subject. Authors today seem to dance around the things they'd really like to say, with several trips to the thesauruses and cleverly placed words, all efforts to tell a story seem to turn into entertainment. This is a shoot from the hip kind of guy. "War And Death Of The American Dream" is a must read! Thanks' Mr. Raming * * * * *
Trustpilot
Copyright © 2022 Thriftbooks.com Terms of Use | Privacy Policy | Do Not Sell My Personal Information | Accessibility Statement
ThriftBooks® and the ThriftBooks® logo are registered trademarks of Thrift Books Global, LLC