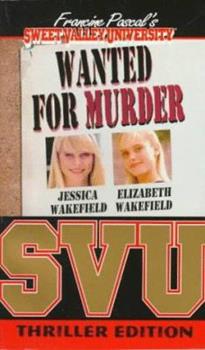 Wanted ... dead or alive. Elizabeth and Jessica Wakefield set off on a road trip to the mountains of Colorado, ready for five days of skiing and the best Christmas break of their lives. Scott Culver is a guy with a broken-down car and a face to die for, whom the twins pick up on the side of the road. He's a medical student with a month-long job at Aspen. Or so he says ... Jeff Marks is a young FBI agent searching for the outlaw responsible for a string...

Published by Thriftbooks.com User , 18 years ago
Jessica and Elizabeth are going on vacation. Along the way they pick up a handsome hitchhiker named Scott. Jessica, being Jessica, immediately falls for his handsome and charming exteriorElizabeth born four(?) minutes earlier and obviously having gotten a larger percent of smarts is not so easily disarmed. Eventually though the girls completely come to trust this smooth talking snake. And that's when they find themselves running from the law in Thelma and Louise like style, accused of a crime they didn't commit. The moral of the story: Maybe not to pick up strangers? Or maybe not to so easily trust someone just because they have a handsome face? Or maybe that Elizabeth should stop letting her emotion driven sister make rash decisions??!!Good story.

Published by Thriftbooks.com User , 20 years ago
I have not expected that this book would be so good. The spin chilling tales really hooked me in seconds. Jessica and Elizabeth picked a hitchhiker named Scott during a car trip.The unexpected keep coming and the twins were eventually framed for murder. Definitely worth your money for avid readers and loyal fans of Sweet Valley.

Published by Thriftbooks.com User , 22 years ago
I've just finished reading this book. it's funny the way danger follows the twins, when i'm here bored as ever. It was jessicas luck that she disturded scott-the fit-the-too-perfect-guy. Its crazy the way they kept going back for him, even though it was right to. Overall a fab thriller.

ONE OF MY FAVORITE SVU THRILLERS!!!

Published by Thriftbooks.com User , 22 years ago
This book was one of the best SVU books that I've ever read.Although I thought Scott Culver was a real idiot and Jessica was even more so when she tried (and succeeded)to get Elizabeth to pick him up when he was on the side of the road. Jeff Marks,I think, is way to personally involved with the case he was working on, which was armed robberies. Since his girlfriend Sunny was killed in one, he's been out for vengeance. He'd accuse anyone, even when it's obvious that that person isn't the outlaw (like Jessica and Elizabeth Wakefield) Overall, this book was excellent!!

an exciting and entertaining classic

Published by Thriftbooks.com User , 23 years ago
It was an very exciting book, one of my favorites, but a bit unrealistic. They shouldn't have taken Scott in their car so quickly. But very good, I like almost all Sweet Valley books.
Copyright © 2020 Thriftbooks.com Terms of Use | Privacy Policy | Do Not Sell My Personal Information | Accessibility Statement
ThriftBooks® and the ThriftBooks® logo are registered trademarks of Thrift Books Global, LLC