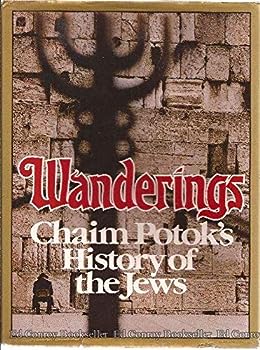 This description may be from another edition of this product. A fascinating history of the Jews, told by a master novelist, here is Chaim Potok's fascinating, moving four thousand-year history. Recreating great historical events, exporing Jewish life in its...

Brilliant and engaging, even page-turning, overview of the history of the Jews and Judaism

Published by Thriftbooks.com User , 14 years ago
"Each time the light returns and we are able to see the new world that has been created on the ruins of the old, we discover familiar elements of the overthrown civilization in the creativity of the new" (p. 379). Although specifically referring in this passage to those Germanic tribes who conquered and assimilated the Roman empire, this comment is a succinct encapsulation of Potok's larger narrative about the Jewish people. *Wanderings* demonstrates that the history of the Jews and of Judaism is a palimpsest in which the central theme of covenant relationship with God has been regularly reinvented, overthrown as it were and creatively reconstructed, so that it may maintain its relevance in a changing world. For those of us whose knowledge of the Jewish people and the religion of Judaism effectively begins with "Genesis" and ends with "Malachi," this book is indispensable. It seems equally indispensable for those raised within contemporary Jewry who wrestle, like Jacob, to reconcile the idea of a God who operates in history through his chosen people with a reality that is multi-faith and often seemingly without purpose. It does not hurt that Potok, an acclaimed novelist as well as an ordained rabbi, infuses his historical narrative with a pace and lyrical grace more in keeping with an epic novel than a work of nonfiction. Potok's narrative begins, in a manner similar to contemporary accounts, with those first great Mesopotamian civilizations, Sumer and Akkad. Against this background of cuneiform and clay, Bronze Age technology, extraordinary civilizational creativity, and the constant threats of catastrophic flood and drought, wanders Abraham of Ur, first of the Hebrew patriarchs. Even in the earliest recorded tales of this wanderer and his descendants, we are told, "the basic themes of the Hebrew Bible-covenant, liberation, redemption; the search for insight into a world assumed to be meaningful-remain essentially the same..." (P. 40) . The wandering tribes descended from Abraham-called Hapirus-mingled with their new Canaanite (aka Phoenician) neighbors; slowly made their way into the Black Land of the Nile to escape famine; were enslaved by the native Egyptians when their Semitic relatives, the Hyksos, were driven from the pharaoh's throne; were liberated when one of their own, a man named Moses, received a call from their God; returned to the land of Canaan, their "Promised Land," with the goal of conquest; established a kingdom under Saul, and then the shepherd boy David; built a magnificent temple under the reign of David's son Solomon; watched all these accomplishments fade under one weak and corrupt king after another; and finally found themselves taken captive by the Babylonians. In short, we follow the rise and fall of the first great Jewish civilization, all while keeping in sight the religious thread that connects these victories and calamities. "The Israelites saw each of these crucial encounters between God and man through the fil

Published by Thriftbooks.com User , 15 years ago
Potok's History of the Jews is a powerful work that inspires, intrigues and challenges. He writes with graceful prose, has excellent research (footnotes would have helped but would have bogged down his natural style), offers sharp opinions, but keeps to his central theme. Catholic/Christian readers might object to its brutal description of countless persecutions without sufficient inclusion of Christian devotion and charity. The sections on Jesus and Paul are mostly good, but more could have been written about the Christian Gospels, especially John. Still, this is a history of the Jews, not the Christians. I learned a lot from this book, especially about the time periods after the common era. The book also does an excellent job in summarizing the stories given in scripture. Some of these stories are Potok's opinions, but most are reasonable interpretations. This is an excellent read.

This book should be required of any serious history student!

Published by Thriftbooks.com User , 22 years ago
This book is Potok's history of the Jews - specualtion based on archaelogy before recorded history and then on recorded history. It tells the story of the Jews and their wanderings and persecutions pretty thoroughly. While there might be some bias on Mr. Potok's part, there is no way to argue that these things did not happen. There are too many written records in the world. I was saddened to read of it and glad to know. I wish my parents had taught me these things. It gives one an enlightened understanding of the Jews.

Published by Thriftbooks.com User , 22 years ago
Potok's history of the Jews is flat-out the best-written history of any people I've ever read. Some of it sprawling and vast, other parts poetically sparse -- the 100 word passage on the Holocaust is one of the most heartrending in the English language -- the work is a sweeping review of history.Potok assumes truth in the scriptures, then goes to set the scene with copious bits of history. Even for those who reject Biblical stories, the scene-setting history is wonderful, and Potok's means of working in the thread of Biblical history gives a marvelous idea of what the history looks like to one who does believe.The only major problem is that the book is not properly footnoted, so it is difficult to follow up on Potok's sources if you want to go more deeply into any of the many subjects he brings up.

An excellent history of the Jewish people.

Published by Thriftbooks.com User , 24 years ago
Chaim Potok, as an excellent story teller, provides a detailed history of judism from Adam to Present, written in a flowing, story-teller fashion. The easiest way I know to get an interesting history of the Jewish people. An Excellent Book
Copyright © 2020 Thriftbooks.com Terms of Use | Privacy Policy | Do Not Sell My Personal Information | Accessibility Statement
ThriftBooks® and the ThriftBooks® logo are registered trademarks of Thrift Books Global, LLC