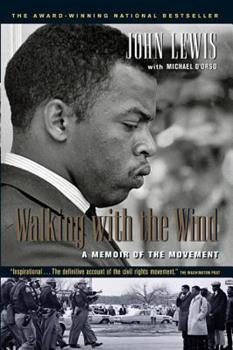 Walking with the Wind: A Memoir of the Movement

by John Lewis and Michael D'Orso

Congressman John Lewis takes readers inside the civil rights movement in Walking with the Wind and shares rare insight into the personalities at its heart. ? As Chairman of the Student Nonviolent Coordinating Committee (SNCC), Congressman John Lewis was at the epicenter of the civil rights movement in the late '50s and '60s. Arrested more than forty times, he was one of its youngest and most courageous leaders. Writing with charm, warmth, and honesty,...

Published by Gene L. , 1 year ago
An amazing individual. This part of our country’s recent past and needs to be taught in all schools. A revealing look at our embarrassing history and correlates to events that still plague our country. John Lewis is a true hero and magnificent human. Everyone should read this book.

The story of a true American hero

Published by Thriftbooks.com User , 19 years ago
John Lewis was seemingly everywhere during the Civil Rights Movement of the 1960's. From the Nashville Sit-Ins, to the Freedom Rides to the famous march from Selma and more. It is akin to someone having been at the Boston Tea Party, Lexington and Philadelphia on July 4, 1776. Not only was Lewis there but he was an active participant, one of the many brave souls who risked injury, even death to bring down segregation. Lewis knew all the key figures in the Movement, such as Dr. King, and was a leader himself. Today, of course, Lewis serves his country in the House of Representatives.It's hard to go wrong with such a compelling story to tell and Lewis doesn't dissapoint. With the help of co-author Michael D'Orso, we learn not only of one person's participation in the Civil Rights' Movement, but gain insight into the Movement as a whole.Lewis is vastly under appreciated by Americans today. Hopefully Waking With the Wind will help future generations appreciate John Lewis, an American hero.

A fascinating story full of strength and triumph

Published by Thriftbooks.com User , 20 years ago
The following is my review of the hardcover from the CNN website. "Walking With the Wind" holds up even better today. This is a must-read for those who are interested in the brave women and men who worked behind the scenes in the Civil Rights struggle.Walking With the Wind by John LewisReview by Robert Nebel (CNN) -- As a child, Georgia congressman John Lewis knew he was the "different seed" from the rest of his cotton farming family in 1940's Troy, Alabama. Like the orderly rows of cotton plants on the farm, Lewis felt his parents and siblings all too often "fell in line" and easily accepted the harsh Jim Crow segregation laws of the South. Even as a young boy, Lewis knew that he had to be the one to fall out of that orderly line and challenge the system -- a system that he felt kept those in his family and race from achieving their full potential. Little did Lewis know that by being "the different seed" he would one day be at the forefront of changing America's attitude toward race relations. That theme plays throughout Lewis' autobiography, "Walking With The Wind". Lewis starts out recounting a childhood filled with painful memories of separation, discrimination, degradation and isolation. Pages upon pages vividly describe separate facilities for African-Americans; violence against African-Americans; and southern legislators who were in cahoots with law enforcement officials who covered up countless wrongs against African-Americans. Going against the advice of his parents, Lewis embarked on a journey of challenging Jim Crow laws and later, attitudes through non-violent protest. The peaceful protest ideas sprouted and came to fruition for Lewis when he was a student in Nashville during the 1950's. It was there where he applied the teachings of Ghandi and his mentor, Martin Luther King Jr., to his life of non-violence including sit-ins and marches. It was only fitting that Lewis joined the civil rights movement soon after the Brown versus the Board of Education Supreme Court decision that tore down the Jim Crow laws. Unfortunately, many Southern states refused to comply with this federal mandate. That was where Lewis' true work began -- by joining and later becoming chairman of the Student Non-Violent Coordinating Committee. What sets "Walking With The Wind" apart from other civil rights stories is that it is not a rehash of the lives of the famous black leaders such as Martin Luther King Jr., Malcolm X, Andrew Young and Jesse Jackson. This book brings the unsung heroes to the forefront of the Freedom Rides, Selma's Bloody Sunday, the 1963 March on Washington, and the voter registrations drives in Mississippi. Names such as Diane Nash of the SNCC, and Fannie Lou Hamer in Mississippi, are just a few of the African-Americans who put their lives on the line to guarantee future generations of minorities basic human rights. What happened behind the scenes at the SNCC and the movement is the heart and soul of the book. While the students struggled w

Published by Thriftbooks.com User , 21 years ago
Uplifting. Eloquent. Brilliant. Inspiring. Patriotic. John Lewis' life story is the story of a genuine American hero. The depth and strength of his moral conviction shows what character can accomplish. This book, just as this man's life, cannot be overrated or over-appreciated.John Lewis, as a young man had the calling. His deeply religious upbringing ultimately led him to the Southern Christian Leadership Conference, and work with Rev. Martin Luther King. He sat in where Black people were not wanted. He demanded for Black people the rights to which all Americans have an expectation. He walked the walk at a time when it was not only unpopular, but downright death defying.He moved from the pulpit to the halls of Congress, where he serves to this day.As inspiring a work as I have ever read. Ought to be required reading by everyone in the Nation for a deeper understanding of the power of the American spirit.

Published by Thriftbooks.com User , 21 years ago
Each night I can't put "Walking With the Wind" down! Reading the autobiography of Congressman Lewis' life and work in the civil rights movement brought tears to my eyes and a heaviness of heart to realize that people hate their fellow man so much that they'd commit such acts of violence based solely on the way someone looks!Whenever I read a book like this, I think to myself: "Thank God someone went before me because I couldn't have done it!" The tremendous amount of bravery these people had is so inspirational and heart wrenching! Not knowing your enemey is one thing, but these people knew the enemy and what they were capable of and yet, they still persevered and triumphed. As an African American I am so proud of all those who sacrificed so very much, even sometimes making the ultimate sacrifice with their lives. Every American needs to realize the great courage these people exhibited to make this land a better place for us all.

The best memoir I've ever read

Published by Thriftbooks.com User , 21 years ago
I don't like memoirs. They're usually self-serving, ego-driven and full of cheap shots. Walking With the Wind is none of those. John Lewis and his co-author have crafted a marvelously told tale of the civil rights movement. Perhaps no one but Lewis, King and Abernathy could write about the movement with this scope. Lewis was there for all of it, from jails, to voting, to sit-ins. And he describes it beautifully with the perfect pace. I think the book's best chapters are the ones that cover what happened in Selma. I've read a half-dozen histories of the civil rights movement and none of them have recounted the Selma story better than Lewis does here. Lewis also gives us insight into several other movement leaders. Not even Taylor Branch (the Pulitzer-winning historian and journalist) tells us about Jim Bevel with this much color. Lewis tells fascinating stories about Diane Nash, Stokely Carmichael and the relations between SNCC and the other movement-leading groups. It's the kind of inside baseball a good memoir delivers.I'm thrilled that I read this book. It has greatly contributed to my understanding of the civil rights movement.
Copyright © 2020 Thriftbooks.com Terms of Use | Privacy Policy | Do Not Sell My Personal Information | Accessibility Statement
ThriftBooks® and the ThriftBooks® logo are registered trademarks of Thrift Books Global, LLC