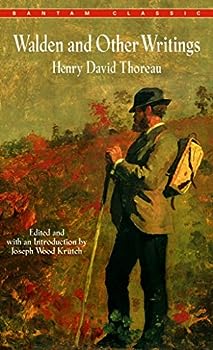 Walden and Other Writings

With their call for "simplicity, simplicity, simplicity ," for self-honesty, and for harmony with nature, the writings of Henry David Thoreau are perhaps the most influential philosophical works in... This description may be from another edition of this product.

Published by Rev. Vern Lovejoy , 1 year ago
I hope there are many negative and uneasy responses to Thoreau's Walden and his essay on Civil Disobedience, because that hostility means a sharp start -- let the hostiles come with sharpened knives and kick Thoreau's doors in. Let them try to defend their leaden, dull materialism.

Published by Thriftbooks.com User , 20 years ago
Thoreau is sometimes classified as a "nature writer", but his reflections extend into economics, politics, health, recreation, aesthetics, moral issues of personal character, fidelity to principle and self discipline, and to the very nature of reality and perception. He was a dominant figure in the Idealist school of philosophy labeled Transcendentalism. Emerson called Thoreau the truest American. This because of his passionate respect for the dignity of the individual. Years before the Emancipation Proclamation or the Civil War, more than a century before the American civil rights movement or the global push for 'human rights', there was Thoreau's Resistance to Civil Government, which is commonly titled Civil Disobedience. (Mahatma Gandhi acknowledged Thoreau's influence on his life as did Martin Luther King, Jr.). Several decades before the environmental movement was born and ecological awareness began to seep into public consciousness, while John Muir was but an infant, there was Walden. On issues of human dignity, moral consistency, environmental responsibility, even diet and health, he was as an unappreciated light in a gray world of small thinking. In his short life, he had rather few readers and was generally thought of as being a nutty malcontent, as has been the case for so many thinkers of antiquity and of today."The greater part of what my neighbors call good I believe in my soul to be bad," states Thoreau, who like other great Idealist thinkers insists that Truth and the crowd generally stand in opposition to one another. Solitude being the state in which one can "discern his proper objects," Thoreau's record at Walden Pond is a wonderful account of such discernment. In his opening treatise on economy, Thoreau says that philanthropy is esteemed so highly only because we are so selfish. It is in his less provocative yet careful analysis of objects of nature that Thoreau delights his reader. His account of a battle between an army of red ants and an army of black ants is meticulous and absolutely wonderful. This great work of American writing and philosophy is an invitation to hear the music of "a different drummer.""Our whole life is startlingly moral. There is never an instant's truce between virtue and vice. Goodness is the only investment that never fails."

Published by Thriftbooks.com User , 21 years ago
"I went to the woods because I wished to live deliberately," Thoreau writes in his most familiar work, WALDEN, "to front only the essential facts of life, and to see if I could not learn what it had to teach, and not, when I came to die, discover that I had not lived. I did not wish to live what was not life, living is so dear; nor did I wish to practise resignation, unless it was quite necessary. I wanted to live deep and suck out all the marrow of life, to live so sturdily and Spartan-like as to put to rout all that was not life, to cut a broad swath and shave close, to drive life into a corner, and reduce it to its lowest terms, and, if it proved to be mean, why then to get to the whole and genuine meanness of it, and publish its meanness to the world; or if it were sublime, to know it by experience, and be able to give a true account of it in my next excursion" (p. 86). These were the words that forever changed my life when I first read WALDEN more than twenty years ago. I have since returned to WALDEN more than any other book.Recently reading another Modern Library Paperback Classic, THE ESSENTIAL WRITINGS OF RALPH WALDO EMERSON, prompted me to revisit Thoreau in this new paperback edition of his collected writings. It opens with a revealing biographical Introduction to Thoreau (1817-1862) by his friend, Emerson. Thoreau "was bred to no profession, he never married" Emerson writes; "he lived alone; he never went to church; he never voted; he refused to pay a tax to the State; he ate no flesh, he drank no wine, he never knew the use of tobacco; and, though a naturalist, he used neither trap nor gun. He chose, wisely no doubt for himself, to be the bachelor of thought and Nature. He had no talent for wealth, and knew how to be poor without the least hint of squalor or inelegance" (p. xiii). This 802-page edition includes WALDEN in its entirety, together with other writings one would expect to find here, A WEEK ON THE CONCORD AND MERRIMACK RIVERS, "Walking," and "Civil Disobedience," among others."The mass of men lead lives of quiet desparation" (p. 8), Thoreau wrote in 1854. Few would disagree that WALDEN remains relevant today. "Most men, even in this comparatively free country" Thoreau observed more than 150 years ago, "through mere ignorance and mistake, are so occupied with the factitious cares and superfluously coarse labors of life that its finer fruits cannot be plucked by them. Their fingers, from excessive toil, are too clumsy and tremble too much for that" (p. 6). "Our life is frittered away by detail" (p. 86); Thoreau encourages us to "Simplify, simplify" (p. 87). "To be awake is to be alive," he tells us (p. 85). "If a man does not keep pace with his companions, perhaps it is because he hears a different drummer. Let him step to the music which he hears, however measured or far away. It is not important that he should mature as soon as an apple tree or an oak" (p. 305). Truth be told, WALDEN is as much a about a state of mind as th

Published by Thriftbooks.com User , 21 years ago
As a professor of philosophy, I at one time regularly took classes of first year college students to Concord for a week-long intensive seminar on Emerson and Thoreau. I eventually abandoned the seminar, because I discovered that each class was progressively more hostile to what these two wonderful persons stood for. The ..... reviews written by young people of this edition of _Walden_ are, then, disconcertingly familiar to me. I obviously disagree with their evaluations of the book and of Thoreau's character. But what's interesting is why they have such a negative reaction to a book written, as Thoreau says, for young people who haven't yet been corrupted by society. What is it about the culture in which we live that encourages such hostility to his eloquent plea for simplicity? It's too facile to suggest that the backlash is motivated only by resentful pique at what's seen as Thoreau's condemnation of contemporary lifestyles, although I suspect this is part of the explanation. I'd be interested in reading the thoughts here of other readers who are likewise puzzled and disturbed by "Generation Y's" negative response to Thoreau.

A questioning of life

Published by Thriftbooks.com User , 22 years ago
Thoreau masterfully analyzes his in its purest form, he does away his all superfluous details. He forces the read to question his own existence. He forces the reader to imagine life without technology, commotion and anything unnecessary. Besides his analysis in Walden, he takes a stand for the maverick, for the individual, for the non-conformist. Lastly his social commentary especially about slavery shows how wrong our coutry had been.
Trustpilot
Copyright © 2022 Thriftbooks.com Terms of Use | Privacy Policy | Do Not Sell or Share My Personal Information | Accessibility Statement
ThriftBooks® and the ThriftBooks® logo are registered trademarks of Thrift Books Global, LLC