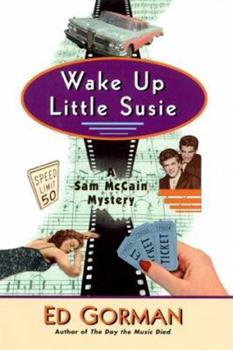 (Book #2 in the Sam McCain Series)

In 1958 Ford introduced the Edsel to America. In the Black River Falls, Iowa, the dead body of a 19 year old girl in the trunk of a brand new Edsel upstages the ill-fated car. Sam McCain makes some troubling discoveries as he tracks down the murderer.

Published by Thriftbooks.com User , 12 years ago
Ed Gorman's McCain series scores the biggest hit with this reader (so far) with this little gem that features some of the best dialogue exchanges in recent memory. I laughed out loud twice on the ferry when McCain was having at it with his nemesis (Sheriff Sykes) and then again with his boss, the hot, hard drinking, very class conscious, conservative, name dropping, judge (who shoots a mean rubber band and is McCain's boss). The characters in Gorman's Black Falls are wonderful and so is the repartee throughout each book. I thought this was the most fun to read so far (I'm 3 books in now) and look forward to the rest of the series. We all need to READ amici ... so get to it ... you won't be disappointed with this series. It's a lot of fun.

A Blast to the Past

Published by Thriftbooks.com User , 12 years ago
It's a day Sam McCain and other car enthusiasts have been looking forward to for a while. The Ford Motor Company is releasing their new design, the Edsel, in dealerships all over the country. But it turns out the design is less than appealing. The real shock in this small Iowa town, however, is the body that is found in the trunk of one of the models. Susan Squires was the second wife of David Squires, another ambitious attorney in town. A part time PI, Sam is asked to look into the murder and beat the crooked chief of police. Does he have what it takes to find the killer? I may not have lived during the 50's, but this book was a fun nostalgic journey to the not so distant past. References to pop culture long gone made me smile. Sam is a smart, likable lead, with the exception of his love life. I had a hard time keeping all the characters straight at first, but once I did, they began to stand out to me as well. The mystery was good with a few nice twists along the way. I never would have figured out the villain without Sam's help. Those who enjoy history or live through the decade will enjoy this trip back in time.

Fun in the Fifties

Published by Thriftbooks.com User , 20 years ago
What could be better than life in Black River Falls, Iowa on a September Saturday in 1957? The new car of the future, the Edsel, is being introduced to the town at the local Ford dealership and there's balloons, hog callers and marching bands, baton twirlers, cub scouts and tap-dancing twins. Unfortunately, there's also the dead body of Susan Squires in the trunk of one of the new Edsels. Sam McCain, a young lawyer who's earning most of his income with his private investigator's license, is asked to look into the murder. In no time, he's got way too many suspects, among them the victim's husband, David. But, soon David turns up dead too and McCain's highschool honey, Mary, goes missing and Sam sets out on a mission to solve the case and find his sweetheart, before it's too late..... Ed Gorman has written an entertaining mystery that will transport you back to those nostalgic days of the 1950s. His writing is crisp and smart and full of witty and irreverent dialogue; his plot, tense and full of surprises and his scenes, vivid and at times, laugh-out loud funny. But it's Mr Gorman's characters that are the real strength of this novel. From the brandy sipping, cigarette smoking, rubberband shooting judge to the fat, bully of a sherriff with a skin condition, who only got the job because his father runs the town, to McCain's best friend, Jeff who's backing out of his engagement because his fiance might not be a virgin, this is a cast of unrivaled, quirky denizens you won't soon forget. Wake Up Little Susie is the second book of a terrific new series, full of small town detail and 1950's wisdom, that shouldn't be missed.

Published by Thriftbooks.com User , 21 years ago
This is a fun book, with a novel story line, great humor and a credible small-town mess of characters. The fun is in the reading, not in detecting. The author is not absolutely surefooted about his time period of 1957, but who cares? Good reading with a gin and tonic in hand.

Published by Thriftbooks.com User , 21 years ago
This prequel to The Day the Music Died isn't quite as good as the first book, but it's still very, very good. As usual, Gorman creates a fantastic, vivid cast of characters, each with their own particular quirks that place them just left of center, and sets them all down in a compelling murder mystery. The period detail seems to capture the 50s without being heavy-handed. Let's hope there are many more Sam McCain novels to come in the future.
Copyright © 2020 Thriftbooks.com Terms of Use | Privacy Policy | Do Not Sell My Personal Information | Accessibility Statement
ThriftBooks® and the ThriftBooks® logo are registered trademarks of Thrift Books Global, LLC