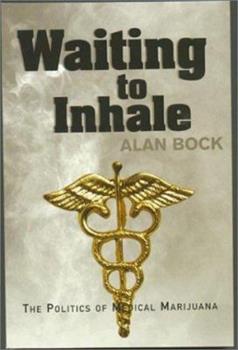 Waiting to Inhale - The Politics of Medical Marijuana

Voters across America are passing legislation that allows the possession, cultivation, and use of marijuana for medical purposes. Despite the popular support for such legislation, officials continue to resist its implementation. Waiting to Inhale reveals the whole story about medical marijuana.

A guide to get your hands dirty on a 356

Published by Thriftbooks.com User , 17 years ago
It's a compreensive guide to do it yourself but in some tasks there are big steps that require a good backup from the reader to see all the picture. Has lots of important information on where to look at when buying or evaluating a 356 restoration project. I would recommend this book to everybody looking for a 356 restoration project and not necessarily in a DYI point of view.

Published by Thriftbooks.com User , 18 years ago
Alan Bock is a writer for the Orange County (CA) Register and an advocate for medical marijuana. I had the pleasure of meeting Mr. Bock at a convention where he signed a copy of this book for me. I had heard of Bock before, and based on what I knew, I was confident that his book would be a good one. Bock dissects the medical marijuana issue, talking about the different initiatives that have come before the voters, the activists who helped get them on the ballot, the problem of effective distribution, and the interesting methods used by opposition forces to bring them down. Bock explains the history of this plant as a drug, reminding everyone how marijuana once was an ordinary, acceptable prescription drug used to treat many different ailments and how the federal governments' anti- marijuana propaganda was used to turn this relatively harmless drug into a Schedule 1, forbidden fruit substance- the same classification that includes heroin and crack.This book has many memorable parts that get you thinking, but I think my personal favorites are the chapters that talk about the reaction by the feds when each medical marijuana initiative passed its respective states. In each instance, when placed before the voters, the people have responded in decisive fashion, voting to allow the use of marijuana for medical purposes. And in each case, the feds reacted in a rather strange way. Instead of acknowledging the will of the people, Bock points out in the book that they tried to brush it off, claiming that the people had been "duped". This is a very weird reaction, and I think it speaks volumes. It shows that the feds had no intelligent argument against medical marijuana and had to resort to, in essence, a form of name calling. It was a sour grapes- type response, and it showed that the feds were just irritated that the public didn't fall for its propaganda anymore. Bock is obviously on the side of the medical marijuana patients, but he still manages to show objectivity in his analysis and conclusions. He agrees that some of the opponents' concerns could be valid, but then he quickly explains why they are unfounded, offering evidence to back up his pro- medical marijuana stance. "Waiting to Inhale" is, overall, a very well- thought out, very intelligent book from journalist Alan Bock. It effectively discusses the past, present, and future ramifications of medical marijuana as a prescription drug and its place in society. It's a good book for all to read, particularly social conservatives who think there is no practical use for this black- market drug.

Not Just A High

Published by Thriftbooks.com User , 20 years ago
Alan Bock, senior editorial writer for the Orange County Register, knows marijuana. Bock has covered California's medical marijuana initiative, Proposition 215, since the movement began in 1996. His book, Waiting to Inhale, gives its readers a smoking inside look at the forces behind the movement to give medical patients access to the legal use of marijuana.Bock leads us through a journey that begins with his sporadic involvement covering hemp and marijuana reform issues, and centers on the campaign to pass Proposition 215, the Medical Marijuana Act. In 1995, California patient-activists began the process to legalize the medical use of marijuana, and later enlisted the help of East Coast pros and big-money entrepreneurs such as George Soros. Facing opposition from just about every aspect of government, including most Federal, State, and local agencies, Proposition 215 passed, and the obstacle then became one of implementation in the face of bureaucratic and law enforcement tyranny.The voters of California had spoken. And clearly, they decided that no drug enforcement issues should stand in the way of medical patients who found that smoking a joint -- in private, on their own property -- could bring pain relief and a better quality of life.Immediately upon passage of the referendum, the drug war movement went into action. "Drug czar" General Barry McCaffrey threatened the arrest of doctors recommending marijuana; former czar William Bennett claimed stupidity on the part of the voting public for passing such a referendum; and the entire neocon-right asserted the for the children morality argument against "drugs".The issue of implementation soon became a question of State's rights vs. federal usurpation of powers. Most staggering is the blatant abuse of federal powers in sustaining a block on the implementation of State laws through the use of bureaucratic and administrative procedures. In addition, the IRS promised to torment doctors prescribing marijuana while Orrin Hatch's Senate Judiciary Committee held hearings to battle the legality of the California law. Bill Clinton's bevy of antagonists included Janet Reno and Donna Shalala, both avowed leftists that clashed against their own kind; clearly, sustenance of a federal mastery over the behavior of its minions superceded a politically incorrect freedom-for-pot-smokers movement. In continued opposition, the feds stood in the way of the use, distribution, and sale of medical marijuana. Federal controls on marijuana meant that California had passed a law but it could not be implemented by state agencies. In fact, the DEA raided medical marijuana distributors that adhered to state laws for the distribution of prescribed marijuana. Also, individuals were arrested at will for growing their own pot for their own prescribed use, which state law allowed. Therefore, the state was powerless against the feds.Even where the feds were not present, some of the locals fought implementation, as judges

Published by Thriftbooks.com User , 21 years ago
This is from the author, so take the stars with a grain of salt. The main story the book tells is of California's halting and inconsistent efforts to implement Prop. 215, the 1996 initiative that allows patients with a recommendation from a licensed physician to possess, use and cultivate cannabis or marijuana. Some local jurisdictions moved quickly to set up patient registration systems in cooperation with local medical marijuana activists, while other local DAs opposed the initiative so strongly that they brought prosecutions designed to show it couldn't possibly work. As an editorial writer and columnist for the Orange County Register for 20 years I followed the controversy from the inception, attending several trials and interviewing most of the principals, from two California Attorneys General to patients all over the state. Eventually I had too much information for newspaper articles so I wrote the book. It also includes chapters on the socio-political forces that led to the passage of 215, on the scientific evidence for therapeutic uses of cannabis, on the history of the medical marijuana movement from the 1970s, on initiatives in other states and disputes among activists, and on why opposition is so fierce. A chapter analyzes the federal scheduling system for controlled substances, another sets up the U.S. Supreme Court medical marijuana case (I attended the oral arguments March 28), and another features pioneers on the frontiers of medicinal marijuana. Among those kind enough to provide endorsements for the book are John Stossel, Milton Friedman, former San Jose police chief Joe McNamara, Chapman University president James Doti, Dr. Tod Mikuriya of Berkeley, Cato Institute vice president David Boaz, Republican Rep. Tom Campbell, Democratic state Sen. John Vasconcellos, author James Bovard, Sir Eldon Griffiths, national chairman of the World Affairs Council, life extension scientists Durk Pearson and Sandy Shaw, and Jane Marcus, Phd, of Beth Am Women and Women of Reform Judaism. Marijuana is just a plant, one might say, but culturally and socially it is more than just a plant in modern America. If this book helps to demystify some of the issues surrounding the medicinal use of cannabis and gives patients enough information to begin a more personal inquiry into whether this medicine might help them safely it will have served its purpose.

A Timely and Exeptional Work

Published by Thriftbooks.com User , 21 years ago
Mr. Bock addresses both the political and philosophical argument in favor of freedom, both medical and political, in this consise book. He was evidently on the front lines and his reporter-like analysis is thorough and researched. All legislators, especially so-called "conservatives" need to get a copy of this book and read what it means to have the people stand for what they believe and work towards that goal peacefully and legally, and to see what government and its agents really do to stifle freedom and kill people. Please tell your friends about this book...
Trustpilot
Copyright © 2022 Thriftbooks.com Terms of Use | Privacy Policy | Do Not Sell My Personal Information | Cookie Preferences | Accessibility Statement
ThriftBooks® and the ThriftBooks® logo are registered trademarks of Thrift Books Global, LLC