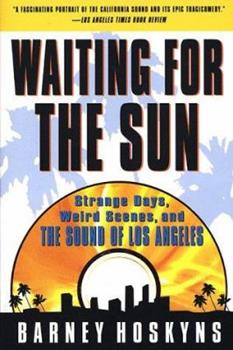 Waiting for the Sun

This description may be from another edition of this product. A classic, finally back in print British rock historian Barney Hoskyns (Hotel California, Across the Great Divide: The Band in America) examines the long and twisted rock 'n' roll history of Los...

Waiting for the Sun

Published by Thriftbooks.com User , 12 years ago
Very good book. It offers a lot of insight into the 60's life in L.A. It is believable and takes you back to that great time when music was being made at its best.

Published by Thriftbooks.com User , 15 years ago
You know you have a great rock book when it manages you to get interested in a subject you do not really like such as the LA rock scene (in my case)...Anyway Hoskins writes in the typically excellent way most NME writers do and have done and has managed to get me interested in this very important rock scene which i before knew very very little about. Like most british rock essays it is somewhat pretentious and over-exhaustive but then you are not dissappointed at all.

An excellent overview of 50 years of LA music

Published by Thriftbooks.com User , 20 years ago
Barney Hoskyns' "Waiting for the Sun" is a superbly written and illustrated history of the Los Angeles music scene from the Second World War through the early nineties. There aren't many really good books about popular music around, but this is one of them; in fact, I'd say it's the best book yet written about a music "scene" (as opposed to a particular artist), even better than Jon Savage's "England's Dreaming," which recounts the explosion of punk in the U.K. in the 1970's.The story moves effortlessly through the progression of musical styles that have flourished and often cross-pollinated each other in Southern California -- small-combo jazz, R & B, early rock & roll, surf music, folk-rock, psychedelia, country rock, heavy metal, punk and rap. The book includes lively portraits of the many famous (and infamous) people who have been a part of it, like Phil Spector, Ricky Nelson, Sam Cooke, David Crosby, Neil Young, Sonny Bono, the Beach Boys, Jim Morrison, Gram Parsons, Charles Manson, Randy Newman, Steely Dan, X and NWA, but also discusses many talented people who never quite made it to the big time, or who lost their way before realizing their full potential. Hoskyns is quite good in describing the business side of the music scene, and in relating events outside the music scene (for example, the booming aerospace industry, the surfing craze, the development of a "San Francisco sound," and the riots of 1965 and 1992) that had a significant impact on it.In tracing the development of popular music in LA, Hoskyns makes the key point -- though this is hardly news -- that no musical style remains popular very long, and even the most creative and versatile artists simply can't stay on top for more than a couple of years. A handful of artists (Neil Young and Joni Mitchell come to mind) do manage to hold onto a significant audience throughout their careers, but few artists have their level of talent and dedication, and seem to do better by going into production, or management, or the movies, or politics (like Sonny Bono), than trying to rely on an outmoded musical formula.Another key point is that during the sixties, Los Angeles became the popular music capital of the U.S., if not the world. Los Angeles' preeminence in the industry may be a given now, but even as late as the mid-sixties, many of the top groups lived and worked in New York, Detroit, New Orleans, and elsewhere; as Hoskyns documents, a lively club scene, big-name entertainment companies, sun and palm trees, and growing ranks of like-minded artists, all combined to make the region the entertainment mecca it is today.This book contains a few small errors, such as repeatedly referring to "Huntingdon" rather than "Huntington" Beach, and ascribing several different publication years to Mike Davis' "City of Quartz," another fine book about Southern California. I also don't understand the significance of the book's lame title, except that it was also the title of the Doors' generally l

Published by Thriftbooks.com User , 22 years ago
I loved this book, and you might love it also if you can manage to step over its many steaming diatribes against what Barney Hoskyns considers to be racism based on corrupt capitalism.For example, the Beach Boys' early emphasis on surfing, sun, and fun on the beach is, to Hoskyns, somehow an Aryan fantasy nearly worthy of Adolf Hitler. For Hoskyns there's apparently a racist in almost every woodpile, and most of the woodpiles are owned by evil capitalists.But the book happens to be a really good, richly detailed history of popular music in LA, well worth reading. The many photographs are terrific. It was amazing to read the descriptions of the very hot jazz scene in south central LA in the 30s and 40s, and I was fascinated by how surf music gave way to the mid-60s hippie scene, and how that scene became poisoned with drugs and many other things, including none other than Charles Manson. There's a wealth of juicy quotes from all kinds of people.Hoskyns is a very good writer, is very witty and acerbic in his observations, and his apparent familiarity with the music and the people are exceptional. Plus, the book is very well-edited. I don't recall a single typo, although it's full of goofy British spellings and expressions, things like calling a beeper a "bleeper." But it adds to the book's charm. Hoskyns obviously worked hard and long on this, and it's really enjoyable.

Published by Thriftbooks.com User , 23 years ago
"Waiting for the Sun" is an intelligent, informative, and very entertaining critical history of the Los Angeles pop music scene from the late 1940s through the 1990s. Real-life characters as diverse as Jim Morrison, Brian Wilson, Neil Young, Henry Rollins, Sly Stone, Kim Fowley, John Phillips, Ice Cube, Phil Spector, Axl Rose, Lou Adler, Charles Manson, Rick Nelson, and James Ellroy (and others too numerous to mention) are discussed and examined, painting a nightmarish portrait of Los Angeles as a city of dreams and decadence. Highly recommended for pop music fans, cultural historians, and those fascinated with the noir-ish allure of the City of Angels.
Copyright © 2020 Thriftbooks.com Terms of Use | Privacy Policy | Do Not Sell My Personal Information | Accessibility Statement
ThriftBooks® and the ThriftBooks® logo are registered trademarks of Thrift Books Global, LLC