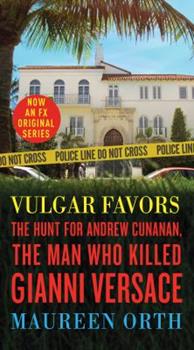 Vulgar Favors: The Hunt for Andrew Cunanan, the Man Who Killed Gianni Versace

Read the true story of the manhunt that inspired The Assassination of Gianni Versace: American Crime Story, the acclaimed FX series. "The breadth and thoroughness of [Maureen] Orth's research are often staggering."--The New York Times "Fascinating . . . ripe with chilling detail."--Entertainment Weekly On July 15, 1997, Gianni Versace was shot and killed on the steps of his Miami Beach mansion by serial killer Andrew Cunanan. But months before Versace's...

Published by Thriftbooks.com User , 21 years ago
If ever there was a case that calls for an adept and lengthy analysis, this is it. Andrew Cunanan is one of the most bizarre and elusive criminals of the modern era, and this is a marvelous study of his personal history and his crimes. Maureen Orth is an experienced jouralist who began investigating Cunanan in the midst of his crime spree. Her account benefits from having actually experienced all the false leads and baseless conjecture that tainted the criminal investigation as it was happening. She does a thorough job of digging through Cunanan's childhood and the exclusive gay world he deliberately sought to infiltrate. You can't help but conclude that there never was a "real" Andrew Cunanan; he was never anything more than a series of self-invented masks. Orth does an equally comprehensive study of the first two victims, Jeff Trail and David Madson. Frustratingly, both she and the professionals are unable to come to any conclusions as to what really happened with the two murders. Lee Miglin's murder is even more mysterious. Orth largely avoids sensationalistic theorizing as to why Miglin was selected as a victim. In constrast, Cunanan's reasons for selecting the next two victims, Bill Reese and Giovani Versace, are readily apparent but no less disturbing. The absolute conclusion one can draw from the book is that Cunanan was a conscienceless sociopath and egomaniac. A truly sad and shocking story.

Published by Thriftbooks.com User , 22 years ago
Like most, I thought I had gleaned all the major facts of the Cunanan killings through press reports. However, Orth's book, like the case itself, went so much deeper that I was stunned. I spent hours riveted to this incredibly detailed account of what really went on in San Diego, Chicago, Florida... all the stuff about Versace that was buried or ommitted in mainstream press, the revelations concerning the cops' utter failure, and the still unanswered questions about exactly who wanted Versace dead. Brilliantly researched, objectively written, and not in the least condescending to the homosexual community.

Published by Thriftbooks.com User , 23 years ago
Ms. Orth has carried on in the tradition set down by Truman Capote ("In Cold Blood") and Norman Mailer ("The Executioner's Song"). Orth lays bare the progression of Cunanan's pathology with a chillingly subtle scalpel. The evil that is exposed thus has had disturbingly frequent manifestations subsequently, such as in the murders of Matthew Shepard and of the unfortunate victims at Columbine H.S. The path from Cunanan's inventions of his past history in San Diego to his total lack of investment in either past or future when he casually self-identifies himself as serial killer in Miami is surely the road to Hell, on which journey the transformation from human to monster is completed. The only salient common elements to such diabolic metamorphoses are their beginning points, i.e., a human being, and complete alienation and lack of concern for consequences at the end, at which point the new creation seems generally beyond redemption.Now it seems apt to compare what happens when an individual becomes a brute, as Ms. Orth so skillfully portrays, with what happens when the same phenomenon occurs on a mass scale, as described, for instance, in Hannah Arendt's "Eichmann in Jerusalem" and in the histories of Kosovo that will be written.

Published by Thriftbooks.com User , 23 years ago
If you haven't read Vulgar Favors, Special Correspondent to Vanity Fair Maureen Orth s first book, you are missing a treasure. It is a book of many things, most importantly a mini-biography of the life of Andrew Cunanan, the serial killer who ended his killing spree with the murder of world famous fashion designer Gianni Versace. It is also, however, a crime story with an inside, not always pretty, look at the process of investigation and the cooperation or lack thereof among investigative agencies, and a look at the gay community in the United States at the end of the 20th century, including and especially what many would call the underbelly of gay life where drug use and extreme sex practices predominate. It is even a travelogue, almost James Bondish like, as Ms. Orth traces and follows the trail of Cunanan's killings from the west coast to the midwest to the northeast to the southeast. Someone needs to do a similar sotry on the underbelly of heterosexual life in the United States.The book is thoroughly researched and shines a bright light on an investigative process that came up short too many times, with the ultimate result of the loss of two lives that most likely could have been saved. In this respect, Ms. Orth shows that mistakes in the investigative process were not necessarily the only problem resulting in the unnecessary loss of life. She shows how the media may also have contributed to the loss of at least one of those lives. She shows that a lack of communication between investigative agencies but also between such agencies and the gay community, is not in the best interest of either group. Over and over she points out the damage done by what most people would consider the inane trial and miscarriage of justice in the OJ Simpson affair. The dread of repeating the investigative "mistakes" claimed by the lawyres in that trial may have contributed to unneeded deaths in this and, for all I know, other situations as well.In the end one is left, like the families of the murder victims, with a profound sense of sadness at the unnecessary waste of lives. Orth needs to be congratulated for a great job.

Published by Thriftbooks.com User , 23 years ago
As an interviewee of Maureen Orth's, I awaited the publication of this book with great anticipation and reluctance that she might not "get it right". I am left with great insight to a situation for which I previously had little understanding and I am finally able to start putting the events of a nightmarish summer to rest. I knew Andrew Cunanan over a period of approximately 3 years. At some point, I realized that he was an incredible liar who would buy his way into people's good graces. However, I was unable to figure him out or to discern where his lies ended and where the truthful stories began regarding his own life. When he started his murder spree by killing a good friend of mine, I was at a total loss to understand any of the events surrounding the murder.Maureen Orth's book explains Andrew Cunanan in a way that makes sense to me. The detail from her thorough investigation and the interviews with members of Andrew's family paint a hauntingly accurate picture of a most disturbed person. I liked Andrew at one time. I grew to dislike him during our fairly intimate acquaintanceship. I ended up hating him for killing someone that I cared about. Now, as a result of Maureen Orth's book, I finally have an understanding of him and pity the person he was. This book is an excellent read for anyone who is interested in understanding the surreal events surrounding these murders. It is far superior to the fictional book by Gary Indiana on this subject.
Trustpilot
Copyright © 2022 Thriftbooks.com Terms of Use | Privacy Policy | Do Not Sell My Personal Information | Cookie Preferences | Accessibility Statement
ThriftBooks® and the ThriftBooks® logo are registered trademarks of Thrift Books Global, LLC