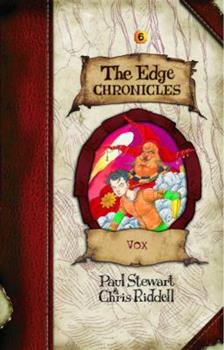 by Paul Stewart and Chris Riddell

In the second novel in the Rook Barkwater sequence, the young knight librarian attempts to stop the dark might of the Most High Academe. High in the crumbling Palace of Statues, oily Vox Verlix is brewing a terrible plot to take over power in Edgeworld once again. Can Rook foil Vox's plan and save the lives of his librarian colleagues?

Published by Thriftbooks.com User , 14 years ago
PROS Stunning Illustrations Great storyline More action packed, great for boy readers. CONS Vox himself actually plays a pretty small part in the overall story It can be a bit creepy at some parts.

Published by Thriftbooks.com User , 16 years ago
The Edge Chronicles Book #6, Vox, was packed with action. There is a ton of fighting using bow-and-arrows, talons, and knives. On page 359 in the hardcover edition, there is part of a word missing. The sentence is, "Slashtalon leaped forwards, all four sets of talo slashing at once." There is the word talo instead of talons. Other than that, the book is excellent.

Published by Thriftbooks.com User , 17 years ago
In the darkest and most complex Edge Chronicle ever, Vox Verlix plots away in his crumbling tower, seeing all, watching all, and waiting for his chance for revenge against those that betrayed him. Possessor of the title of Most High Academe by methods not quite orthodox, Vox is now a prisoner of his own machinations, his greatest triumphs usurped by those he once trusted. The hero of this book is again young Rook, the librarian-knight from book five. Captured after losing his precious Stormhornet sky-craft while on patrol, he is sold into slavery and ends up in Vox's palace, as an assistant to Hestera Spikesap, an exciting new character with a lot going on in her kitchen and heart. He meets the other minions of Vox - Speegspeel the goblin servant, Amberfuce the ghost-waif, and Flambusia, Amberfuce's nurse, and manages to get himself in the middle of most of the action which springs up in every chapter. Judging from the signs in the sky, a huge storm is brewing, which the Guardians of the Night believe will cure the stone sickness which has devastated New Sanctaphrax. The natives are restless also, and it doesn't take much prompting to set Shrikes and Goblins against each other in a huge battle in the sewers beneath Undertown. There's more violence than usual in this one, and several mentions of the smell of unwashed bodies of various species. It's also not as well thought out as the others, as major plot points happen too often by either chance or carelessness. There are stories running concurrently that are sometimes hard to tie together, and lots of loose ends. There's even romance in the air along with the usual imaginative cast of creatures, but as usual, the illustrations truly bring the book to life. Not the best in the series, but packed with action and well worth reading. Amanda Richards, October 9, 2005

Published by Thriftbooks.com User , 17 years ago
Relatively young Librarian Knight Rook Barkwater flying the Stormhornet completes his aerial patrol of the Edge that overlooks the Edgewater River. He begins to head back to the library to report the usual strange lights in the sky and mutants in Screetown, but observes columns of Shrykes on Great Mire Road as if the aviary creatures were preparing for war. However before he attains the haven of the Library, he hears a roaring noise and suddenly Stormhornet spins out of control. He crashes in Screetown where his escape fails and he becomes a prisoner. He is taken to the sunken Palace of the Statues, home or prison depending on one's view of the fallen tyrant Vox Verlix. Though exiled and not remotely like the greatest librarian of all times, Vox remains a force to be reckoned with albeit no one believes that. He warns his former compatriots that a storm is coming, but will they listen to an insane fallen one? Though Rook believes him having observed the lucid moments of his "host", what can he do even if he manages to escape being somewhat a novice. Fans of Potter will enjoy the Edge Chronicles; especially the books containing the adventures of Rook (see LAST OF THE SKYPIRATES). Rook is a terrific lead character who holds the tale in focus, but Vox is the fascinating one as the audience will wonder whether he warns out of duty or spite. Though this tale can stand alone, most fans will find it even better by reading at least beforehand LAST OF THE SKYPIRATES to gain a better understanding of motives and how far Rook has come. Still this is a fine edge of the seat young adult fantasy thriller. Harriet Klausner

Published by Thriftbooks.com User , 17 years ago
I have just finished reading Vox, the sixth book in the Edge Chronicles series by Paul Stewart (and illustrated with astounding talent by Chris Riddle), and I am speechless. This review is not so much a review of the sixth book alone, but for the entire series so far. The Edge Chronicles is one of the most daring and wonderful series of books I have ever read. The vision for these books as set forth by Paul Stewart and captured by Chris Riddle in his illustrations is unlike any I have encountered. They are original, exciting and daring stories that are not afraid to tackle tough issues like death and loyalty (or lack thereof). The heroes sometimes fail through good intentions (Twig's journey seems Odyssean when you sum it up and ultimately tragic). Quint's precludes are exciting but already knowing what happens later are underscored with "sweet sorrow." You can see the span of the lives you have come to love and feel the bittersweet beauty of them. The world they inhabit is incredible and so well described, I find it hard to believe that Edgeworld only exists in our imaginations. This world does not remain stagnant, unchanging, but evolves like any other world, and not always for the better. This world-change culminates in an exciting adventure involving our intrepid librarian-knight Rook Barkwater in the sixth book, Vox. This book does not disappoint, but colors the Edgeworld in more vibrant detail. I absolutely cannot wait for the next book, Freeglader, to come out!
Trustpilot
Copyright © 2022 Thriftbooks.com Terms of Use | Privacy Policy | Do Not Sell or Share My Personal Information | Accessibility Statement
ThriftBooks® and the ThriftBooks® logo are registered trademarks of Thrift Books Global, LLC