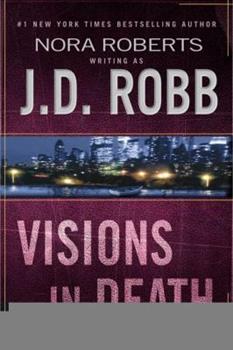 A brand-new novel in the number-one New York Times-bestselling In Deathseries set in 2059 New York City. As technology and humanity collide, Detective Eve Dallas searches the darkest corners of Manhattan for an elusive killer with a passion for collecting souls... On one of the city's hottest nights, New York Police Lieutenant Eve Dallas is sent to Central Park-and into a hellish new investigation. The victim is found on the rocks, just above the...

Published by Thriftbooks.com User , 16 years ago
I guess I'm hooked. I read everyone of J.D. Robb's books as soon as they make their way to paperback. They are always a quality, gripping read. No exception with this 19th installment. With each book the relationships of the central characters deepen. This novel focuses on Dallas and her relationship with her longtime partner, Detective Peabody. Eve and Roarke continue to harmonize and share adventures. This series of books is solid, and like most mystery readers I appreciate it when the writer takes the time to grow the characters and keep the plot turns interesting.

Published by Thriftbooks.com User , 17 years ago
I have read and re-read all of the "In Death" series and am never disappointed. I just finished this latest from JD Robb and as usual did so in record time as I am unable to put them down once I begin. I don't understand the negative criticism of other reviewers. If you are a fan of the series, you will enjoy this book as it runs true to form. I love following the characters and their relationships with each other as their lives unfold in each book. I think Nora Roberts aka JD Robb is a remarkable writer and her characters never fail to pull me into their world.

Robb's latest installment is like a visit from an old friend

Published by Thriftbooks.com User , 17 years ago
It's back to the future again and J.D. Robb, aka Nora Roberts, has put exactly the right mix of romance and mystery into her latest installment of the "Death" novels. Sometimes, a series can get stale after an author pumps out so many. Here, J.D. Robb proves that she is nowhere near her limit. In VISIONS IN DEATH, she ratchets up the tension with a death grip on her readers. Lt. Eve Dallas is still cracking wise as she deals with her subordinates in the New York Police and Security Department --- and the world in general. Her partner, Delia Peabody, has grown into a superb foil for Dallas, with witty comebacks that often earn her withering looks from the lieutenant. This time, however, they both need the levity their repartee creates, particularly with a brutal serial killer on the loose in their city. His profile depicts him as an especially vicious murderer, raping and mutilating his prey in an escalating rage. Each victim weighs personally on Dallas, leaving her with a load of guilt and dredging up nasty memories from her childhood. The sooner she captures this guy, the easier she will rest --- at least until the next big case. Along with Detective Peabody and the usual forensics team, Eve's multi-billionaire husband, Roarke, assists with the investigation whenever possible. He can do things best not talked about down at NYPSD. His invaluable help, though, is most welcome. And it sort of keeps the couple together --- and keeps readers loving them. Theirs is a relationship that just gets enviably steamier. One can't help but marvel at their love. Reading VISIONS IN DEATH is like visiting an old friend --- a surly, often testy old friend, but an old friend nonetheless. I'm not sure if Robb's style has smoothed out, if the plot is a particularly engaging one, or if it is just a comfortable tale to curl up with on a string of hot summer days --- but I found myself totally addicted to this one. Don't be tempted to rush through the ending, either. You might miss something. Robb has a few blockbuster surprises in store, right up to the last, highly satisfying page. --- Reviewed by Kate Ayers

Published by Thriftbooks.com User , 17 years ago
In the fall of 2059, Lieutenant Eve Dallas of the New York Police and Security Department and her spouse billionaire mogul Roarke are on their way home from a business party when she receives a notice to report to Central Park's Belvedere Castle. Her partner Detective Peabody is already there when Eve arrives. She tells her it is a nasty crime scene with the victim laid out naked on an outcropping of rocks, badly beaten pre mortem, raped and strangled with a red ribbon, her eyes surgically cut out. Eve looks at the victim and believes that the killer will strike again; in all probability, the culprit has killed before. Psychic Celina Sanchez, who works the party circuit, tells Eve that she saw the crime being committed in a dream. Her details convince Eve that Celina is genuine. After more women are killed, Eve and Detective Peabody provide a television interview conducted by reporter Nadine Furst. The Lieutenant believes the killer will come after her but she miscalculates and the next victim is Peabody, making this case suddenly very personal to Eve and the entire NYPSD. J.D. Robb has written another exciting police procedural starring characters who readers have come to love and admire. There is a lot of action and romantic love scenes between the various couples but it is Eve with her steel spine and vulnerable soul that coaxes the audience to keep coming back to read the latest book in this terrific series. Eve, like other characters, has grown and changed over the course of the series and even Roarke, the perfect hunk of a husband, has learned to adapt to the life of a police officer's spouse. Harriet Klausner

Published by Thriftbooks.com User , 17 years ago
Now, if you are new to this series do NOT start with this book. You will be lost. Start from the beginning with Naked In Death. However, if you are an In Death fanatic like me, well then, dive right in! I cracked up on page 128 when Mavis and Leonardo ask a favor of Eve and Roarke. Read it. You'll see... Now page 238 was worth the entire book. In fact, I'll re-read it just because of this long awaited scene. Yes, Eve and Roarke's relationship was not as intense as the other books. But after the last book in this series, they needed a break. Don't worry. I'm sure Survivor In Death will find them fighting and making up. The only complaint I have is the long wait for the next book!
Copyright © 2020 Thriftbooks.com Terms of Use | Privacy Policy | Do Not Sell My Personal Information | Accessibility Statement
ThriftBooks® and the ThriftBooks® logo are registered trademarks of Thrift Books Global, LLC