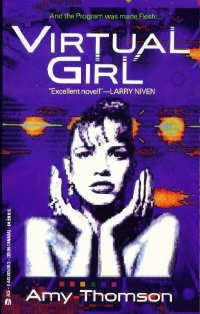 Arnold Dexter breaks the law when he creates Maggie, a robot companion who seems perfect in every way, but when Maggie is separated from her creator, she begins to become a sentient being. This description may be from another edition of this product.

Published by Thriftbooks.com User , 17 years ago
I read this book for the first time when I was in 5th grade, and I immediately fell in love with it. The first review listed on this page though isn't enitrely sure, so I am assuming that the person didn't read it very well as ***PLOT POINT PLOT POINT*** Maggie wasn't rejected by her creator, they were attacked and she thought he was dead, so she left him .***END POINT END POINT*** As for the other person who stated that the book offered nothing new, maybe when compared to other books out today it isn't unique, but when it was first released in the early 90's, it was very unique. I think this book is very good, and highly recommend it to any one who likes stories about humanity.

Published by Thriftbooks.com User , 18 years ago
This book is the flipside of Terminator 3. This is a humane, simple yet exciting story of a female android built by an ambitious male scientist who rejects her and leaves her to fend for herself in the Real World. This book is sensitive to both women and robots, and is a very good jumping-off point for new readers of feminist sf, mostly because Amy Thomson doesn't hit you over the head with complex feminist issues; by sending Maggie out to live her own life, Thomson creates a believable character who uses her personal skills (physical, mental, and eventually emotional) to build her own independent individual life. Highly recommended.

Wonderful portrayal of being a sentient being.

Published by Thriftbooks.com User , 24 years ago
This is a terrific book on what it is like to be a sentient being. The main character is flooded by information, like all of us and has to learn to survive. After the first 100 pages there is a detour in the book's strength, in that secondary characters are introduced who are sexual minorities. There may have been a reason for this, but it was a minor distraction. I would recomend this book to fans of basically sentient characters (like Robocop), fans of pursuit/suspense (like Dean Koontz and Jefferson Swycaffer novels), and to readers interested in artificial intelligence or just the mystery of being alive. Whenever I feel down I pick up this book or Shadows Fall by Simon Green.
Copyright © 2022 Thriftbooks.com Terms of Use | Privacy Policy | Do Not Sell My Personal Information | Accessibility Statement
ThriftBooks® and the ThriftBooks® logo are registered trademarks of Thrift Books Global, LLC