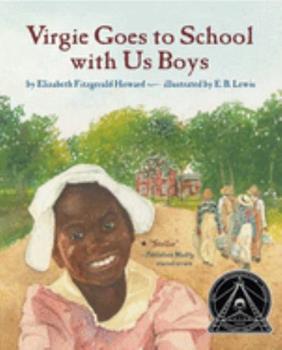 Virgie Goes to School with Us Boys

Virgie was always begging to go to school with us boys. "Papa, Mama, can I go too?" My brothers had doubts. School was seven miles away -- a long way from Mama. Virgie was scarcely big as a field mouse. How could she make the trip? And girls didn't really need school. But I got to thinking: Virgie was free like we were. Free to learn. And didn't girls need to know how to write and add too? Mama and Papa thought so. And one summer, they decided to...

Virgie Goes to School with Us Boys

Published by Thriftbooks.com User , 14 years ago
This is a story that takes you back to a time when the Civil War had just ended and slavery has ended as well. Virgie is a young girl who is trying to keep up with her five boys who go to school. She wants to go to school herself. Her brothers tell her things like, "girls don't go to school", "school's too hard", and such. Virgie is a very determined young girl. There is a lot of American history information in the story. It talks about things like, the Quakers, who were a religious group back in this time who had come over to America. This group of people helped out the slaves during this time. The story also talks about Abraham Lincoln, who was against slavery and fought to end slavery during his term. This story goes on to show Virgie in the field with her mother picking pole beans and talks about her stirring soap for her Mama. These were some of the many chores young slave girls were to do during this time. Virgie continues to ask her mother and father if she can go to school. This story is by Elizabeth Fitzgerald Howard who is telling a story about her grandfather's life during this time. Her grandfather is C.C. in the story.

Published by Thriftbooks.com User , 16 years ago
In VIRGIE GOES TO SCHOOL WITH US BOYS, a young girl is unable to go to school with her six brothers. After much begging, she finally convinces her parents that girls should be able to learn also and reassures them that she can travel the seven miles to the school run by the Quakers. Though one would imagine the journey is rough for a small child, little Virgie keeps up with her brothers and arrives at school with them, ready to learn. While this story is loosely based on the author's grandfather (one of Virgie's brothers), it symbolizes what many blacks must've felt during the Reconstruction period -- the need to use education as a stepping stone towards freedom. As with a lot of his other books E. B. Lewis uses the watercolor medium for VIRGIE GOES TO SCHOOL WITH US BOYS. His illustrations perfectly complement the story, bringing the reader into each page, and closer to Virgie and her family. Reviewed by Tee C. Royal of The RAWSISTAZ™ Reviewers

Published by Thriftbooks.com User , 16 years ago
My children always grow quiet with wonder when I read this tale of Virgie and her brothers, former slaves of the Reconstruction period following the Civil War. To learn to read and write, the boys travel seven miles each week to get to the school founded by Quakers (folks who love the Lord). They slosh through a river with their pail full of food and move silently through a dark wood. Their little sister Virgie longs to learn too and over the summer she lets everyone know it. After months of her prodding, Virgie's parents agree that she too is free and that even little girls needed to learn. Her big brother CC looks out for her on the trip (she falls in the river but doesn't cry) and enjoys her wonder upon seeing the school and the wonderful, beautiful bookcase full of books. "I'm going to read them all," she says touching them lightly. And from the wonderful writing of her descendant who wrote this book, we know that she must have. It's a beautiful story.

Virgie Goes to School with Us Boys: A learning experience!

Published by Thriftbooks.com User , 19 years ago
?Girls don?t need school.? This is the initial tone for Virgie Goes to School with Us Boys in the beginning. This book is honest with its stereotypes and use of language (considering the time it is set in), yet liberal in it?s moral. This book is sharp in its interpretation of how life was immediately following slavery, yet daring enough to portray life honestly and frank. The illustrations are vivid and clear allowing the reader to perceive Virgie?s(the main character)exact environment. As you read the book, the pictures draw you into the story as if you are another sibling for one of her brothers to pick on. The emotions on each character?s faces are clear as if you can read their minds. The watercolors bring the characters to life right before your eyes and portray life as realistic as a picture. Any child would get lost in the beautiful art in these illustrations, as well as learn a little something about the importance of learning.

review of Virgie goes to school with us boys

Published by Thriftbooks.com User , 21 years ago
Virgie Goes to School with Us Boys is notable for its subject matter and illustrations. The story concerns a young African-American girl in Post-Reconstruction Tennessee who hungers to follow her five older brothers to school; young African-American girls did not typically attend school during this time. The story is told in first person by one of the brothers, who is sympathetic to her cause. (Some of the brothers are against her accompanying them, and their comments add tension to the story--will their predictions come true?) The illustrations, watercolors by E.B. Lewis, provide an engaging yet gentle way into the text. The book provides a story interesting to young school age kids (is it possible that kids could actually yearn to be able to go to school?), and also an avenue to talking about social history. As a linguist, I especially liked the respectful yet accurate depiction of Black English Vernacular, which lends the book an evocative note. The book is 'officially' recommended for ages 4-8. Because of the history theme I would extend that to ten year olds.
Copyright © 2020 Thriftbooks.com Terms of Use | Privacy Policy | Do Not Sell My Personal Information | Accessibility Statement
ThriftBooks® and the ThriftBooks® logo are registered trademarks of Thrift Books Global, LLC