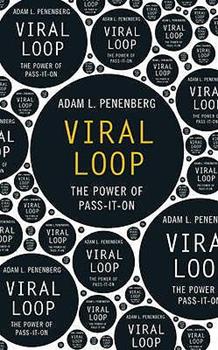 This description may be from another edition of this product. Here's something you may not know about today's Internet. Simply by designing your product the right way, you can build a flourishing business from scratch. No advertising or marketing budget, no need...

Published by Thriftbooks.com User , 11 years ago
Adam Penenberg first entered my radar in 2008, when an interview he wrote about Gina Bianchini (co-founder of Ning, a platform that lets you create your own social network) was published in Fast Company. In it, he also interviewed Marc Andreessen and introduced the rest of us to viral loops, showing how Ning was growing virally by virtue of a "double viral loop": every social network creator is a user and every user is a potential network creator. At the time of this review, there are nearly 2 million social networks on Ning. Penenberg breaks down his book in three parts: Viral Businesses, Viral Marketing and Viral Network. In the first part, he walks the reader from the original viral models (Tupperware and Ponzi schemes); through a fascinating story of the first online expansion viral loop which led to the introduction of Andreessen's Mosaic and, later, Netscape too; and wraps up with a detailed explanation of Ning, how it accomplishes its viral growth and the elements (technical and cultural) that make viral businesses possible. The Viral Marketing part, shares stories of Hotmail and the Diet Coke-Mentos Geysers video among others, giving interesting insights into accomplishing viral growth through marketing. The Viral Networks part takes up almost half the book. It dedicates individual chapters to the most successful networks that grew virally: I only wish he had dedicated more space to discussing Twitter. It was very interesting to read how initial stiff competition between PayPal and eBay (two of the companies covered) resulted in the latter buying the PayPal (dubbed as "the first stackable network" by Penenberg), after eBay attempted to go against them with their own flavor of the service. The book closes leaving the door open to the future, discussing the search for a new ad unit to adequately fit the new space of viral networks and privacy matters in this new era. Although I felt there was a missed opportunity to discuss more in depth about the importance of interactions between users (there seemed to be more emphasis on just number of users alone), if you want to understand of how companies like Ning, Facebook and Paypal have grown virally, this is a great starting point. Another title I recommend in connection with this one is Sarah Lacy's Once You're Lucky, Twice You're Good: The Rebirth of Silicon Valley and the Rise of Web 2.0, another great title that complements Penenberg's book very nicely.

Exciting Read, and Not Just for Would-Be Entrepreneurs

Published by Thriftbooks.com User , 11 years ago
I'm usually the last person to pick up a business book, but Viral Loop really got me hooked. Adam Penenberg tells the story of businesses that achieved stunning success by using the new forces of social networking. But it turns out that these forces are not so new after all: Viral Loop is also the story of how the Tupperware company used the old-fashioned kind of social networking--word-of-mouth and parties-- to expand into a cookware giant. If you like Malcolm Gladwell, you'll love Viral Loop, though I think Penenberg does a better job of tying everything together and revealing the big picture. It's also just a good story, as you watch these innovators and entrepreneurs struggle with failure--and success--and rivalries and see how they often didn't realize at first what was so great about their great idea. The book is also about the ways in which technology is changing our lives--for better or for worse--and how creativity meets technology, with world-changing results.

Published by Thriftbooks.com User , 12 years ago
VIRAL LOOP is a must for anyone in PR and Marketing. This is one of the first non-business, business books I've read. Penenberg serves up his prose with a side of French fries, giving the reader a window into this new world of social networking with anecdotal stories that stay with you long after you finish the chapter. This does for virality what FREAKANOMICS did for economics.

a powerful lesson for anyone working in the digital space

Published by Thriftbooks.com User , 12 years ago
Penenberg deftly explores the viral growth of businesses through a few historical stages. Tupperware is a good early example, but the book really takes off when he delves into the dawn of the web, a period the author has a tremendous grasp on. He knows this history and the people who shaped it as well as anyone, and brings to it a shrewd analysis that carries through to the more current examples. Unlike too many other books in the category, it is extremely well-reported. For someone who grew up alongside the Internet, reading the book gave me a richer understanding of the developments that brought us to the current stage. It's impossible not to notice that without a Web there is no Mosaic there is no Netscape there is no IE there is no Google there is no Myspace, Flickr, Facebook, Twitter, there is no whatever's next. Every one of those businesses grew in a strikingly similar way. Which means that the next ones will as well; a powerful lesson for anyone working in the digital space. Viral Loop is a rare business/tech book that looks back lucidly at the past, is astonishingly relevant to what is happening TODAY, and won't seem the least bit dated in the coming years--if anything, I bet it'll seem prescient.

Who said business books have to be boring?

Published by Thriftbooks.com User , 12 years ago
As a marketing director who has been challenged to grow my business rapidly -- and in new distribution channels -- I found this book to be an excellent resource. Penenberg writes about some of the most spectacular success stories in business history, all of which grew incredibly fast by incorporating what he calls a "viral loop." As he puts it, companies such as Skype, Facebook, PayPal, and eBay, grew because their users spread their product for them -- with no need for a marketing budget! But this book it's not just a bunch of boring case studies. Penenberg tells GREAT stories. Even if you aren't interested in marketing or business I bet you'd like this book. Viral Loop is challenging--it's not dumbed down by any means--yet it's really fun; it's informative but also entertaining. I defy you to read the prologue with the founders of HotorNot and not laugh out loud in spots. Who said business books have to be drab and boring?
Copyright © 2020 Thriftbooks.com Terms of Use | Privacy Policy | Do Not Sell My Personal Information | Accessibility Statement
ThriftBooks® and the ThriftBooks® logo are registered trademarks of Thrift Books Global, LLC