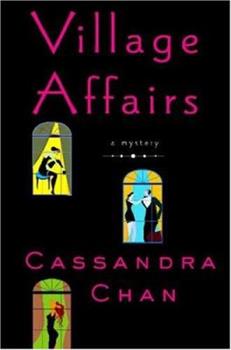 (Book #2 in the Phillip Bethancourt and Jack Gibbons Mysteries Series)

Ambitious Scotland Yard detective Sergeant Jack Gibbons hears about his latest case---the death of a middle-aged widower in Chipping Chedding, a small town in the English Cotswolds---and can't believe his good luck. His best friend, wealthy man-about-town Phillip Bethancourt, just so happens to be in Chipping Chedding already, accompanying his model girlfriend on a fashion shoot on a country estate. Since Phillip has helped Jack on numerous occasions,...

Published by Thriftbooks.com User , 13 years ago
My mom reads mysteries, nothing else. Over the years, I've gained a fair bit of knowledge about the genre from performing reader's advisory for her to bring home books she would enjoy. When a book is especially enticing, I will also try to read it. Such was the case with Cassandra Chan's debut novel The Young Widow and, now, her second Bethancourt and Gibbons mystery Village Affairs (2006). Detective Sergeant Jack Gibbons usually works on cases surrounding the London area under Detective Chiefe Inspector Carmichael. However, when a small town in the English Cotswolds delegates an investigation to Scotland Yard, Gibbons finds himself driving the Chipping Chedding to investigate. Man-about-town Philip Bethancourt, Gibbons' close friend (though not close to Jack's social status), is in Chipping Chedding before the investigation starts accompanying his girlfriend, Marla Tate, on one of her fashion shoots. Already being on the scene,Bethancourt sees no reason to not try and help the police investigation along. Bethancourt has, after all, been known to help Gibbons in past cases--no matter how much his dealings with murder might enrage Marla. In the beginning, the police are hard-pressed to even say there was a crime. The middle-aged victim, Bingham, appears to have suffered from an unfortunate accident rather than foul play. As Gibbons and Carmichael go about tying up loose ends, they unearth more questions than answers. Who was the secret girlfriend that Bingham had driven to see on the night of his death? How had the quiet man managed to hide his vast fortune from all of his neighbors? Even though evidence is thin, it begins to seem that this routine investigation of accident is fast becoming a murder investigation. The primary risk of a mystery series is that the plots, and on some level the characters, will veer toward the formulaic. Happily, Chan has no such problems. Village Affairs creates an entirely different plot and, to a lesser extent, a different tone than that found in The Young Widow. Even the landscape, Chipping Chedding instead of London, is unique. While this novel continues to deal with Gibbons' and particularly Bethancourt's personal lives, Chan also dedicates a fair bit of time to creating entertaining characters to populate the story. A personal favorite is Clarence Astley-Cooper who acts as Bethancourt's gracious if eccentric host during the investigation. My only qualm is that Jack Gibbons, my favorite of the duo, did not get as much "air time" during this installment as during The Young Widow though, of course, both characters were still extremely entertaining. Chan's unique verve and dry wit are once again present in her dialogue, once again providing a unique writing style in Village Affairs. It was also interesting to see more about Philip and his girlfriend Marla, who actually plays an active role in the investigation this time. Their relationship, falling somewhere between ideal and dysfunctional, adds an interesti

Published by Thriftbooks.com User , 14 years ago
Scotland Yard Sgt. Jack Gibbons is suffering from a breakup with a woman he'd expected to marry and he's drinking a little too much. He needs a good case to absorb his interest. One appears when his best friend, wealthy Philip Bethacourt goes, with his model girlfriend, into the country for a fashion shoot. Charlie Bingham, a neighbor of his host, dies under suspecious circumstances. Philip can never resist "assisting" Gibbons with his investigations. It is an intriguing case. Charlie lived simply but was really a wealthy inventor. He has one daughter he seldom sees, and a mysterious woman friend no one knows anything about. There are assorted interesting villagers - a vicar madly in love with his beautiful wife, a handsome artist known for his suductions, and other local characters. It's a lovely modern day classic detective story with moving and intriguing portrayals of the characters. For example, Charlie, the first victim, never appears as a live character in the book, but I felt such sadness as I read about his funeral. I also enjoyed the previous book, "The Young Widow," that featured these detectives and I'm anxious to get the next one.

Published by Thriftbooks.com User , 15 years ago
Scotland Yard Detective Sergeant Jack Gibbons is heartbroken that Annette Berowne dumped him. Marla Tate suggests to Jack's best friend affluent Phillip Betancourt that they help the cop come out of the doldrums by surrounding him with attractive females. However, Jack has a court appearance so can not join his pal amongst the fashion models in the Cotswold. However, Jack and Detective Chief Inspector Wallace Carmichael head to Chipping Chedding in the Cotswold to investigate the death of Charlie Bingham, a successful inventor. The deceased apparently died from mixing sleeping pills with whiskey, but Jack has found anomalies like the body being moved by the fireplace that makes him suspect a homicide occurred. As he investigates what he believes is murder, his boss, his friend, a local cop, and a wannabe sleuth entangle the case with confusion, as what is evidence becomes difficult to filter from what is a red herring and a blunder. Though it lacks the Wimsey of Lord Peter's mysteries (as much of the key cast is stereotyped), the second Gibbons tale (see THE YOUNG WIDOW) once again reverently brings Dorothy Sayers into the twenty-first century with a delightful Cotswold cozy. The story line is fun as Jack finds the biggest obstacles to solving the case are the myriad of silly sleuths. Fans of Ms. Sayers will enjoy Jack's look into the wealthy businessman's VILLAGE AFFAIRS and other dealings. Harriet Klausner
Trustpilot
Copyright © 2022 Thriftbooks.com Terms of Use | Privacy Policy | Do Not Sell My Personal Information | Accessibility Statement
ThriftBooks® and the ThriftBooks® logo are registered trademarks of Thrift Books Global, LLC